Investing in Cannabis Companies That Care

There’s no way around it: Cannabis is becoming a massive industry.

Early investors have already made billions of dollars. And judging by recent forecasts, there are going to be tens of billions more coming in just a few short years.

The global cannabis market is predicted to grow to $66.3 billion by 2025. And the total addressable market — all the people who’d buy it if they could — is estimated at over $340 billion right now.

Canopy Growth Corporation (NYSE: CGC) made headlines this April when it announced it would purchase U.S. multi-state operator (MSO) Acreage Holdings for a massive $3.4 billion.

And just this Monday, Cronos Group (NASDAQ: CRON) announced it would buy four subsidiaries of Redwood Holding Group for around $300 million.

But there’s a seedy underbelly to all this growth. And it’s one that Cronos’ recent announcement has brought right to center stage.

Damn the Torpedoes! Full Speed Ahead

Nearly all of the cannabis company acquisitions in the past have been paid for by selling stock on the open market. It’s called a secondary offering.

It’s a trick often used by real estate investment trusts (REITs) to keep debt low and drum up cash for new investments. But REITs pay a dividend, something most cannabis companies don’t.

Shameless self-plug: I uncovered the one and only cannabis investment that guarantees you a profit through steady payments. We're up over 500% but there's still way more to come. Click here to learn all about it.

So when a REIT issues new shares, it also has to pay more money out to shareholders. More shares mean more dividends. And more dividends mean more total distributions. So management has to be careful not to put out so many shares that it can’t maintain the payments.

But most cannabis companies don’t work that way. Issuing more shares doesn’t really cost the company anything. Sure, it’s got to pay some fees to underwriters. But it can often cover those with more stock or options to buy stock at a later date.

So cannabis companies have been running wild with this accounting trick. But there is a cost associated with all those new shares hitting the market. And it’s paid by people who invest in the company before the secondary offering.

Without any thought of the consequences, cannabis CEOs are diluting the shares and the gains of the very same people who helped their companies grow so large.

And the effect on share price is anything but unnoticeable...

I’ve always heard that the right image has far more power than thousands of the right words. So I want to give you a couple images that really put the dilutive tactics of these cannabis companies into perspective.

Here is an image of the market capitalizations of two of the cannabis companies I mentioned earlier: Canopy and Aurora. Looks like a pretty solid investment in 2018, huh? 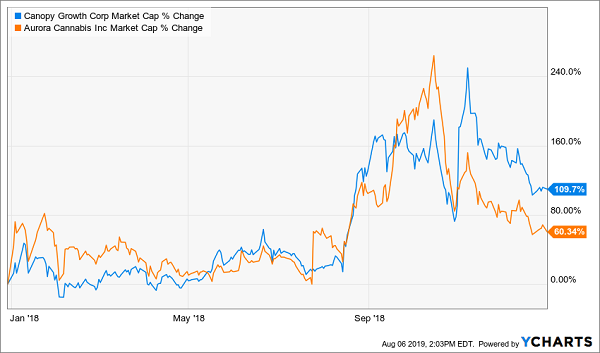 Canopy was up over 100%, and Aurora was up a solid 60%. If investors took home those kinds of profits, what am I complaining about?

But then you take a look at the real chart. This one shows how individual shares of the companies fared during 2018: 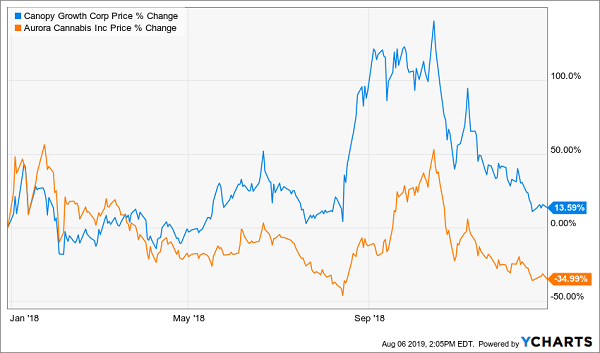 Not so pretty anymore, is it? Canopy shares only gained around 13% last year. And Aurora shareholders lost nearly 35% of their money.

So why the difference? Well, here’s another chart of the two companies that shows how market caps can swell while share price plummets: 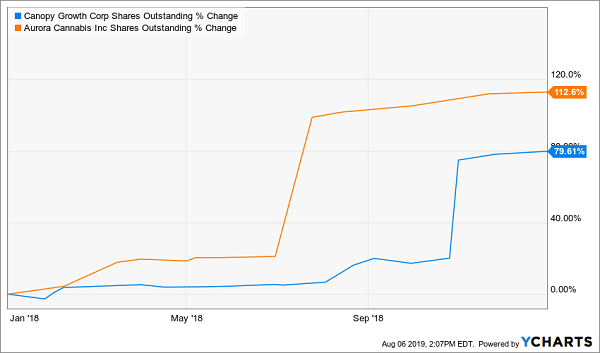 Aurora and Canopy both grew their market caps by nearly doubling the number of shares on the market. And with each secondary offering, original shareholders lost more and more value.

But the companies got rich! Canopy is holding on to nearly $2 billion in cash right now. That’s enough to cover more than half of its purchase of Acreage.

But that’s not how the company is going to fund the deal. Nope. In fact, only about $300 million will be paid in cash. The other 91% of the payment will come in the form of newly issued Canopy stock.

That’s going to boost the share count by about 20%. And it’s going to cost early investors millions once again.

But there’s one company out there still looking out for its shareholders. And the deal announced Monday shows just how different management at Cronos is from the other major names in the market.

“Don’t Worry, We're Buying This Round.”

You see, Cronos will be paying for nearly all of its recent acquisition with cold, hard cash. And why shouldn’t it? The company got a major investment from Altria (NYSE: MO) late in 2018. And it’s flush with walking-around money right now.

Cronos is sitting on a war chest worth $1.81 billion. That’s nearly as much as Canopy. And it’s putting that cash to actual work instead of stealing more from current shareholders.

Plus, thanks to management’s shrewd use of cash on hand, Cronos’ long-term debt looks like pennies compared to Canopy. Cronos owes about $15 million. But Canopy is in debt up to its ears with over $700 million.

And yet Cronos is paying for its expansion with cash, and Canopy is issuing more shares to dupe investors into thinking they’re still making money.

Cronos could take on debt. And it could flood the market with cheap shares and eat away at current investors’ profits. But it’s not.

It wants to be the cannabis company that cares about the people who made it. Not just the insiders, but us retail investors who had enough faith to put our hard-earned money into the stock.

But investors don’t seem to see this side of the industry yet. And that’s why Cronos stock is such a deal right now.

Over the past six months, shares dropped with the rest of the cannabis industry. And right now, they’re sitting over 30% lower than they were in February.

But this is the one major cannabis company that’s shown it values its investors. And that’s going to show through in share price appreciation.

And that’s why I recommend a position in Cronos Group (NASDAQ: CRON). I can see it recovering that 30% in no time thanks to strategic purchases and a management team that places value in the shareholders who put them in charge.

But there’s another company I’m following in this industry that could give investors the kinds of gains we saw during the early days of legal cannabis. Far more than 30% or even 100%.

I’m talking about life-changing profits like investors got from GW Pharmaceuticals when it got approval to market the first cannabis-based drug... 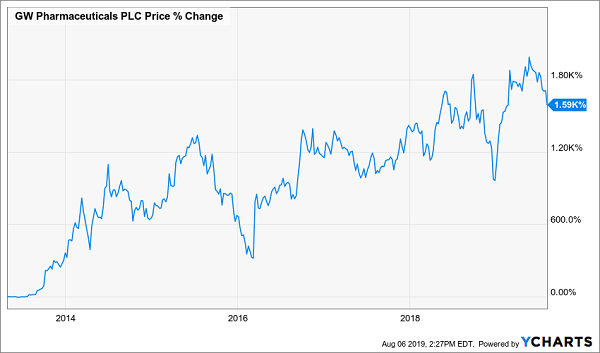 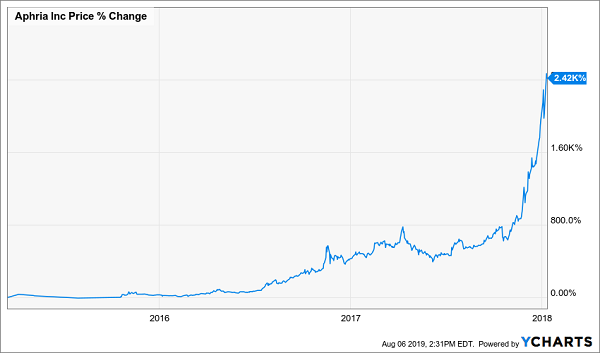 Folks who saw the writing on the wall and invested a few grand walked away with hundreds of thousands. Every $10,000 turned into $2.43 million. Even just a thousand dollars would have netted you a profit of $242,000.

That’s life-changing money. A thousand-dollar investment in either early-stage company could have paid off your mortgage or sent your kids to college.

If you’d put $10,000 in, you could be reading this from the deck of your yacht or the patio of your new vacation property. A $100,000 investment, and you'd be calling me for private investments and not even worrying about the stock market anymore.

And that’s exactly the same kind of potential I’m talking about now. Even a conservative investment in this tiny, under-the-radar stock could fund your entire retirement or make you an accredited investor.

But the people who made those massive gains on GW Pharma and Aphria weren’t buying big, expensive names. They were buying a company with shares trading for way less than $1. They were taking a risk because they saw what the future was bringing.

And that’s just what I’m encouraging you to do today. I see the writing on the wall. It’s no longer a question of if but rather when cannabis will become legal around the world.

It’s no longer a debate whether the U.S. will legalize at the federal level. It’s a question of how the legislation will take shape.

Legal cannabis is a foregone conclusion. The only questions left are which companies will fare the best in the new market.

And that’s why I’m so enthralled by this one. It’s not trying to break into the same parts of the market controlled by established players like Cronos. Instead, it’s found a niche it can absolutely dominate that will make it indispensable to those big companies running the show.

In fact, this company is the only publicly traded one of its kind. And it’s also the biggest in the industry by far. And soon the services and products it provides are going to be required by law across the U.S., if not the entire world.

It’s the only company of its kind big enough and ready to handle the next frontier of cannabis legalization: the entire United States.

And it’s currently trading right around where Aphria and GW Pharma were before they blew up and made early investors multimillionaires.

It’s got the perfect set of catalysts coming to drive it from a penny stock to the biggest player in its industry. And I want to help you get invested before it takes off like so many cannabis stocks before it.

There’s way too much information for me to cram into this short article. So we’ve created a report you can read at your leisure that will give you access to this 1,000% profit opportunity that's all but guaranteed.

But make sure you act quickly. You can see from the charts of Aphria and GW Pharma that it only takes the right news and a couple of days for shares to shoot up hundreds of percent.

And every penny added to your entry price cuts into your final profit. So don’t delay another second.

Take a few minutes to read this report and get yourself set up to reap the massive rewards only early investors get to take home.