In the past weeks, we’ve been assaulted by a deluge of terrible acts perpetrated by humans against fellow humans. The two most recent that stick in my mind are the case of the Stanford rapist, Brock Turner, and the horrific events that unfolded in Florida this past weekend.

With that in mind, I’d like to focus on solidarity and compassion for our fellow community members by sharing some ideas about how (even through our investments) we can take a stand against such negativity. I’ll cover both events. But since the one from this weekend is freshest in everyone’s minds, that’s what we’ll talk about today.

By now, there’s pretty much no chance you haven’t heard about the tragic events that unfolded this past weekend at a popular nightclub in Orlando, FL.

A single shooter armed with a semiautomatic assault rifle killed almost 50 people and injured dozens more before being killed by police. My heart goes out to all involved and everyone who lost a friend or family member. I hurt with you, and I cry with you as well.

I would also like to point out the bravery shown by survivors as they helped get those who were injured to the nearest hospitals, as well as the heroism of the officers who responded.

Put Your Money Where Your Heart Is

Nobody can say for sure why the shooter did what he did. But what can be said is that now, more than ever, is the time to stand in solidarity with the LGBT community and show that no matter our differences, we support them as our fellow humans.

Right now, there are all sorts of ways to support the LGBT community that was devastated by this most recent mass shooting. There are protests, rallies, sit-ins, candlelight vigils, even fund-raising campaigns for NGOs involved with the community and for resources to help pay for medical bills and support the families of the fallen.

But there’s another way we can stand up for the people who’ve suffered and died that you may not know about.

There are literally hundreds of companies — both private and public — that support equality through contributions to organizations that stand up for the LGBT community, and thousands more supporting it through corporate governance that prevents workplace discrimination based on gender identity and sexual preference.

Here’s a link to the corporate partners of one of the biggest and most outspoken civil rights NGOs — Human Rights Campaign — and another to the full list of publicly traded companies that stand up against discrimination in the workplace.

But to make it a little easier to invest in companies that both support LGBT rights and will provide decades' worth of growth for your portfolio, I’ve narrowed the list down to my top five favorites. These are the cream of the crop. They not only support equality, but are standout investments on their own merits.

Not only is this stock one of Warren Buffett’s favorites, but it’s also a staunch supporter of LGBT equality. The company is a “Platinum Partner” with HRC and contributes both funding and resources to the advancement of civil rights in America. It also scores a 100% on the Corporate Equality Index for being LGBT-friendly in its corporate governance. No discrimination allowed at Coke.

But it’s not just a feel-good investment, either. Coke sports some pretty impressive fundamentals along with its pretty impressive moral stance. With a price-to-book ratio (P/B) of 7.8, a trailing price-to-earnings ratio (P/E) of 27.1, and an enterprise value to EBITDA (EV/EBITDA) of 18.1, it’s a value investment even Benjamin Graham could get behind. Plus, it sports a solid dividend yield of 3.04%, so you’ll not only get price appreciation, but you’ll also get quarterly payments for your stand against inequality.

Diageo, the makers of Ketel One Vodka, are also “Platinum Partners” with HRC in the fight against inequality in America. The company supports equal rights movements across the country and also scores a 100% on the Corporate Equality Index. Everyone’s equal when it comes to this giant distiller.

And the company makes for a great addition to any portfolio, too. Sin stocks (think alcohol, tobacco, and pornography) typically make investors lots of money. When times are good, people like to party. And when times are bad, people look for an escape. That means companies like DEO stand to grow no matter the economic landscape.

Plus, this distiller has an enviable PEG ratio of 3.13 and, like Coke, pays investors a solid dividend (2.43%) to help them fight against inequality.

Accenture is an information technology services company that, like our first two inequality-fighting companies, supports the HRC through both funding and resources. It also scores a 100% on the Corporate Equality Index due to its support of civil rights movements across the country and anti-discrimination corporate policies.

But again, it’s also rocking some pretty solid fundamentals and makes a great addition to your portfolio. The PEG ratio of 2.2 is even better than Diageo, and its debt levels of almost nothing make it a sweet investment. I mean, it’s got a debt-to-equity ratio less than 1 (0.4, to be exact). That makes it the least leveraged company on our list.

And in the most recent quarter, investors were handed a 92% year-over-year earnings growth rate. That should be enough to get everyone excited. On top of all that, it even pays a nice little dividend of 1.87%, so you can have some extra cash to support other organizations.

Coming in at number two on the list of the best investments to fight inequality and make a profit at the same time is Bill Gates’s baby, Microsoft. Just like our first three investments, MSFT nailed a perfect 100% on the Corporate Equality Index and supports HRC as a “Platinum Partner,” donating both funding and resources.

Also like the first three I’ve mentioned, Microsoft is another solid addition to your portfolio. It’s been around for decades. Despite slowing down substantially from the time when the desktop revolution was propelling growth in the triple digits, it is still standing strong.

The price-to-book ratio of 5.24 suggests the stock is undervalued by the market. Then there’s the dividend yield of 2.8% that suggests management is still doing a good job of handing out paychecks to investors. And my personal favorite metric for valuing a company, EV/EBITDA, is at an enviable level of 11.4. That’s pretty low for any company, but especially low for one in the software industry.

That’s right, Mr. Gates’s arch-nemesis tops the list of the most LGBT- and portfolio-friendly stocks trading on U.S. exchanges. Again, we’ve got a management team that supports HRC as a “Platinum Partner” by providing mountains of funding and also supports the movement with resources and employee contributions as well.

And after the nasty dip Apple stock took over the past year, it’s an amazing value for investors and a must-add to your portfolio. Across the board, it’s got the best valuation metrics on the list. I’m talking about a P/E ratio below 11, a P/B ratio around 4, EV/EBITDA at 7.11, and a PEG ratio just above 1. Those kinds of numbers on a manufacturing company would have Benjamin Graham drooling.

If tech companies had existed when he wrote his book, then those numbers might make him swoon with excitement. You’d really be hard-pressed to find a better investment or a more undervalued value stock on the market. Tack onto that the fact that management is doing the right things when it comes to equality in America (and around the world) and the 2.3% dividend yield, and you’ve got yourself the best kind of investment.

Hands down, Apple is the best stock you can add to your portfolio to stand up against discrimination, support the LGBT community in this time of strife, and make yourself some serious long-term profits. 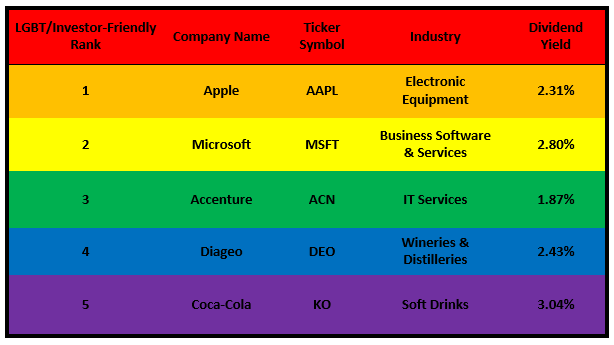 There you go — the five best ways to support both the LGBT community and your future retirement by investing in inclusive companies.

Now, go do some good in the world and make yourself some green while you’re at it.

Next time, I’ll address the injustice that was the sentence doled out in the Stanford rape trial, and I’ll give you some more ways to take a stand, speak out, and make yourself a tidy profit at the same time.

Until then, take care of yourselves and each other. And remember, we’re the only ones who can end injustice in the world. And the only way to do it is by encouraging others through our own actions.

To investing with integrity,