How the Racial Wealth Gap Makes Us All Poorer

For the last three weeks, chants of "No justice, no peace!" have echoed across hundreds of American cities as millions of people have taken to the streets to protest against police violence after the killings of black citizens George Floyd and Breonna Taylor by white officers.

It’s a simple chant, but it’s hard to argue with its underlying logic. Racial injustice feeds civil unrest. It’s a pattern which we’ve seen again and again — in Baltimore in 2015 after the killing of Freddie Gray by police, in Los Angeles in 1992 after the near-killing of Rodney King, and across the country in 1968 after the killing of Martin Luther King, Jr. by a white supremacist.

And police brutality is far from the only injustice black Americans live with.

Systemic racism has also given rise to a shockingly large racial wealth gap in the United States. And that gap has grown significantly in the last three decades. 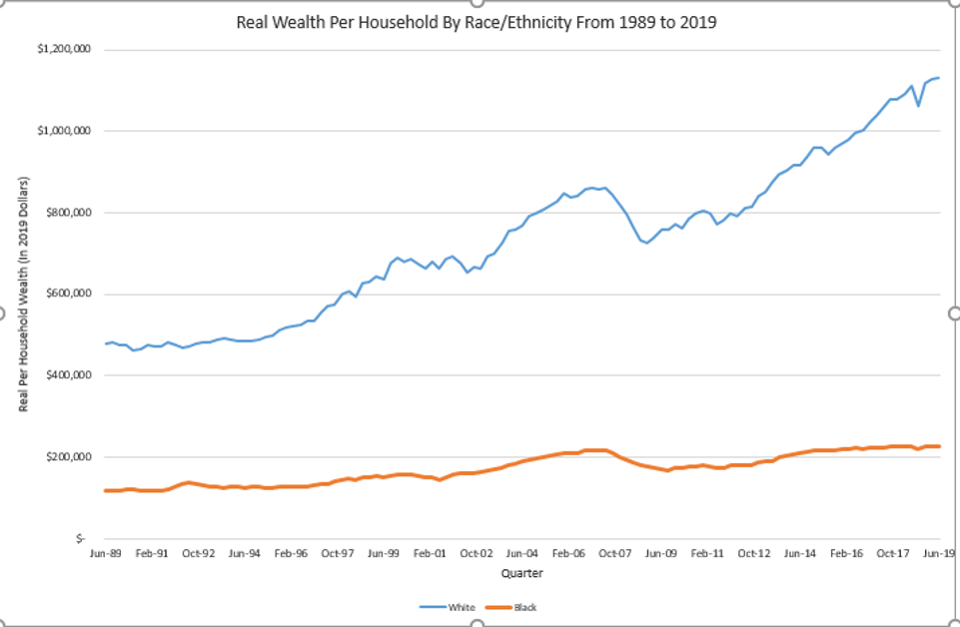 The COVID-19 recession is making the divide even more apparent. As my colleague Jason Stutman wrote in a recent article:

The timing of these protests should not be taken out of context. We just spent the last several months under a near nationwide lockdown, spiraling headfirst into an economic depression. Black Americans in particular have reported being furloughed and laid off at higher rates…

America’s racial wealth gap has a variety of causes, including racist government policies, historical inequities, and subtle forms of discrimination in the labor and credit markets which persist to this day.

I don’t claim to have the solution to this worsening social crisis. But I’m using my column this week to discuss the historical origins of the racial wealth gap, its destabilizing effects on America’s present-day economy, and the ideas which black economists and financial experts have put forward to help black people overcome economic racism.

To look at where the racial wealth gap’s earliest origins, we have to go all the way back to the end of the Civil War and to the federal government's broken promises to freed slaves that defined the Reconstruction era.

He famously canceled General William Tecumseh Sherman’s Special Field Order, No. 15 — a proclamation that promised every freed black family “40 acres and a mule” out of land confiscated from former slave owners — shortly after he took office in 1865.

More attacks on the political infrastructure of Reconstruction followed. Congress defunded the Freedmen’s Bureau, an agency providing education and humanitarian aid to black citizens, in 1872.

Reconstruction itself abruptly ended in 1877, when Republicans abandoned most of their civil rights agenda in exchange for Democrats allowing the election of Rutherford B. Hayes after the disputed 1876 election.

The U.S. government only became more incompetent in its handling of economic race relations from then on.

During the Great Depression, President Franklin Delano Roosevelt created the Home Owners' Loan Corporation (HOLC) as part of the New Deal. The corporation’s purpose was to refinance distressed mortgages in order to prevent foreclosures. But it ended up having a much more sinister effect on the American economy.

As part of its operations, HOLC created maps to assess the credit-worthiness of homes in different towns and neighborhoods. These maps, generated by white civil servants who often held racist personal beliefs, were color-coded by race, and majority-black areas were marked in red and designated as “hazardous.” 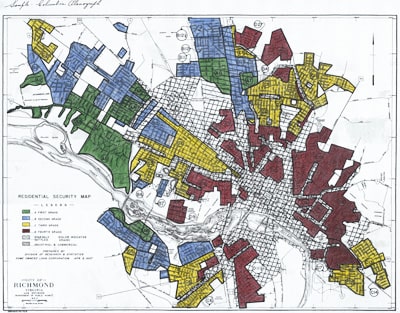 This practice of “redlining” — illustrated in the HOLC map of Richmond above — reinforced housing segregation and contributed to the formation of capital-starved “ghettos” in many urban black neighborhoods which exist to this day.

In sum, the federal government played a significant role in preserving and even expanding the racial wealth gap in the 19th and early 20th century. But the private sector isn’t without guilt, either…

How the Credit and Labor Markets Have Contributed to Racial Inequality

Many of these black homebuyers were fairly wealthy and would have qualified for a normal mortgage with a low, fixed interest rate. But lenders, for no discernable reason other than racism, made a concerted effort to unload variable-rate subprime loans on them.

And when the interest payments on variable-rate mortgages rose to unaffordable levels in the late 2000s, they caused a wave of foreclosures to hit black neighborhoods — disproportionately destroying black wealth.

Housing finance isn’t the only area of the economy in which black Americans have encountered racism recently. In fact, labor market discrimination persists in subtle forms to this day.

In their 2005 best-seller Freakonomics, University of Chicago economist Steven Levitt and journalist Steven Dubner wrote about an experiment in which they sent fake résumés to various workplaces with a variety of traditionally white-sounding or traditionally black-sounding names.

They found that the résumés with white-sounding names got significantly more callbacks, implying that managers often have subtle racial biases in their hiring decisions despite laws forbidding racial employment discrimination.

As you can see, America’s racial wealth gap originates from a labyrinthine series of racial injustices in both the public and private sectors.

Its primary victims are, obviously, black Americans. But there’s a simple economic argument to be made that it makes all Americans poorer, regardless of their skin color…

How the Gap Is Making America Poorer

In my previous Wealth Daily article, I touched on the multiplier effect of consumer spending.

Consumer spending accounts for more than 70% of U.S. GDP — largely because each dollar you spend creates several dollars in total economic output. When you buy a snack at a convenience store, the store owner gains a dollar and can then spend that dollar on his own wants and needs. Multiple people are enriched by the transaction.

Conversely, when people don’t spend money — because they don’t have as much of it due to systemic inequalities, for instance — the lack of spending depresses GDP by more than the amount that would’ve been spent.

In other words, if we somehow magically erased the racial wealth gap in this country, consumer spending would be significantly higher, and the American economy would grow significantly faster.

Consulting firm McKinsey studied the hypothetical impact of closing the racial wealth gap in a 2019 report and found that it would increase GDP by 4% to 6% in the next decade. 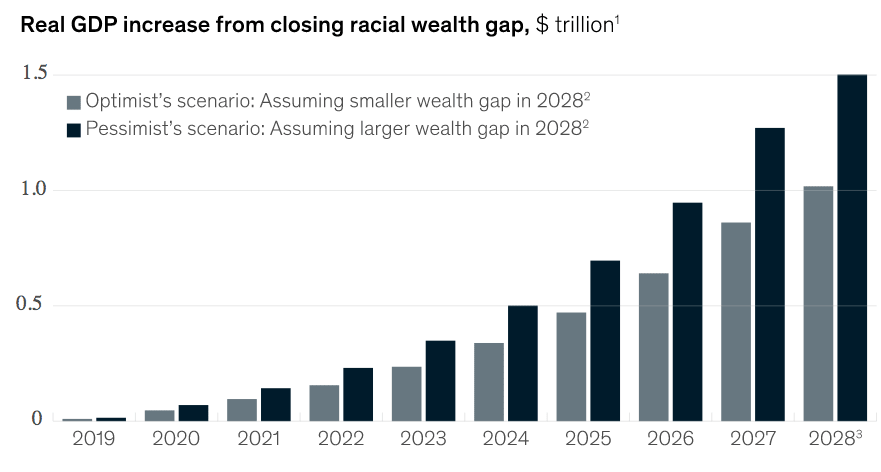 However, it’s worth repeating that these hypothetical scenarios involve a quick elimination of the racial wealth gap in the next few years. How would we accomplish that, exactly?

I certainly don’t have the answer, and I’m not going to speculate about it here. That’s partially because, as a white guy, I don’t have personal experiences of economic racism. I didn’t grow up in a redlined neighborhood, I’ve never taken out a subprime loan, and I highly doubt that the name “Samuel Taube” has scared off any potential employers throughout my career.

Instead, below I’m going to highlight some economics and personal finance books by black authors who are better informed on this topic than I.

In The Black Tax: The Cost of Being Black in America, entrepreneur and philanthropist Shawn Rochester attempts to estimate the percentage of income black earners lose due to racial discrimination — the titular “black tax.” He then lays out a framework that Americans can use to eliminate this “tax” and help create an estimated 6 million jobs and 1.4 million businesses that are missing from the black community

Journalist Shomari Wills is the author of Black Fortunes: The Story of the First Six African Americans Who Escaped Slavery and Became Millionaires.

And on the personal finance side of things, Starting Point: How to Create Wealth That Lasts is worth a read. In it, financial coach, teacher, and first-generation college graduate Kevin L. Matthews lays out a clear path, based on his own experiences, for average Americans of any race to build wealth with simple budgeting and investment techniques.

Here at Angel Publishing, we strive to enrich readers regardless of their skin color and contribute to a mutually prosperous future in the process.