How the Caps on Bank Dividends and Share Buybacks Affect You

Federal Reserve Chairman Jerome Powell has not been the most reassuring figure for investors as of late. In fact, his frank assessments of the post-coronavirus economy have caused some large one-day drops…

But Powell is just doing his job. He’s giving the best economic forecasts he can based on the extensive data available to him as the head of our country’s central bank. And like it or not, that data suggests we’re not out of the woods quite yet.

The financial sector in particular is expected to face strong headwinds in the coming months, even if COVID-19 magically disappears. To that end, the Fed announced last week that it’s capping bank dividends and suspending share buybacks through the end of the third quarter.

Let’s look at why the central bank made this dramatic decision, and what it means for you as an investor.

Why the Fed Is Capping Bank Dividends and Share Buybacks

The Dodd-Frank Wall Street Reform and Consumer Protection Act, better known as Dodd-Frank, is a regulatory overhaul of the financial sector passed during the Great Recession.

It’s a complex piece of legislation, measuring more than 2,300 pages long, and one of its most important components is the introduction of annual stress tests for big banks.

In these tests, the Fed simulates a severe economic contraction (like the current one) and evaluates banks’ performances in the scenario based on its current position. Then, it publishes the results for all to see.

This year’s tests were the first ever to simulate a downturn that is also playing out in real life. It involved a peak unemployment rate of 19.5% and $700 billion in loan losses. The results were… mixed — not calamitous, but not particularly encouraging either.

The Fed’s report indicates that while most of the industry can absorb the hardship, several banks “would approach minimum capital levels” in the harsher scenarios simulating “U-shaped” (slow) or “W-shaped” (unsteady) recoveries from the COVID-19 recession.

In order to sure up these banks, the Fed implemented measures to limit their capital outflows. Namely, it suspended financial-sector dividend increases and share buybacks through the end of September, and capped dividend payouts at an average of the last four quarters’ net income.

With all this in mind, how dire is the condition of the financial sector? And what do these new rules mean for your portfolio?

What the Fed’s New Bank Regulations Mean for Your Portfolio

In these unprecedented times, no financial prediction can be made with certainty, but the current shock isn’t likely to cause a sector-wide banking meltdown like the one that followed the collapse of the subprime mortgage market. And that’s largely thanks to Dodd-Frank.

The law’s stress tests, capital requirements, and other provisions have encouraged banks to deleverage significantly over the last decade. Four of the five biggest banks have cut their debt-to-equity ratios by at least 25% since 2010. 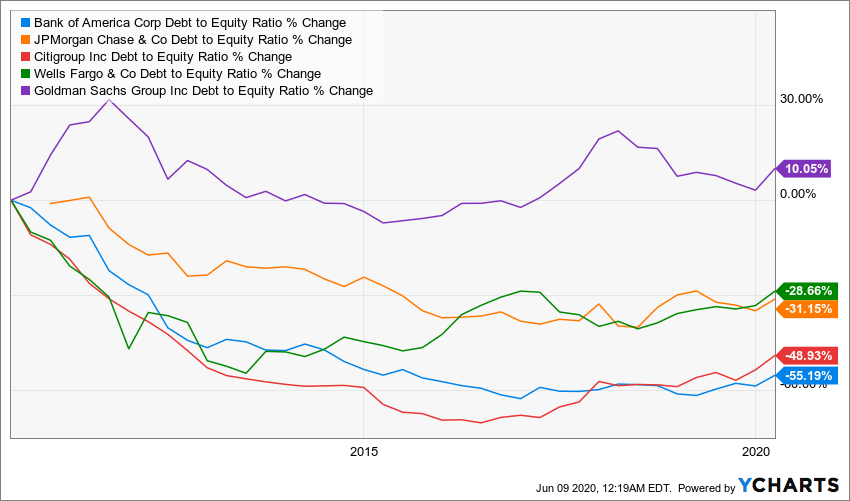 And the uptick in loan loss rates under this year’s testing regime follows years of declines. Lenders have gotten steadily better at planning for mass defaults since the Great Recession. 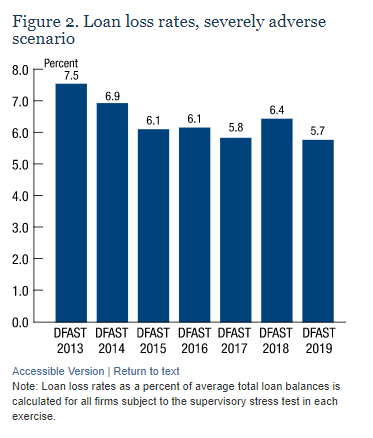 Between these incremental reforms and the emergency measures implemented last week, the financial sector seems equipped to survive the current crisis even if some banks, like profit-starved Wells Fargo (NYSE: WFC), are likely to take a dividend cut due to the Fed’s cap.

It's worth considering the implications of the massive loan losses that the Fed simulated in this year’s tests because it represents people going bankrupt and defaulting on their credit cards, auto loans and mortgages.

And that human suffering is not confined to the Fed’s models. Since February, in this country alone, 40 million workers have lost their jobs. Americans hold a record $930 billion in credit card debt, and the proportion of those accounts in hardship programs like deferment has skyrocketed 10,000% from a year ago.

If Congress can’t queue up another round of consumer stimulus, like the $1,200 checks it mailed to taxpayers in March, then the nation could face a wave of personal bankruptcies and a collapse in consumer discretionary spending.

We’re already seeing these effects in the recent bankruptcies of clothiers J.Crew and J.C. Penney — the latter of which I predicted in a mid-March Wealth Daily article.

In summary, bank stocks are probably not the best bet for dividend investors for the next few months. Wells Fargo in particular should be avoided, especially because the Fed may order it to cut its dividend due to its 90% decline in profits in the first quarter.

For dividend investors looking for safe yields, check out The Wealth Advisory, our flagship income investing newsletter. Editors Briton Ryle and Jason Williams currently boast an average gain of 88.71% on every trade, even during these dark times. Click here to learn more.