It's Time to Invest in Hemp

Hemp supporters were excited to see the move after previous bills of a similar nature failed to pass. But I'm not so sure I'm willing to celebrate such a decision.

After all, the simple fact that one needs permission from the state to grow a plant is absolutely absurd.  Especially when you consider the fact that hemp is such an amazing gift from God and offers such a wealth of economic, environmental and health benefits.

Now while you can certainly buy hemp seeds at your local supermarket, you generally can't grow hemp here in the United States.

You can grow genetically modified corn and soy, then bathe it in glyphosate – which has been linked to everything from cancer to miscarriages to the disruption of human sex hormones – but you can't grow hemp, which has been used for centuries to make fiber, paper, oil, rope, wax and even fuel. It also grows quite well without synthetic pesticides and herbicides. 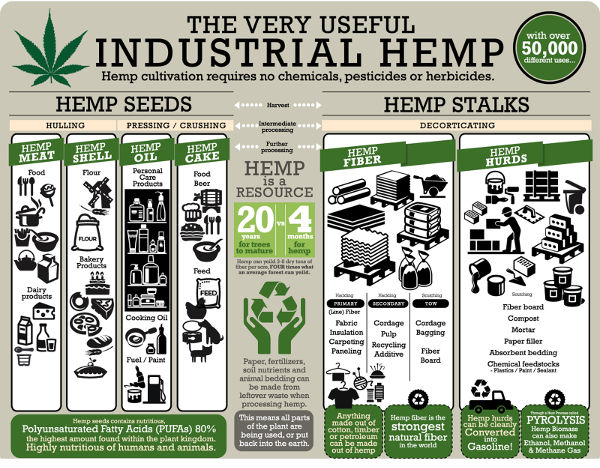 As an advocate of natural law and personal sovereignty, I have a huge problem with the government outlawing this simple, yet remarkable plant. I also have a problem with this from the perspective of an investor.

Today, nearly all hemp products in the U.S. have been imported from Canada and China. In 2014, this was about $610 million worth, or just a small portion of the multi-billion-dollar market that currently exists worldwide.

But here's the rub …

There are some states in the U.S. that offer excellent growing conditions for this crop, including Kentucky and South Dakota. But instead of allowing farmers in those states to grow this high-value crop on their own property, the most those farmers can do is hope for a change in federal law that would end all restrictions on the cultivation of industrial hemp.

Sure, in 2014, the federal farm bill allowed for individuals states to grow and harvest hemp - in conjunction with their state departments of agriculture for research through pilot programs. So basically just another stalling tactic in the war against cannabis.

As an investor and entrepreneur, I'm disgusted by the fact that the government has essentially disallowed me to directly profit from the farming and harvesting of industrial hemp in the U.S. Which, by the way, is a lot more environmentally-friendly than the growth of industrially-produced, heavily-subsidized corn, soy, and cotton. In fact, unlike cotton, which can only be grown in warm climates with enormous amounts of water, hemp can be grown in all 50 states and requires very little water.

The Power of Hemp

Still, here's what the Congressional Research Service has to say about hemp …

...the U.S. market for hemp-based products has a highly dedicated and growing demand base, as indicated by recent U.S. market and import data for hemp products and ingredients, as well as market trends for some natural foods and body care products. Given the existence of these small-scale, but profitable, niche markets for a wide array of industrial and consumer products, commercial hemp industry in the United States could provide opportunities as an economically viable alternative crop for some U.S. growers.

While the Congressional Research Service notes that hemp can provide an economically viable alternative crop for some U.S. growers, I believe it can provide much more.

An environmentally-superior industrial crop that offers health benefits for consumers and financial benefits for farmers absolutely represents an investment opportunity that is both ethical and profitable. And I for one will not hesitate to pounce on such an opportunity. You shouldn't either.

In the meantime, check out this short video about the power of hemp its countless uses: