Greed Has Never Been Better

A few weeks ago, I received a reader response mildly chastising me for taking on what he referred to as a "greed is good" tone in an article I wrote about Mongolian oil exploration.

To those of you who are not instantly reminded of where this phrase comes from, let me jog your memory:

Greed, for lack of a better word, is good. Greed is right, greed works. Greed clarifies, cuts through, and captures the essence of the evolutionary spirit. Greed, in all of its forms; greed for life, for money, for love, knowledge has marked the upward surge of mankind.

Now, I know what you're probably thinking right now...

How dare this financial publisher, this self-proclaimed provider of financial advice and sound investing possibly be advocating more of the same behavior that landed this nation, and most of the developed world, into a financial disaster the likes of which only my grandparents' generation can remember first-hand?

Well, let me be the first to tell you that I'm not advocating irresponsibility or the blind quest for the bottom dollar.

That's the exact opposite of what I'm doing.

Greed, you see — the kind that Mr. Gekko spoke about 23 years ago, and the kind that is now being credited with sowing the seeds of global economic calamity — is actually the only thing that will ever pull us out of this death spiral.

The desire for more than is required for basic survival has driven human endeavor up to this point.

The constant quest for more, for better, for quicker, faster, and more potent satisfaction has been the impetus behind all human greatness.

And contrary to what my detractors will go to their grave screaming, it's not greed, but the lack of greed; the lack of personal ambition; the increased reliance on credit in place of productivity; the increased appetite for saturated fat over muscle-building protein, that has landed us in this mess.

If all of us had been working, laboring, greedily searching out opportunities and carrying them through to fruition instead of sitting around and waiting for the next wave of success to land on our heads as it did when our parents and grandparents passed it off to us...

We would be growing now — not declining.

I grew up in a working class family, went to public school, and had maybe 15 square feet of personal space in the house which I shared with my parents and siblings.

Today I'm my own man: the employer of dozens of talented, ambitious individuals, and a creator of both wealth and yes, I dare say, tax dollars.

Among my friends are immigrants from all the world's continents; self-made men and women who were not satisfied with what they were born into...

Individuals who, through this concept called "greed," pulled themselves and their families into the rarified air of wealth.

Greed is, therefore, the most human of instincts.

The drive for more than the bare minimum is what took us out of the caves, compelled us to go from hunting wild animals with obsidian-tipped spears, to planting and harvesting crops, to manufacturing food products in factories...

Greed pushed us to go from horses to cars to planes.

It led the first voyagers to the new world; the American settlers west; and eventually, took us to the moon and beyond.

And it will compel us to make the next step forward.

Greed is good, ladies and gentlemen — and specifically in times like these, it's never been better.

Because this is no longer just a quest for your readership, but a quest to salvage that element of our character that made this nation into the superpower we still remember it to be...

I am now appealing to you to toss aside this politically correct misconception that anything done for money is necessarily done to the detriment of everything and everyone.

Profit for your kids. Profit so that the next generation knows to do the same.

Profit to help finance the next period of growth, the next golden age in history.

Profit because not having what you need, when you need it, is just another form of oppression.

Because it should be clear now that success isn't handed out anymore...

It has to be created.

As those of you who've been following me through the years know, I'm big into gold.

It's rare and it doesn't corrode; because of these two basic characteristics, it's been the go-to metal of the wealthy for millennia when it comes to storing value.

But if you're greedy in the best sense of the word, simply storing away your dollars in a precious metal versus a bank or a stock isn't good enough anymore.

To the truly greedy — to those who will not let recession or inflation stand in the way of their financial freedom — gold can also be the great deliverer.

Which is why I'm writing to you today about a company that has embraced this philosophy at its absolute fullest.

Gold's blown up in the last ten years: 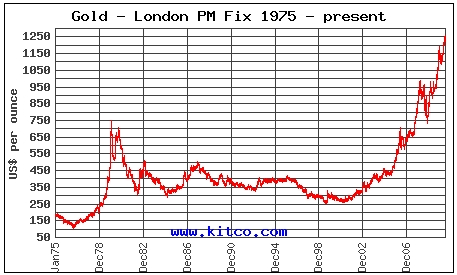 In fact in the last decade — while physical gold has blown away the Dow, crushed the NASDAQ, trounced tech giant Microsoft, and even outpaced Google from the very first days since the search icon's 2004 IPO — the companies that have been on the front lines of finding and mining this gold have left both the metal itself (and just about every other industry) in the dust.

Take a good look at the gains, but pay special attention to the hold times:

The company I discovered just a few weeks ago, however, has taken this concept to the next level...

A mining exploration company based in Idaho, my new discovery only trades for 21 cents and has a market cap of $19 million.

But as this outfit barrels headfirst directly from the exploration stage to the mining stage (skipping the middle drill testing stage), they're about to repeat history.

This move is a controversial one by most standards and considered "reckless" by a few experts. It's been done once before by a mining outfit known as Rochester resources.

Just take a look at what "controversial" or "reckless" looks like in the hands of those who know what they're doing:

Let me ask you this: Does that look like the downfall of human civilization to you?

To me, a corporate policy of aggressive pursuit of resources may seem greedy, but it's also the only way to succeed.

This holds true for individuals, for companies — and yes, for entire nations.

Right now, this company owns and operates one 3900 acre site located in the western flank of the White Pine Mountains, about 40 miles west of Ely, Nevada.

Geological analysis of the area has set an annual production target of 36,000 ounces, for the next 8 years.

That means that even at today's gold prices — and with a production cost of $450/ounce — this company expects returns of at least 150% per year, every year, for the life of the project.

But the reality is far more striking.

Gold could be at $3000 by the end of the year, and the mineral densities of the surrounding land makes the preliminary geological analysis pale by comparison.

Here is just a partial list of their neighbors in Nevada, the most fertile gold mining region in the world:

In all likelihood, when this outfit executes its highly aggressive production schedule, this 21 cent stock has the potential to blow up, making up to 9 times more than their initial estimates — and banking investors as much as 1350% per year, for a total return of 10800% in the next 8 years.

For a full profile on this company, and the incredible opportunity they've opened in Nevada, you'll need to read my upcoming report.

But before you do, answer these 3 questions — not for me, but for yourself:

Are you going to be greedy, and create the future for yourself and your family that you've dreamed of?

Are you going to follow the advice of Warren Buffett, and leverage a recession into a windfall?

Or are you going to go down the path of fear and wait for somebody else to take care of you?

You already know where I stand.

P.S. For those of you already invested in gold, or looking for alternatives in high-yielding precious metals investments, I've just received long-awaited news from a Mexican Silver company that just happens to be sitting on the world's biggest carbonate-replacement deposit.

Carbonate replacement deposits are superior to all other geological formations in silver densities... And as Mexico becomes poised to become a top silver producer once again, this tiny North Mexican company will be leading the charge with lightening-fast triple digit gains.

For the full report, including company name and ticker symbol, click here.