20% of Global Gold Production at Risk

South Africa was the largest producer of gold and other precious metals for more than half a century — with almost half of the world's reserves — until China surpassed it in 2007.

It is still the world's third-largest producer, with 20% of the total.

The largest gold reserves in the world were pulled out of mines found near Johannesburg. 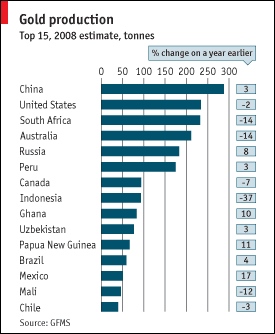 When I was last there around the turn of the century, gold was selling at $250 an ounce.

The price of the precious metal had reached its nadir after selling off for two decades — a slow and crushing grind that drove gold bugs to the point of extinction.

At the time of my last visit, the largest skyscraper in Johannesburg had been taken over by squatters.

Entrepreneurs had recently invented a car-based flamethrower that could fry would-be carjackers.

Nelson Mandela was stepping down, and both blacks and whites worried about race riots, chaos, and the future.

It was in this atmosphere that I rode a series of old rusty elevators and beaten skids into one of the oldest, deepest, and most famous gold mines in the world: Durban Deep.

The miners I met there impressed me on many levels.

These were not people to be taken lightly...

They worked without shirts in the heat and dripping water as they attacked a three-foot-high 30-degree plane of rock with heavy pneumatic tools.

Their quest: a seam of gold a millimeter thick.

It was expensive, back-breaking, and dangerous work.

In the dim light created by naked bulbs and headlamps, these men looked hard, as if made of iron. Fierce.

They didn't enjoy the fact that I was interrupting their work...

Three weeks ago, 34 miners were killed by police during a strike at Lonmin's Marikana platinum mine.

Many were shot in the back as they were running away, or run over by police vehicles.

The African National Congress, the party of Mandela, responded to these protests by charging the 270 surviving miners with murder, a critical blunder of epic proportions.

In the aftermath, South African platinum mines were closed.

The price of physical platinum launched as shares of the mining companies crashed.

(Readers of my Options Trading Pit service were able to leverage this knowledge into an 83% one-day gain.)

News out today says the strikes are getting worse.

Four gold miners have been shot by police using tear gas and rubber bullets to break a picket line.

According to the Wall Street Journal:

Since the Lonmin strike began, illegal protests have broken out at Anglo American Platinum Ltd.'s Thembelani mine, when several hundred workers refused to go underground, and one at a mine belonging to Royal Bafokeng Platinum Ltd., which briefly halted operations, in the middle of August.

Most recently, strikes spilled into the gold sector last week. Gold Fields Ltd. said workers at its KDC east mine put down tools amid complaints about local union leadership, and remain on strike.

The price of gold is compounded by Ben Bernanke's recent inaction at Jackson Hole, the deteriorating situation in Europe, and China's quest for a “soft landing.”

The gold chart is reflecting the new situation on the ground: 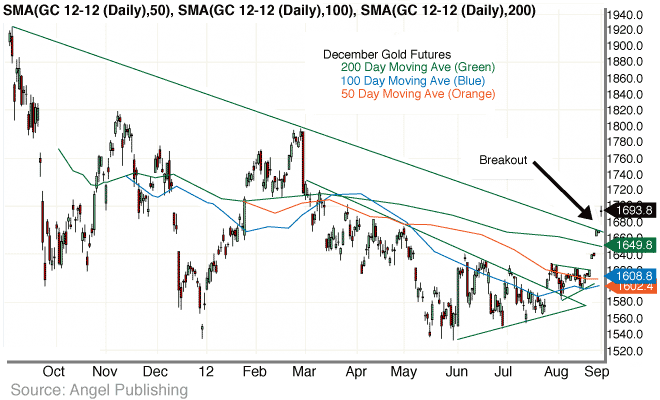 It looks like it will make a run at the all-time high in dollars over the next three months — $1,900.30 set last August.