Too Much Money, Not Enough Gold

Gold prices are on the verge of a significant breakout.

But it’s not because the U.S. national debt just passed $15 trillion, Europe’s about to announce its next doomed-to-fail bailout plan, negative real interest rates, or anything that will keep gold headed much higher in the long run...

It’s much simpler: There’s too much money and not enough gold.

This has happened a few times before. Each time, gold prices surged and silver prices exploded.

And now, it’s about to happen all over again.

The gold bull has had new life breathed into it this week.

Even though gold prices have ticked down a bit, a number of large banks have upped their gold price targets.

Goldman Sachs advised in a report on Monday, “Given our U.S. economists’ cautious economic outlook and the significant downside risks associated with the European turmoil, additional Fed easing might well be needed.”

As a result, Goldman increased its 12-month gold forecast to $1,930 an ounce. Credit Suisse jumped in, too, upping its near-term gold price target to more than $1,800 an ounce. Standard Bank in London has targeted gold to hit $2,200 per ounce within the next four months.

These increased forecasts will have a significant impact on the near-term gold price.

Here’s why — and the bigger opportunity they’re failing to tell their clients about...

The gold bull market has self-reinforced its way to steadily newer highs throughout the last decade.

As with most financial assets in pre-bubble stages, the higher gold prices get, the more investors want it.

The same has held true in the financial markets.

As gold prices were setting record highs this summer, investors were putting more and more money into ETFs, funds, and everything related to gold and precious metals.

ETF Securities Inc. — a world leader in exchange-traded commodity products — tracks inflow and outflows of exchange-traded securities. It found inflows to precious metals funds climbed by $7.2 billion in the third quarter, the largest quarterly increase in over a year.

But it’s massive compared to the size of the gold market.

Too Much Money, Not Enough Gold

One of the key tenants of the gold-boom-bubble is that the gold market is an extremely tiny one.

The total value of all gold produced since the beginning of time is only about $9 trillion. Sounds like a lot, sure... but it’s not.

The worldwide action of central banks to print money hasn’t done much for the economy, but it has kept asset prices up.

The table below shows that despite gold’s record run, it’s still just a tiny sliver of total investment around the world: 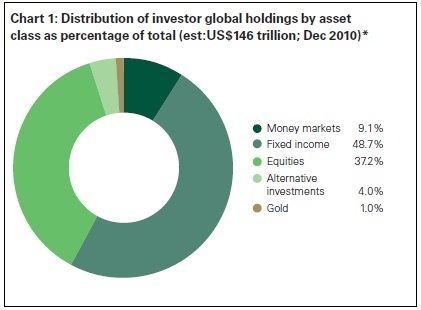 As the gold bull market grows stronger, gold prices rise, and investor demand accelerates, the percentage of total assets gold will eventually make up will be 5% to 10% or more.

After all, all of the major banks that manage and advise trillions of dollars' worth of assets cannot keep recommending gold without it becoming a more significant part of their clients’ portfolios. It’s just not going to happen. Gold prices must go up with demand.

To be clear, while the big banks may be waving the “buy gold” flag once again, gold isn’t even the best place to ride out the gold bull.

Silver and Gold : The Great Divide

Sure, gold prices are going higher. But the gains won’t be too big.

That’s why silver is in a much better position.

They’ve been leap-frogging consistently over the past three decades without either asset falling too far behind or getting to far ahead.

Now, though, silver has fallen way behind. Since April, gold is up 15% and silver is down more than 30%.

The divergence cannot and will not last. And a continued rise in gold prices — driven largely by the big banks encouraging investors to plow millions more dollars into a small gold market — will get silver moving up again.

And when silver snaps back, it’s going to come back extremely fast.

The primary driver for a near-term leap in silver prices is the gold/silver ratio.

Based on the number of ounces of silver an ounce of gold is worth, this ratio has stayed within a moderate range over the past 30 years. 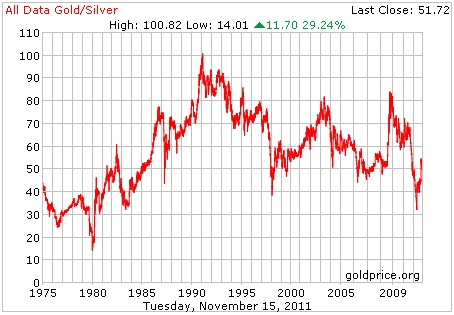 The real value of the ratio is it can guide investors to buy gold and silver at far better prices than they would by following each metal individually.

The current ratio is at the higher end of the scale. It’s simply saying silver is cheap relative to gold in historical terms. And silver currently has much more upside potential than gold.

If the ratio were to fall back to 14 as it was in 1980, silver would have to rise four times if gold did not go up at all.

Of course, history is just a guide.

There are many more reasons to expect silver to outperform gold in the months and years ahead...

Over the long run, the gold/silver ratio is going much, much lower. As a result, any rise in gold prices will be magnified even more so than the 4-to-1 example above.

Again, the reason is simple: In time, there won’t be enough gold to go around... but there’s even less silver.

On the supply side, silver is not keeping up.

Investment demand for silver has been making up an ever-increasing part of the precious metals investment pie.

We noted ETF Securities reported $7.2 billion of investment went into gold last quarter earlier. They also found $1.4 billion of that was into silver. (ratio: 3-to-1)

There are so many reasons to like gold right now.

The current gold/silver ratio is at the higher end of its long-term range at 53. That’s enough to give silver four times the upside potential of gold.

The supply/demand fundamentals, however, show the gold/silver ratio could go even lower.

When the ratio reaches the point where silver fundamental supply and demand are matched, it will reach a low well below 10. That gives silver even more upside potential than gold.

The big banks are betting large sums on gold. Eventually they will be proven right, as the gold market is so small that it will be swamped by this surge in investment dollars...

But the biggest gains will be had in silver.

Buy silver. And buy it consistently.

The current dip cannot and will not last forever.