Legendary hedge fund manager George Soros is double downing his bet on gold, even though he considers the market to be a bubble.

Back in late January, at the World Economic Forum, Soros called gold "the ultimate asset bubble."

He failed to mention, however, that his hedge fund had recently more than doubled its position in the yellow metal.

The New York-based firm became the fourth-largest holder in the ETF when it increased its stake in GLD to 6.2 million shares, worth $663 million at the end of 2009. 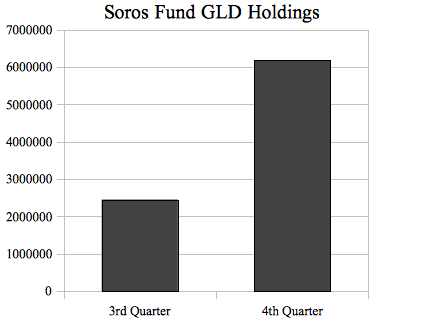 But last month, in comments delivered on the fringe of the World Economic Forum, Soros said: "When interest rates are low we have conditions for asset bubbles to develop, and they are developing at the moment. The ultimate asset bubble is gold."

Soros and other noted investors such as John Paulson have previously touted gold as a hedge against inflation, further economic turmoil, or a decline in the value of the U.S. dollar.

With each share representing a 10th of an ounce of gold, Paulson's hedge fund firm controls the equivalent of about 96 tons of gold, exceeding the holdings of Australia and Kuwait.

It's dumb not to follow to the smart money on this one. Ownership of physical gold along with the quality mining stocks will become one of the hottest investments on the planet.

The investment upside for quality gold stocks has never been better. I recommend looking for underpriced gold stocks with solid management, tight coporate structure, and sizable resource base in geopolitically safe regions, such as Idaho's Boise Basin or Canada's Abitibi Greenstone Belt.

My collegue Luke Burgess recently uncovered a small $27 million gold company that's sitting on a gold resource in Idaho worth $727 million. This resource, along with near-term production, could drive share prices over 920% higher in the next few months. These are the kinds of high-reward plays to look for.

The early adopters who wisely purchased their gold positions before the masses come will sleep well at night while others fret and worry as they watch the purchasing power of their savings evaporate like water in an Sahara desert.

The SPDR Gold Shares ETF is a great way to own the metal. Total assets held by the SPDR Gold Shares ETF have grown 2.2% this year after surging 24% in 2009. They stand at over 1,100 metric tons. Only the central banks of the United States, Germany, Italy, and France and the International Monetary Fund hold more gold.