Four Reasons to Hedge Your Bets

The End is Nigh

"I have a bad feeling about this..."
— Princess Leia

Emails were recently leaked from Wal-Mart, and they were not good.

Last week, Wal-Mart's Vice President of Finance and Logistics Jerry Murray wrote: "In case you haven't seen a sales report these days, February sales are a total disaster. The worst start to a month I have seen in my seven years with the company."

He went on to blame the low sales on the 2% hike in payroll taxes and a tax return delay.

Maybe so, but sales are down either way.

Wal-Mart is a leading indicator. When sales are down at Wal-Mart, it means that people aren’t buying... and that's bad news for the economy.

And then we get news this week about the housing sector, which the mainstream media tried to paint as a good thing.

I realize Yahoo! is in the bag for Obama, but check out this headline:

Housing ‘Taking a Breath’ as Starts and Confidence Decline

2013 is proving to be a tough year for housing.

U.S. housing starts fell 8.5% in January, missing their expectations of -3.1% by a long shot, the Commerce Department reported Wednesday. On Tuesday, the National Association of Home Builders said U.S. homebuilder (sic)confidence declined slightly in February, falling from five-year highs for the first time in 10 months.

Selling a 8.5% drop in housing starts as “taking a breath” is absurd.

I immediately put out an alert to Option Trading Pit members to buy puts on Toll Brothers (NYSE: TOL). It was down 6.5% when I wrote this. The puts were up 45% in six hours.

The Yahoo! comment section is priceless, by the way:

“Thank you Yahoo that great Headline !! Like putting sugar powder on dog #$%$ and calling fudge” — Josh

“Spin, Spin, Spin, that's all the Main Stream Media knows how to do.” — Francis

When it costs $70 to fill your tank, that's $30 many people aren’t spending on pizza night. It also raises costs and cuts margins for a whole lot of businesses.

High gas prices have led every sell-off in the S&P 500 over the past five years. 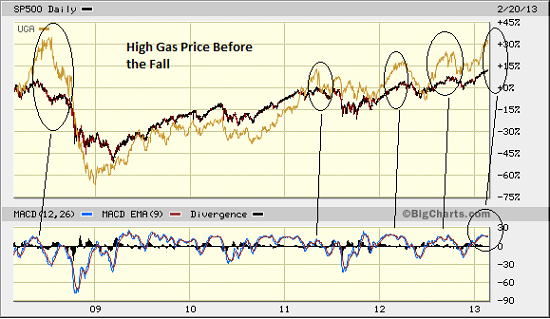 And lastly, we have an Elliot Wave scenario.

Ralph Nestor Elliot was a market psychologist and theorist who died in 1948. I won't go into depth, but his theory is the herd buys and sells on market psychology, and it runs in waves.

Now, I'm not an Elliot Wave theorist, but this looks like a classic textbook example...

Here is the current S&P 500 with the waves outlined: 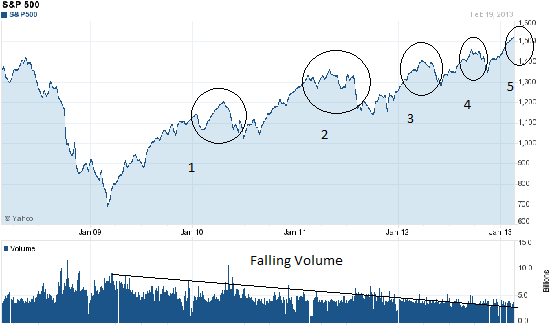 As you can see, we are in the fifth wave.

Wave 5: Wave five is the final leg in the direction of the dominant trend. The news is almost universally positive and everyone is bullish. Unfortunately, this is when many average investors finally buy in, right before the top. Volume is often lower in wave five than in wave three, and many momentum indicators start to show divergences (prices reach a new high but the indicators do not reach a new peak). At the end of a major bull market, bears may very well be ridiculed (recall how forecasts for a top in the stock market during 2000 were received).

I'm not a seer. I don't practice Santeria. But bad retail, bad housing, high gas prices, and a five-year high in stocks might portend a correction.

One way to profit is to buy stocks that benefit from high oil prices.

Or you might consider hedging your long positions with some put options.