It's Going to Get Worse

It's not just subprime and Alt-A that we have to worry about any more. It's prime, too.

And Morris A. Davis, a real estate expert at the University of Wisconsin may have just hit the nail on the head with his comment, "Foreclosures were bad last year? It's going to get worse."

Yep, just as we've been warning about - the next phase of the real estate disaster is upon us. It's only shifted from subprime to Alt-A to prime. And with many economists predicting that unemployment will rise into the double digits from 8.9%, foreclosures will only accelerate, says the NY Times, which will add to bank losses, which will add pressures to the financial system and broader economy. 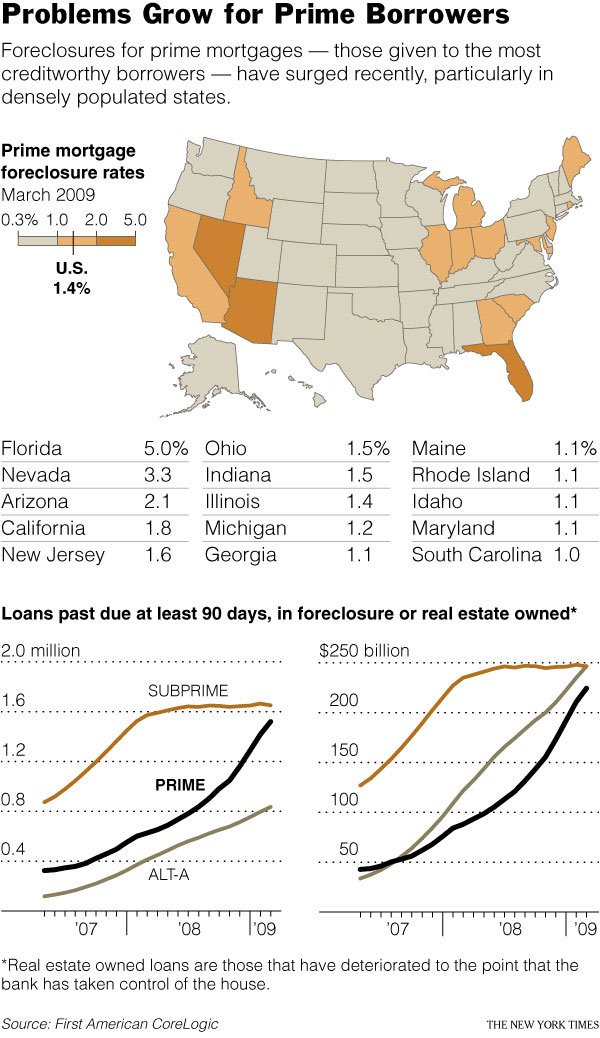 Here's more from the article.

"We're right in the middle of this third wave, and it's intensifying," said Mark Zandi, chief economist at Moody's Economy.com, according to the article. "That loss of jobs and loss of overtime hours and being forced from a full-time to part-time job is resulting in defaults. They're coast to coast."

From November to February, the number of prime mortgages that were delinquent at least 90 days, were in foreclosure or had deteriorated to the point that the lender took possession of the home increased more than 473,000, exceeding 1.5 million, according to a New York Times analysis of data provided by First American CoreLogic, a real estate research group. Those loans totaled more than $224 billion.

During the same period, subprime mortgages in those three categories increased by fewer than 14,000, reaching 1.65 million. The number of similarly troubled Alt-A loans - those given to people with slightly tainted credit - rose 159,000, to 836,000.

Over all, more than four million loans worth $717 billion were in the three distressed categories in February, a jump of more than 60 percent in dollar terms compared with a year earlier."