Elon Musk: Are His Gloves Off... or Is He Just off His Meds?

Elon Musk is at war with his home state.

California, the place that was cool, hip, modern, and progressive enough to become the base for Tesla Motors (NASDAQ: TSLA), has now become his sworn enemy.

Luckily, the timeline of the escalating hostilities can be tracked, down to the minute, thanks to modern internet technology.

Last week, after the Tesla CEO threatened to move his factory to a state that's allowing an end to the COVID-19 lockdown, California Assemblywoman Lorena Gonzalez fired a social media shot across Elon's bow with a three-word tweet:

He didn't take long to respond with an even shorter tweet.

But, unlike Gonzalez, whose power is more or less limited to making viral social media posts, Elon took it several steps further.

First, he ordered the reopening of the Alameda County assembly plant in defiance of the state-wide lockdown order. Second, he filed a lawsuit against the county itself.

"Tesla is restarting production today against Alameda County rules," he tweeted this past Monday. "I will be on the line with everyone else. If anyone is arrested, I ask that it only be me."

For the workers, attendance is strictly voluntary, but support for this move came from high up in the California chain of command.

When asked to comment during his daily coronavirus briefing, the governor himself, Gavin Newsom, claimed to be unaware that the Tesla plant had restarted operations. But he added that he hoped the company would get the go-ahead from the county the following week.

That same day, in the complaint against the county, Tesla argued: "The county is making rules that directly contradict and undermine the policy announced by the governor in his orders. The county's orders should be declared void and without legal effect."

The battle between the famously science-minded Musk and the COVID-19-fearing world spilled into the ether in ways nobody could predict.

One voice among many that rose in opposition to the billionaire's unbending will was none other than Ken Jennings of Jeopardy fame. 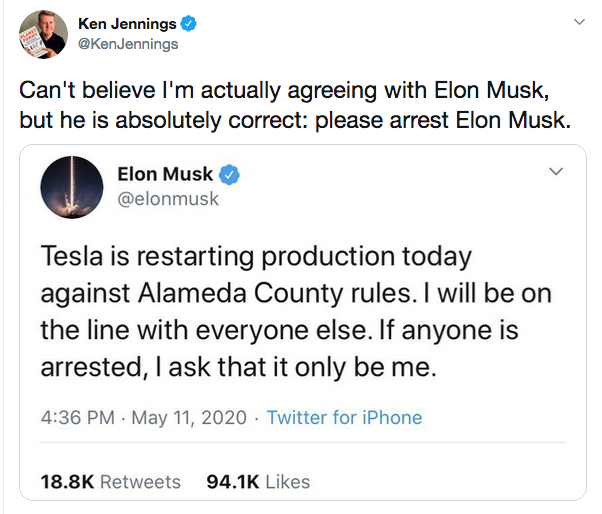 When prodded even by the most minor of celebrities, Elon proved once again that he doesn't back down. He responded in short order, sending Ken and his opinions straight back to the early 2000s.

Funny Twitter battles aside, it appears Elon is plenty serious about his threats to leave California.

Last week, in another bizarre tweet, he announced to the world that he was getting rid of all his material possessions in an effort to free himself and his mind of useless physical encumbrances.

While many took this as yet another one of his marijuana-addled rants, this week, it appeared that he's making good on his threats. And it's lining up quite nicely with his announcement that he and his interests will be bidding goodbye to the Golden State for good.

As of this morning, Musk has put no fewer than five California properties on the market, with a total asking price of $102 million.

Whether he plans to live in a rented apartment or out of an as-of-yet unreleased Tesla minivan remains to be seen, but all the signs point to one thing: He's had enough of the world's fifth largest economy.

Now, let's get things straight here, folks: We're used to Elon Musk's outbursts and tantrums by now, but this goes far beyond his basic tendency to release non-public information or voice his less-than-sane opinions on the nature of life in the universe via popular social media outlets.

He has taken substantial legal moves, which require plenty of legwork and consideration, to change a major aspect of his biggest business interest.

As shareholders and/or simple observers of this behavior, we're left to wonder: Is this part of a calculated plan on his part or just the irrational dealings of a man with way too much stress and not enough sleep?

Is This Another Howard Hughes in the Making?

Whether you hate him, love him, or find him just plain annoying as hell, one thing cannot be denied: Musk is a brilliant visionary.

You don't get to where he is without being one. Unbeknown to most people, it was his actual concepts and designs that formed the backbone of SpaceX, his second-biggest business interest. For one guy to be able to steer the world's biggest EV producer and then dream up, build, and operate the world's biggest private commercial space company and still have time left over to drill mass transit tunnels in Los Angeles County is simply inconceivable to most of us struggling with just a single job.

And yet he pulls it off.

But when it comes to dealing with his emotions, all of this behavior proves one thing: He's still human.

And while his net worth is now approaching the $40 billion territory, the stress of potentially losing what he's built is equally profound.

Right now, there may be a stress factor at play here that's bigger than COVID-19... bigger than SEC scrutiny... bigger, even, than Elon's own expectations of Elon.

Unlike all the high-profile spats and statements, this is something that has been kept under wraps because the potential damage is simply too big to risk exposing.

Could This Be What's REALLY Bothering Elon?

What the public doesn't know is that Tesla's current lineup, and any currently planned future models, are staring into the muzzle of a loaded cannon.

That cannon goes by a name that's terrifying to any tech company: obsolescence.

The problem with current Teslas is that their motors, their very power plants, are all essentially first-generation electric motors. And by "first generation," I don't mean first generation for Tesla but first generation in history, going all the way back to Michael Faraday and his first prototypes in the early 19th century.

They're bigger, shinier, more powerful, and made of cooler materials; but at their heart, they're still the same basic design that's been running the world for well over 100 years.

This of course didn't matter one iota until just recently, when the world's second-generation electric motor came on the scene.

This motor, invented by a small Canadian tech firm, does something no electric motor that came before does: It regulates charge flowing into the motor's copper coil, using very precisely honed artificial intelligence algorithms.

This charge regulation allows the new motors to produce more power off less charge, run with less resistance, last longer, and in the case of electric generators (essentially nothing more than electric motors running in reverse), produce more power.

Unfortunately for Elon, this revolution in motor tech is heading right for his doorstep, and it's going to arrive no matter where that doorstep happens to be — California, Nevada, New Zealand, or anywhere else for that matter.

So maybe his erratic behavior isn't so mysterious. If you were staring an end to your way of life in the face, you'd be worried, too.

For investors, however, this situation could be life-changing.

The company that owns this patent is trading publicly for a market cap less than one-two thousandth of Tesla Motors'.

A year from now, however, all of this will change.

Get the full story on the company, the technology, and the market potential.