Check out our newest podcast, hosted by Jeff Siegel

The podcast is finally here...

Wealth Daily subscribers are getting the first look at brand-new podcast the Libertarian Tree Hugger.

In this weekly show - headed by Jeff Siegel - we cut the nonsense, tackle "real" issues and provide practical advice on everything from organic farming to surviving Trump's America.

What you can expect is a straight forward, no lies approach. We don't hold back. But that is your gain. We want to highlight the growing industries, political issues and wise investments that are taking place in this new America.

When it comes to policy and controversy, last week was a doozy.

Today we focus on the controversy surrounding tech billionaire Peter Thiel’s data-mining company Palantir and its new tech, which is basically an early-stage Muslim registry.

We take a moment to reflect on Jeff Sessions' self-recusal from all cases involving Russia (ouch, Republicans). And Jeff delivers a scathing critique of one of America’s central systems: education. Will we even have schools after a month of Devos?

As always, we love to hear from, so feel free to drop us a line.

You can subscribe to the Libertarian Tree Hugger on Buzzsprout.

Or you can listen on our podcast player below:

We look forward to talking to you next week. 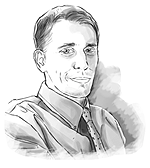 Jeff Siegel has been active in the financial publishing business since the mid-90s.

A true capitalist, Jeff has made his fortune in what's known as socially responsible investing, focusing primarily on alternative energy and transportation markets, sustainability, legal cannabis, and agriculture. He's a regular on the conference circuit, and every now and then you might find him appearing on Fox, CNBC, or Bloomberg.

From 1994 to 2001, Jeff worked for Agora Publishing, one of the largest financial newsletter publishers in the world, before packing his bags and traveling across the globe in search of mega-trends and his own version of nirvana...

He found both in the world of "green" markets.

Jeff's early analyses of alternative energy and socially responsible investing drew much criticism from the status quo. His unapologetic capitalist spirit and abrasive nature didn't earn him many accolades from colleagues, either...

But after accurately predicting dozens of trends in the ever-changing landscape of "green" market investing, many have since traded their preconceptions of socially responsible investing for profits.

Often declaring, “Capitalism is a catalyst for positive change,” Jeff continues to spot the most lucrative renewable energy, organic food, and cannabis companies in the world. And his thousands of loyal readers have made small fortunes in the process.

Each week, Jeff shares the latest in "green" market news as well as his own market updates and recommendations.

Jeff also works as a consultant, has been a featured guest on Fox, CNBC, and Bloomberg Asia, is the author of the best-selling energy book, Investing in Renewable Energy: Making Money on Green Chip Stocks, and is the co-author of Energy Investing for Dummies.