Debt Riots Break Out in Greece

Lessons from Greece and Iceland

Today is the anniversary of the Boston Tea Party.

In Greece, demonstrators staged a protest of their own. Thousands took to the streets yesterday, rallying against government cutbacks and corruption.

The protests started out as peaceful affairs; by afternoon, things had gotten nasty. 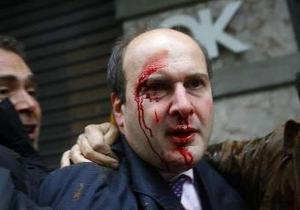 When the mob arrived at the Greek Parliament building, they spotted a well-known politician, Kostis Hatzidakis (pictured right).

His fellow Athenians proceeded to stone the former MP. That's right, they stoned him.

The politician survived, but Greece and the EU may not. Not as we know them anyway.

The riots were violent, as shown in this footage. Riot cops can be seen clashing with large groups of protesters.

Gov't troops launch volleys of tear gas at protesters, who are busy launching their own attack — a barrage of Molotov cocktails.

In another display of populist anger, English protesters attacked a Rolls Royce carrying Prince Charles and his wife last week.

Some in the crowd could be heard chanting "off with their heads".

The Royals escaped unharmed, save some damage to their Rolls Royce; rowdy protesters did manage to bust out a side window and ding up the exterior.

There are lessons for the EU and United States in this mess.

Bond holders versus the populace

Social unrest like this isn't supposed to happen in the Western world. Yet, here we are.

Confusion remains about about how we got here. This is primarily a story about bonds, and who owns them.

Who owns the bonds of at-risk EU nations?

First and foremost: European banks. The banks are so exposed to EU debt that a default by just one nation would lead to a chain of events that would likely crush them.

By securing a "rescue package" for a troubled borrower nation, banks simply ensure that they are not forced to eat losses.

Debt is transferred directly onto the public's lap, preferably. In the case of Ireland, they did so by raiding the public pension fund to the tune of $35 billion.

But these rescues are likely to fail. Once a nation is in need, its alternatives to default are limited. You can only squeeze a bad debtor so much. At some point, bad debt must be forgiven.

Default is the risk banks take when they lend money to nations in the form of bonds, and it's happened countless times throughout history.

Games like the ones being played now by the EU only delay the inevitable for a few years, and spread the pain around a bit.

Imagine if Greece had followed Iceland's example, telling creditors, "Sorry, we don't want to be saddled with unpayable debts for eternity."

I suspect we'd all be better off if they did default — and the sooner the better. Their debts are unsustainable; far too costly to maintain.

Banks would fail and need to be nationalized. Bond holders would take losses. The EU would be forced to evolve or dissolve.

Public sector jobs would take a hit. Low-productivity jobs (like many government positions) would begin flowing to sustainable industries. Smith's invisible hand would do its work, and after a few lean years, sustainable growth would return.

Take the case of Iceland. One of the first victims of the financial crisis is already recovering...

By turning down the big banks offer, the country has set itself up for growth. It's population, unlike much of Europe, won't be saddled with the massive debt spawned bailing out zombie banks.

Meanwhile, banks remain firmly in control in Europe and the United States...

Unfortunately, I see riots in Europe as a sign of things to come.

The U.S. should expect similar unrest within three years. States are broke, pensions are horribly underfunded, and a Medicare disaster looms on the horizon.

Something has to give.

And when it does, social programs will be slashed along with everything else. Unemployment, welfare, food stamps — all these things will face cuts. Do you want to be in Detroit when that happens? Or any major urban center, for that matter? Nothing against Detroit, of course. It's my dad's hometown. Unfortunately, it's the hardest hit city in America, and would be vulnerable to social unrest.

My goal isn't to frighten anybody; it's to underscore the importance of these issues.

Because so far, nothing fundamental has changed (oh, the irony of that word change), nor has anything been fixed. TBTF banks are more fail-proof than ever, lining their pockets at 2007 bubble levels.

The power-elite financiers remain in control: the same group of Bob Rubin devotees who set the stage for the meltdowns of 2000 and 2007 — Tim Geithner, JPM & Goldman, and of course the Bernank, among others.

Paul Volcker has gained a little more respect in the Obama administration, which is a positive development. Even the Fed has a few rational folks, like Hoenig and Fisher. But they're outnumbered 20-1 by banksters, of course.

Not to be overly dramatic, but we stand at a historic crossroads. If we choose the right path, America and the world could be on a path to sustainable growth in as little as two to three years.

If we choose the wrong one — the road we're currently on, by the way — we're looking at least a decade of poor growth, likely negative growth in real terms (after inflation).

As asset prices rise due to Fed printing, living costs will increase. Wages will not keep up — they never do. Corporate margins will be squeezed and compressed. Not a pretty outcome.

The answer lies in drastic gov't spending cuts, starting with military. But the wheels of progress turn slowly in DC, and they usually turn in the wrong direction.

The only consolation prize from this scenario, as I see it, is the bull market in precious metals. Metals should continue to gain until pressure finally forces the Fed to change course, which I suspect is still a ways off.

And that's why we've been advising readers to own gold and silver for the last five years.

Play the hand you're dealt, not the one you wish you were.