Why Now is a Great Time to Be a Debtor

I bought a new car the other day.

As I was signing papers in the blue fabric cubicle adorned with sales victories and determination posters, I got into an economic discussion with the sales manager...

“Inflation is coming,” he said with the certainty of Edward Stark's premonition about winter.

I had already decided to take the 1.9% interest loan on the car and, furthermore, to run it out for six years.

Conventional wisdom says that you should pay cash for a car. It couldn't be more wrong.

Now, don't misunderstand me; I could pay cash. It would only be a matter of selling a few gold coins.

But gold is going up, and inflation will be here soon enough.

This means borrowed money will soon be cheaper than cash-money, if it isn't already.

And as we all know, the price of gasoline is at $3.82 on a national level for regular. Food prices have also been moving up as the price of corn doubled.

Food inflation will shoot up in the winter and spring. Farmers have culled their herds because they can't afford to feed them. This will lead to inexpensive meat now and higher prices later.

In a world where debt devalues, it is good to be in debt.

Inflation Trending Up Off the Bottom 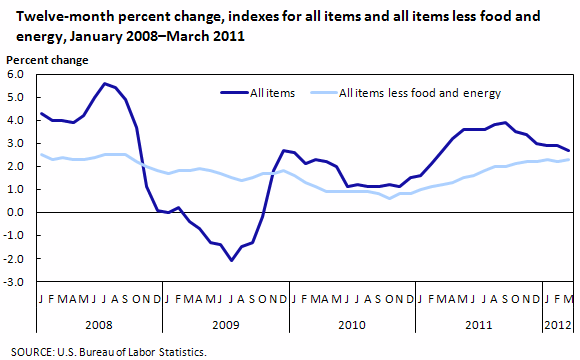 The dominate narrative of the past four years in the market was deflation now, inflation later.

Recent action by the Fed would suggest the future is closer than we think.

For those of you who missed it, the Fed has announced it will print forever — or until unemployment falls significantly.

... purchasing additional agency mortgage-backed securities at a pace of $40 billion per month...

If the outlook for the labor market does not improve substantially, the Committee will continue its purchases of agency mortgage-backed securities, undertake additional asset purchases, and employ its other policy tools as appropriate until such improvement is achieved in a context of price stability.

Ben Bernanke believes he can force growth not though wealth creation, but through money creation.

More money chasing the same number of goods means those goods will go up in price versus the declining dollars.

Inflation is always a monetary problem, etc, etc. You know the drill.

He has told you he will keep interest rates near zero until at least mid-2015.

The smart money is now on the borrowing side.

Logic dictates you take on as much debt as you possibly can at today's low interest rates and for as long a term as they will lend it to you. You take this money and buy gold, oil, and houses.

The U.S. dollar is down more than 3% this month, which is a huge move in currency terms.

That said, there is a fat doji candlestick at the bottom of this trend, and the chart is saying we will get a dead cat bounce. But it won't last...

The long-term trend in the dollar, the euro, the RMB, and most major currencies is down as countries try to lighten their debt load in a race to the bottom.

The only question you should have is whether you should buy physical gold or gold miners.

In my trading service, Crisis and Opportunity, I have been buying up gold miners. My play on the gold mining Bull 3x ETF: NUGT is up more than 70% in a month.

Gold miners are a buy right now for two reasons.

The miners just got crushed over the past two years amid a massive shakeout.

Those of you us who buy the “diamonds in the rough” will find fantastic opportunities in the gold mining sector. I've already recommended two such stocks to readers of Crisis and Opportunity and will put out a third this week.

The second reason I prefer the miners to the physical is that miners have finally got rid of their hedges... 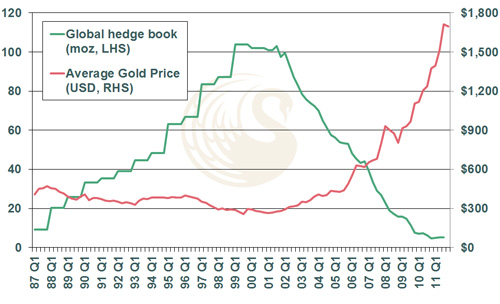 For years, gold miners would lose money as gold went up because they had sold their future production at a past price.

This takes away the reason to own a gold miner. You own mining stocks because costs are mostly fixed and the price of gold is rising. This gives you a leveraged play on high gold prices.

Now that hedging is down to almost nil, you can put this play on with more confidence.

Again, the trade of the decade will be to acquire debt and buy gold miners.