This is my first digital currency blog in a long time…

Things have been moving fast here at Wealth Daily. I along with Jason Stutman, our senior technology analyst, just launched a free digital currency training service. That has kept us busy as we educate a whole new group of crypto investors.

That being said, something happened the crypto space that filled me with righteous blogging fury.

That event was the botched Coinbase Bitcoin Cash launch. You can see an accurate depiction of the event below:

That's right, it was an explosion.

In this article, I want to talk about some of the things that went wrong.

I also want to be upfront about a few things. I do love Coinbase. In my opinion, the company has done a great job scaling its platform to meet user need, especially considering the MASSIVE influx of digital currency investors this year.

That being said, I along with many other investors and crypto enthusiasts feel like the launch of Bitcoin Cash was majorly flawed on multiple levels.

And people should be aware of it…

Let's start with the "missing" email that was supposed to inform investors if Coinbase changed its plans on Bitcoin Cash trading.

For some history, remember that initially, Coinbase didn't even want to acknowledge Bitcoin Cash on its exchange.

Yet, after the announcement of SegWit2x, the public demand was so strong (wouldn't you want free money?) that the exchange reversed its stance.

In a statement on its website, Coinbase stated it did intend to support Bitcoin Cash withdrawals.

The key word there is “withdrawals,” not “buys.” If Coinbase changed its stance, it said it would be notifying customers via email.

In that screenshot, it clearly says "withdrawals."

But if you go to Coinbase, the Bitcoin Cash token can be both purchased and sold.

And all of this begs the question: Where was the update email?

Why didn't Coinbase disclose to users that it would be allowing buying on the platform?

This is critical information for most investors, considering that being able to buy on Coinbase could influence the price of Bitcoin Cash.

And if this lack of disclosure wasn't bad enough, Coinbase decided to one-up itself.

Now, everyone is accusing it of insider trading…

This really is the question that everyone is buzzing about.

Right before Bitcoin Cash was added to Coinbase, demand for the digital currency spiked.

It began ticking upward on the 18th of December, with a sharp spike right before the token actually hit Coinbase.

Then Bitcoin Cash shot through the roof. It was trading for upward of $8,000 on GDAX. Then there was a massive sell-off, dropping the price by over a third.

Worse yet, Coinbase halted trading, preventing investors from selling or buying Bitcoin Cash in the wake of the crash. 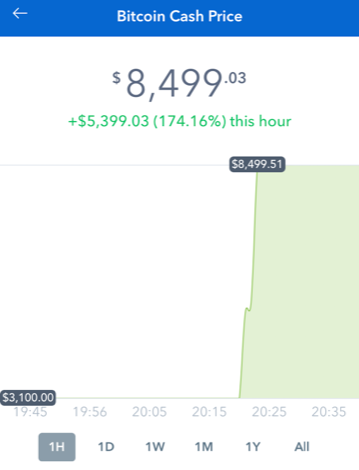 This introduces a lot of questions, including whether or not people were tipped off that the 19th would be the day Bitcoin Cash would be hitting Coinbase. (It was public knowledge that it would be happening sometime before January 1st).

The second the drop happened, cryptocurrency traders took to Twitter and Facebook to moan about insider trading.

Coinbase has announced that it will be conducting a formal investigation into the matter.

This isn’t good news for Bitcoin Cash or Coinbase because it undermines the validity of the exchange to consumers.

So Where Do We Go From Here?

To some people, the answer to that question is Gemini — another exchange that allows individuals to connect USD payment methods.

We’re still in the early stages of the digital currency market, so being damned in the court of public opinion could be damaging for any exchange.

Beyond that, users are angry. They’re angry that information about being able to buy Bitcoin Cash was withheld.

And they’re angry that, almost immediately after the sharp drop, trading on Coinbase was halted, leaving many investors in the lurch.

In recent interviews, Coinbase didn’t dispute that it could be heading toward an IPO. All I can say is, with this many grumbling customers, Coinbase better watch its step…

Now, What About Bitcoin Cash?

To be honest with you, I don't have a lot of things to say about this digital currency.

The token stems from the Bitcoin blockchain and is relatively new with nearly no market history.

Over the last year, multiple issues have been highlighted in the Bitcoin network, causing a rise in interest in altcoins that could potentially solve the problems.

This may be one of the reasons that Bitcoin Cash has been experiencing such a meteoric rise.

In the wake of the SegWit2x cancellation, Bitcoin Cash became a favorite of those who were dissatisfied with Bitcoin.

That being said, there are still issues that need to be addressed about the token, including security.

In the coming months, Wealth Daily will be monitoring these developments and deciding whether or not Bitcoin Cash could become a serious rival of Bitcoin’s.

Right now, there’s simply not enough history behind the coin to make any decisions.