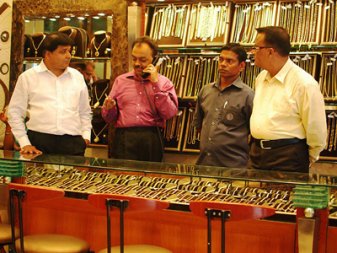 A strike by jewelers in India came to an end this past weekend after 19 days. It began at the beginning of March, as the government has imposed a one percent excise tax on gold jewelry.

The one percent excise duty was reinstituted after it had previously been rolled back in 2012. Jewelers also went on strike 4 years ago to protest the tax, but it seems government is relentless in trying to get its hands on any money it can.

The bad thing here is that the strike has ended without the Indian politicians backtracking on the excise tax.

Instead of rolling back the tax, the government is forming a committee to address the concerns of jewelers. In other words, nothing is going to get done about it.

Government operates the same in any country, whether it is the United States or India. When the government forms a committee, it is designed to deprive the people of their liberty and give window dressing to their own ugly policies.

What concerns can this committee possibly alleviate without actually getting rid of the excise tax?

The best part of this whole story is that the Indian government is assuring the jewelers that they will not be harassed by the excise department in its collecting of the tax. What else can you call it but harassment?

If there is an excise department put in charge of enforcing the laws regarding excise taxes, then what could its possible function be other than to harass those responsible for collecting and paying the tax?

If the Indian government were serious that jewelers won’t be harassed, then the new law would be meaningless. This would mean the jewelers could just ignore the new excise tax and not collect it.

Unfortunately, that is not what the Indian government means. What they mean is that the jewelers won’t be harassed as long as they follow the dictates of the politicians, which includes paying this additional tax.

In other words, the government – at least as of right now – is not backing down on this reintroduced tax. If meaningless guarantees and rigged committees are supposed to be some kind of concession, then I hope the jewelers, along with the consumers, realize just how much they are being taken.

The Indian people have a great appreciation for gold. It is a large part of their culture and history. But it has also become a way for regular people to protect themselves against an overbearing government.

We can and should complain about the Federal Reserve and inflation in the United States. But the U.S. dollar is a bastion of stability when compared to the Indian rupee.

India, with about 1.25 billion people, is still a third-world country. Even though it has some basis of common law from being under British rule, it is not a society that has a high degree of respect for property rights. It is a massive welfare state with a massive bureaucracy. It actually makes the U.S. government look business friendly in comparison, which is saying something.

Just in recent times, the Indian government has imposed a 10 percent import tax on gold in an attempt to supposedly reduce its trade deficit. The politicians think it is a bad idea that Indians want to import gold. They would rather them hold on to their depreciating rupees.

At some point, the people in India need to wake up and realize that their government is not doing them any favors. It is making them poorer. They consent to this massively corrupt system that does not respect property rights and does not reward hard work and ingenuity.

It is rather ironic given that there are many great entrepreneurs who end up in the United States from India. And most of the people I know from India are extremely hard working. Perhaps it is a case of brain drain, where the best and the brightest find a way out of the corrupt system of India.

I am still optimistic for the future, even in India. As technology continues to get better, more people will be exposed to alternative views that do not consist of trusting the government and depending on politicians for their livelihood. You would think that the hundreds of millions of poor people across India would realize that the anti-capitalist system there has not exactly worked out well for them up to this point.

The U.S. is a welfare state and bureaucracy too, but to a much lesser degree. It can’t be avoided anywhere. But there is still a culture of entrepreneurship and rewarding hard work in the United States. Despite some of the class warfare we hear, most Americans still believe in the rags to riches story. A show such as Shark Tank probably wouldn’t go too far in many other places of the world.

For India, there is so much potential. I hope that the people there will begin to realize that they don’t have to be ruled over by a small group of people who don’t have their best interest at heart. They do not have to consent to big government.

At least there are some signs of resistance. And as long as the Indian people still desire physical gold, that is at least one symbol of distrust in the government.