Editor's Note: Rare Earth Metals (REEs) are nothing short of crucial to the way we live. In fact without them, some of our most important modern technologies could never exist: rechargeable batteries, electric motors, photo optics, and solar cells, just to name a few.

They are so pivotal to modern circuitry that industry insiders came up with a nickname for REEs: 'technology metals.' And on January 1st, Denmark will relinquish its sovereign hold over Greenland's mineral rights, making Greenland's $273 billion rare earth resources private property. To learn about the single company in control of all of it, read the following new report.

When the news broke in Tokyo, it was said that the "Head Freds" at Toyota and Honda literally fell out of their chairs in shock.

According to a UK Times report from March 2009, "[It] has triggered what government sources in Tokyo told The Times was an invisible tsunami of panic in Japanese industry."

According a piece from The Straits Times published on November 23, "Japanese government officials are scrambling around the world while companies are nearly on their knees begging foreign governments to sign partnerships."

What had the Japanese in such a state of panic?

Its old foe — China — had just served some revenge.

In a stunning turnaround, the Chinese Communist Party announced further export restrictions of a vital group of commodities. Without access to these commodities, the Japanese automobile industry would come to a screeching halt.

Toyota's hottest selling car — and quite frankly, its future — is the hybrid Prius.

Inside the Prius are roughly 40 to 60 pounds of a unique commodity group known as rare earth metals.

But we're calling them "Dragon Metals" (DM) because the Chinese account for 97% of global production. They literally own the market. 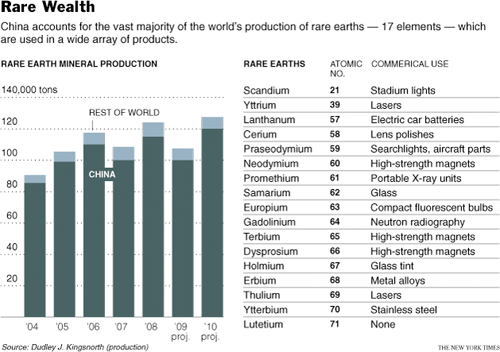 In fact, Deng Xiaoping said that these metals "will be for China what oil was for Saudi Arabia."

Japan's tech economy depends on these metals. They have identified 31 Dragon Metals, including lithium, that are vital to the future of the tech economy.

Dragon Metals are a group of elements in the periodic table: namely scandium, yttrium, and the fifteen lanthanoids. The use of Dragon Metals in modern technology has spiked significantly over the past years.

For example, dysprosium has gained significant importance for its use in the construction of hybrid car motors. Terbium and dysprosium are also used in small amounts.

Since Toyota plans to double the Prius's fuel economy, each car will require MORE rare earth metals than it does now. And Toyota plans on selling 1 million Priuses yearly by 2012. . . and 2 million to 3 million by 2014.

Other hybrid/electric cars made by other manufacturers use rare earths in differing amounts — vehicles including the popular Ford Escape Hybrid and Honda Insight.

It all adds up to tremendous demand. And unfortunately, this new demand has squeezed supply. . . and there is mounting concern that the world may soon face a shortage of the materials.

No wonder the Chinese are trying to corner the market!

This is where the investment opportunity unfolds. . .

Dragon Metals are essential to new technologies such as iPhones and flat screen televisions; green energy technology such as wind, solar, and geothermal; and critical to the future of hybrid and electric cars.

Recently, China has been limiting exports of DMs, which could lead to declining worldwide supply and skyrocketing prices. This has Western governments worried, as DMs are also key to high-tech military applications.

An article from The Telegraph reports on plans in China to restrict exports of rare earths:

Beijing is drawing up plans to prohibit or restrict exports of rare earth metals that are produced only in China and play a vital role in cutting edge technology, from hybrid cars and catalytic converters, to superconductors, and precision-guided weapons. A draft report by China's Ministry of Industry and Information Technology has called for a total ban on foreign shipments of terbium, dysprosium, yttrium, thulium, and lutetium. Other metals such as neodymium, europium, cerium, and lanthanum will be restricted to a combined export quota of 35,000 tonnes a year, far below global needs.

This explains why the Japanese are panicking. . .

The Toyota Prius uses 2.2 lbs. of neodymium in the hybrid's electric motor and 22-33 lbs. of lanthanum in the car's battery pack.

Without these Dragon Metals, the Prius would cease to exist. And the thriving hybrid industry in Japan would come to a screeching halt — bringing Toyota and Honda to their knees.

But with every crisis comes an opportunity.

And as an investor, this is where you can make a legendary fortune.

In fact, on August 26, I told you how to play the lithium market by buying Western Lithium for $1 a share. Today, Western Lithium trades for $1.25. . . and has gotten as high as $1.50 since I first told you about this opportunity.

But there are other ways to play the rare earth market.

And I've pinpointed two ways to play this situation:

1) To invest directly into China's electric car market; and
2) To invest in Dragon Metal exploration outside of China.

You see, I can almost guarantee the world isn't going to sit by and become dependent on a vital resource like it did with oil and OPEC.

As you read this, mining companies are scouring the earth, looking for new supplies of Dragon Metals.

And one of the most promising places is Greenland.

In fact, recent estimates show that Greenland could supply 25% of global demand of Dragon Metals.

In the weeks ahead, we will show you specific ways to invest in this opportunity.

In addition to that, we will also bring you a unique way to play the Chinese Dragon metals market as it relates to electric cars.

P.S. Dragon Metals and other commodities vital to the electric car market should be on every investor's radar — the companies that supply these commodities to auto giants like Toyota and Honda could mean some serious gains for investors. Not to mention, as current skyrocketing energy prices are proving — we're in the early stages of the greatest commodities bull market in history. . .

My colleague, Ian Cooper, has closed 93 winning trades with his resource and energy stock picks this year alone! Since November 2007, readers of his Pure Asset Trader service have enjoyed gains of 3,124%. Click here to read more about how you, too, could start enjoying this kind of profit-taking.