China to Increase Demand for Gold 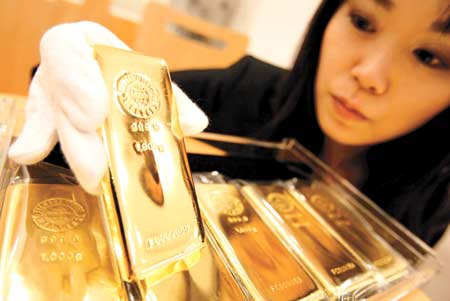 China has plans to establish a new gold fund worth up to 100 billion yuan, which is approximately $16 billion. It is said to be part of China’s Silk Road initiative.

The new investment fund will focus on investing in gold mining projects, and also includes plans for a gold-backed exchange traded fund.

The president of China has stated that he hopes annual trade will surpass $2.5 trillion in the next decade along the new “Silk Road” initiative, which proposes to develop infrastructure across Asia.

While Chinese officials keep loading up on more U.S. government debt, they have also taken a greater interest in gold in recent years. This new gold fund appears to be a major project with its sole focus being gold investment.

Chinese demand for gold has likely helped keep the price up in recent years. While the price has been hovering around $1,200 per ounce for quite a while, it is important to remember that this is the dollar price of gold holding steady in the face of a remarkably strong U.S. dollar compared to the other major currencies.

This new gold initiative will only serve to increase demand for gold, if anything. It is welcome news for gold investors because there isn’t really much of a downside to this project in terms of gold pricing. If it has any effect, it should drive prices higher, or at least higher than they would have been.

If the new gold initiative raises the $16 billion investment as expected, it is unclear how this will be allocated, but most of it will be going into gold buying, gold mining exploration, or some form of gold investment.

A Better Misallocation of Resources

While China has come a long way economically over the last few decades, unfortunately some of the “growth” that we currently see is nothing more that false prosperity.

There is no question that, as a whole, the Chinese people are richer now than ever before. They will also be richer 10 years in the future, barring some really disastrous government policies.

With that said, China is currently one gigantic bubble that is waiting to pop. The central planners have misallocated resources on a grand scale.

Almost every business in China is either owned by the government or subject to heavy control by the government. While this new Chinese gold fund is a combination of private investment and government investment, we can’t fool ourselves into thinking that this is a pure market play.

You can still be a big advocate of gold and gold investment and still realize that this shouldn’t be done or dictated by the state. While this gold investment seems to be wise, it is still a misallocation of resources because it isn’t taking place in a truly free market.

In a true free market, people and businesses would own and control their own wealth and make the decisions on where to invest. If you have state-owned and state-controlled businesses investing money, it is not a true reflection of free market investment.

China has a huge stock market bubble. It has a huge real estate bubble with giant empty cities. Chinese officials have directed money towards infrastructure that is not needed at this time. Its Silk Road initiative is more malinvestment.

To be sure, this doesn’t mean it's money and resources that are completely wasted. There is something to show for it, even if it was not the optimal investment. I would prefer the U.S. government build new highways in the middle of nowhere than to send money to foreign dictators, for example.

The Chinese government is still made up of mercantilists who think they can centrally plan a giant economy. This is going to blow up in their faces when the massive economic bubble pops.

But these central planners have taken a major interest in gold investment. It seems a bit contradictory, but even central planners need a hedge like gold as a form of insurance against disaster.