The sentence below might become the most bullish words you’ll hear for the next five years...

If you’ve never heard it, that’s because it’s the phonetic translation of a defiant Chinese boat captain.

But trust me, it’s quickly becoming the rallying cry for all of China — similar to America’s “Remember the Alamo,” or “Never forget 9/11.”

The phrase translates to The islands belong to China.

And the islands referred to are the Diaoyutai Islands in the East China Sea. 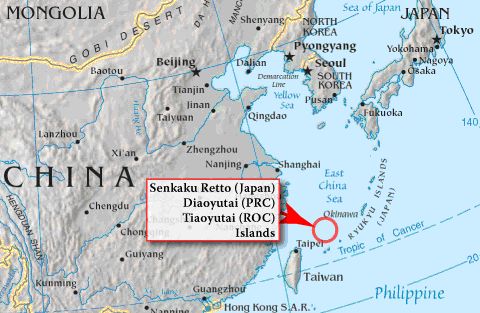 The islands themselves are of little significance. The Diaoyutai, for instance, are only 2.6 square miles in size.

But just five weeks ago, this tiny island chain became the focus of a superpower dispute between China and Japan — ancient rivals that have laid claim to the land and to the oil and natural gas reserves that lay below the sea floor.

Here is the approximate sequence of events...

On September 7th, a Chinese fishing vessel collided with a Japanese Coast Guard ship in the waters off the disputed island chain.

In a provocative move, Japan arrested the Chinese boat captain, as well as 14 other Chinese who were on the boat.

This set off a chain reaction of diplomatic gunshots.

China called the skipper's arrest invalid and illegal, arguing that the islands have been part of China since ancient times. They demanded the immediate release of the captain.

In response, a group of Japanese ruling party lawmakers said the Japanese government should consider stationing troops on the islands.

China was holding all the cards — four aces.

You see, when Japan didn’t comply with the request, China responded with a devastating economic decision...

On September 22nd, the Chinese halted exports to Japan of a vital metals group that the Japanese economy literally cannot live without.

The metals are called rare earth elements, and they’ve become some of the most sought-after metals by governments and corporations alike.

Worse yet, China accounts for over 95% of the global rare earth production. This means that if you want rare earths, you have to go to China.

According to the New York Times, "The Mideast had oil, but China has Rare Earth Elements. As OPEC did with oil...China is about to tighten its hammerlock on the market for some of the world's most valuable metals."

Metals such as cerium, promethium, europium, and many of the remaining 17 rare earth elements are essential to all modern electronic devices that use:

Each Prius uses 2.2 pounds of neodymium in its electric motor magnets, and 20-30 pounds of lanthanum in the batteries. (And those amounts will only go up as the Prius's powertrain continues to evolve for more efficiency.)

The rare earth export ban scared the crap out of the Japanese, and they immediately released the Chinese boat captain.

But the Japanese weren’t the only ones scared. On the same day the Chinese banned rare earth exports to Japan, the U.S. House of Representatives quickly passed H.R. 6160.

It’s called the Rare Earths and Critical Materials Revitalization Act of 2010, and according to the bill:

There is established in the Department a program of research, development, demonstration, and commercial application to assure the long-term, secure, and sustainable supply of rare earth materials sufficient to satisfy the national security, economic well-being, and industrial production needs of the United States.

Of course the Senate didn’t want to be left out on such an important national issue.

They introduced their own bill, the Rare Earths Supply Technology and Resources Transformation Act of 2010.

According to Mining News, “Lanthanum [one of the 17 rare earth metals] is a vital catalyst in oil refineries. Oil refineries produce jet fuel, and China almost has a monopoly on this rare earth metal. This means China can close down the whole U.S. Air Force and Navy within months, for example.”

But there is a bright spot to all of this...

As the world looks to sources for its rare earth supply outside of China, this crisis has set off a bull market in rare earth mining stocks. 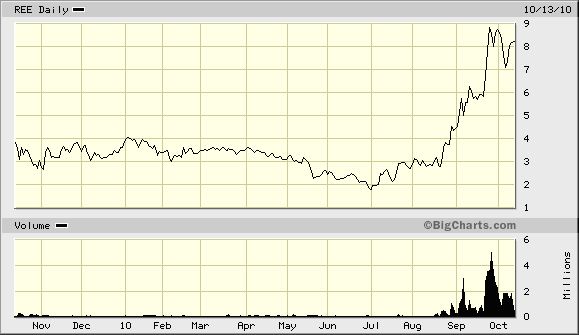 Even though rare earth stocks have popped significantly since the China-Japan dispute, this bull market is just getting started.

And in the coming days, Ian Cooper will be releasing his exclusive rare earth trade.

It’s an 80-cent stock that could become one of the biggest rare earth suppliers in the world.