70 Million Ounces of Gold Down Under

Gold has not always been revered as a "precious" metal. In fact, there have been times that many have perceived it as a dangerous commodity.

When James McBrien woke up on February 15, 1823, he didn't know that he was about to write a major chapter in this story.

McBrien, an Assistant Surveyor with the Department of Land, had a relatively humdrum assignment on this day: conduct a survey of a road along the Fish River between the small towns of Rydal and Bathurst in New South Wales, Australia.

While studying the road, McBrien saw a curious yellow glitter in the river. He immediately knew what it was: gold.

McBrien recorded in his field book the following note: “At E. (end of survey line) 1 chain 50 links to river and marked gum tree. At this point I found numerous particles of gold convenient to river.”

But while he was certainly pleased, early gold discoveries in Australia were kept quiet by the authorities.

Those who found gold kept the knowledge to themselves. And for good reason. . .

Many feared a gold rush would plunge the largely convict population into chaos and lawlessness. Farmers also wanted to protect their sheepruns and cattle lands from any undesirables coming in search of gold.

Others simply didn’t want to share the potential wealth.

Unfortunately for these folks, the discovery of gold can only be kept under wraps for so long.

On a piece of the Empire newspaper, Hargraves wrote, “Gold discovered at Lewis Ponds Creek county of Dathus New South Wales on the 12th day of February, 1851.” The original memo can be seen below:

As a result, Hargraves is credited with starting the nineteenth-century Australian gold rush, which helped shape the country as one of the world's leading gold producers.

Australia is currently the fourth-largest gold producer in the world. But its role as a leader is slipping. . .

Annual gold production has steadily fallen over the past few years, as well. Last year, Australian gold production was 9.4% lower than in 2006, and 13.5% lower compared to 2005: 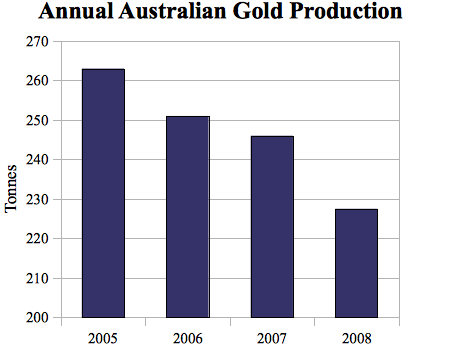 Despite the drop in production over the past few years, however, the value of the gold produced was higher, due to increasing prices during the bull market.

Even though the value of Australia's gold production has increased, the country still needs to halt the decline in output.

So in response to the need for production expansion, the Victoria state government sponsored a three-year $9 million government study. . .

The results were recently made public.

The new study revealed huge unexploited deposits across south-east Australia, with some ore-bearing rocks located just 100 meters below the surface.

State geologists used new survey techniques to create a three-dimensional model of the land, complete with geochemical and geophysical data.

Over 70 million ounces could be extracted with modern mining techniques northwest of Melbourne.

At today's prices, these 70 million ounces of gold would be worth $67 billion.

In addition to this resource, geologists have identified other areas which may hold even more gold.

The two survey areas identified as having a high potential for gold deposits are the Melbourne Zone (north-west from Melbourne to Shepparton), and the Gold Undercover Zone, located near Swan Hill to around Horsham.

The only major gold producer in South Australia is BHP Billiton's Olympic Dam Mine which, apart from producing copper and uranium, produces gold as a byproduct.

The new study will help the mining industry examine the risks and focus efforts on regions more likely to yield returns.

With a +70-million-ounce gold potential, there will certainly be many interested parties. For investors, there are a handful of small companies with land holdings in the area. These companies are likely to show serious gains as they expand to fill a new and aggressive market.

We'll keep you updated on our findings in upcoming issues of Gold World.