3 Charts You Must See Now

Back in 2004, I refinanced my house to take advantage of lower mortgage rates. It just so happened that there was a mortgage broker in my neighborhood, as well as a real estate appraiser.

My wife at the time wanted to update our kitchen and the basement and add all the gewgaws and widgets that seem to make females happy.

We went to the mortgage broker and refinanced and took out some equity. He went to the real estate appraiser and said, "I need XX amount to make this deal happen... and Fred, if you want more work from me — this deal is going to happen."

Some people might say that it is a conflict of interest for Fred to be appraising housing prices in his own neighborhood, or for our mortgage broker to give him work based on that appraisal. But that's how the world works and it is part of the reason why the housing prices climbed beyond all rationality.

There are also rating agencies that produce judgments on sovereign and corporate debt. The top three are Moody's, S&P, and Fitch. Personally, I think they all suck. Here's why...

I've been in this business for 15 years and lived through five major international meltdowns, and these debt ratings agencies have never given prior warning. They are, in fact, less than worthless because a "AAA" rating absolves fund managers of the responsibility of doing the right thing.

Anyone with even a passing interest in Wall Street knows this.

But what these agencies are good at is closing the barn door after the horse gets out and the roof has fallen in.

This week, in order to save their reputation and fend off some lawsuits, Moody's downgraded Greece's debt rating from AAA to BBB+. Last week, if you remember, I told you that Greece was headed for trouble.

It's one thing to pick on a small country like Greece... but it's quite another to start blowing up your own neighborhood. You may not like to hear it, but the U.S. deficit — and its debt as a percentage of GDP — are similar to that of Greece.

According to Moody's Investors Service:

... In the worst-case scenario the U.S. could lose its triple-A rating in 2013 if the countries growth slows, interest rates climb, and if the government fails to address the national deficit that has substantially grown due to the assistance provided to the financial sector.

The next year or two will show whether growth potential has been structurally eroded or whether a robust yet sustainable recovery is possible," said Pierre Cailleteau, chief international economist at Moody's.

Way to stick your neck out, Pierre. If I was 6' 5" and had a laser-rocket arm, I'd be Peyton Manning.

I'm sure the report will inspire a number of tea-baggers to send strong letters to Obama (who, as I write this, is announcing plans to spend our way out of the debt crisis).

According to Brietbart: "President Barack Obama outlined new multibillion-dollar stimulus and jobs proposals Tuesday, saying the nation must continue to 'spend our way out of this recession' until more Americans are back at work. Without giving a price tag, Obama proposed a package of new spending for highway, bridge and other infrastructure projects, deeper tax breaks for small businesses and tax incentives to encourage people to make their homes more energy efficient."

The U.S. debt clock has surpassed $12 trillion and the annual deficit has ballooned past $1.5 trillion. I've read some numbers that say if you take into account the total amount of personal debt and unfunded liabilities such as Social Security, the U.S. is leveraged to more than 350% to GDP.

But let's push those skeletons back into a closet for another day and just look at the numbers published by the government in July.

Here is the chart for U.S. debt as a percent of GDP: 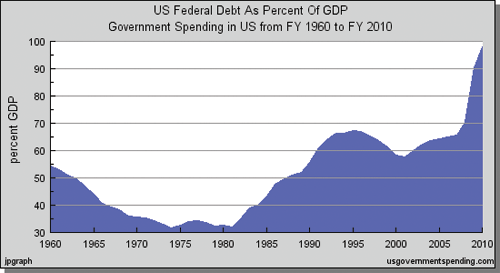 The U.S. is in the enviable position of being the world's reserve currency. And the currency of choice for safety. Which means that when countries like Greece that blow up all of the money heads for the short-term U.S. debt, this keeps our interest low and our debt payments manageable.

This is nothing more than tradition these days. It works because it has worked. There is no fundamental reason to seek out an asset that has lost 30% of its value in the past year and call it "safe."

There will come a day when the dollar will no longer be seen as a safe haven. To me, that day is today.

But enough on that...

Here's the chart you should see:

The unmovable object of the three-year downtrend has run into the unstoppable force of this year's suckers rally. Technical analysis guys would say that the longer trend is the most dominant.

The secondary indicators — such as the MACD crossover — suggest that we are heading down in the short term.

The dividend yield would tell value investors that we are back below 2%, or where we were at the 2007 peak. That is not a bottom.

And take a look at this third chart: 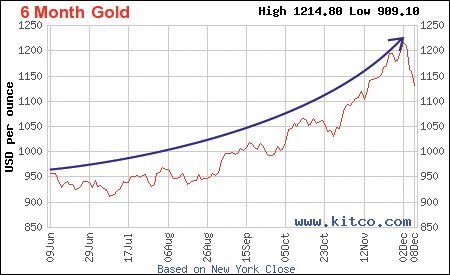 Gold is riding a six-month uptrend after going sideways for almost two years below $1000 per ounce.

It has recently sold off because the unemployment number in the U.S. came out at a beneficial 10% — down from 10.2%.

If you can get in anywhere around $1,100 an ounce, it looks like a good deal. Remember that the Indian Government bought 200 metric tons at $1,058 from the IMF on November 3rd. That's your floor.

If you haven't bought gold yet, buy some on this dip.

And if you're looking to increase your returns, my colleague Greg McCoach recently uncovered yet another way to come out ahead during this crisis. It's a very unique sort of investment, backed by gold. And get this: it makes twice the returns of owning physical gold.