Greenspan Admits we're in a Recession

Welcome to Wealth Daily's new weekend review. Each week we'll take a look at the week that was and what's ahead, along with what you may have missed from our free sister sites, Gold World, Energy and Capital, and our free blogs. Enjoy.

"The US had not yet entered the recessionary state which would be marked by sharp falls in orders, strong rises in unemployment and intensive weakening of the economy."

Even the International Monetary Fund said the "US economy is likely in a ‘modest recession' and will stagnate through much of 2009 as housing prices slide further and credit conditions remain difficult."

Even the Oracle of Omaha thinks we're in a recession. The CEO of Caterpillar thinks we may be in one. George Soros believes this is the "worst market crisis in 60 years."

JP Morgan chairman and CEO Jamie Dimon thinks America's in a recession... as do 71% of the 51 respondents in a Wall Street Journal poll. Poll respondents also felt there was a 48% chance "that the 2008 downturn could be worse than what was felt in the early 1990s and in 2001."

Even Well Fargo CEO John Stumpf says, "It is now clear that the U.S. and global financial markets are experiencing their worst financial crisis since the Great Depression."

Funny... Steve Christ and I have been saying we're in a recession well before any of them. Oh well... It's just nice that other "professionals" are beginning to catch up.

Yep, in an interview with CNBC, in which he defended his Fed leadership skills, Greenspan finally admitted it and lashed out at his critics. Though, it's hard not to blame a Greenspan Fed that praised derivatives growth as a boon for market stability, while ignoring calls for mortgage market regulation.

Consumers are beginning to shrink

The auto industry is contracting. Production is easing, said the former Fed boss, adding "The U.S. economy will not stabilize until housing markets recover... To speed that process, the Bush Administration should look to the 1980s savings and loan crisis for lessons on settling the crisis by committing taxpayer money to the project."

Plus, you can plainly see that housing weakness has spilled into labor market growth and consumption.

But he stopped short of declaring a recession, "because there's a definition for the ‘R' word, and we haven't reached the definition."

How do you profit from it?

Referring back to our January 25, 2008 "Sin Stocks" argument, think about this.

Tough economic times won't stop gamblers from gambling, drinkers (social and otherwise) from drinking, or smokers from smoking. It's not going to happen. In fact, tough economics may give them more reason to indulge in smokes, drinks, and gambling - the catalysts for "sin" stocks.

Immediately following the 9/11 attacks, for example, the tobacco sector was an out-performer. A similar trend could be seen during the 1991 Persian Gulf War, too, proving that people will buy cigarettes and alcohol regardless of economic and political tensions.

Some Sin Stocks to Consider

We're anticipating similar trends in our current economic downturn , and expect upside in the "sin" plays, such as:

Get used to it, folks. Despite those that believe a recession just began, we've been in a recession for months. Protect yourself and you'll be fine.

George Soros: "I consider this the biggest financial crisis of my lifetime. A ‘superbubble' that has been swelling for a quarter of a century is finally bursting."

Worse, and I'll refer to him as the "Pontificator of Doom," this isn't the first time he's predicted market doom. Just 10 years ago, he published a book predicting global economic collapse.

Even worse, "Mr. Soros, a fierce critic of the Bush administration, faults regulators for allowing the buildup of the housing and mortgage bubbles. He envisions a time, not so distant, when the dollar is no longer the world's main currency and people will have a harder time borrowing money."

That brings us to our next point... where to put your money when the dollar goes kaput.

On the very real possibility of $1,000 to $1,200 gold by year end, SC Trading Pit is doing its due diligence with this stock. Stay tuned. It's a buy on further gold pullbacks. 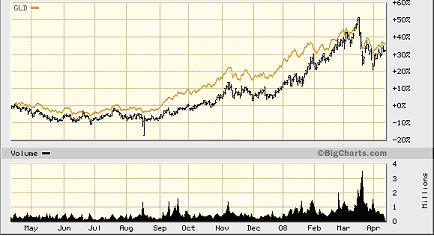 P.S. After watching post-IPO MasterCard run from $43 to more than $200, we knew the Visa IPO was too good to pass up.

In a market virtually frozen by credit and bank woes, and tumultuous economic uncertainty, here was a company that would soon put an end to pent-up salivating investor demand for any company not suffering from credit issues.

But unless you had friends on the inside, there was no way to buy pre-IPO, which means that most investors missed the opening day run from $55 to $69.

Investors that followed the recommendation are up more than 13% in only 22 trading days. And the run has just begun.

But gains like this are nothing new for SC Trading Pit. Despite extreme market volatility, and wild price swings, the team recommended buying and selling shares of "blood in the streets" favorite, MF Global, for 64% gains in 11 days, and 55% gains in a single day.

In only nine days of trading, he's up 11% on a favored Taiwan stock... And the Taiwanese stock run, the SC Trading Pit team tells me, is just beginning.

For the week of April 7, 2008, here's what we covered in Wealth Daily and elsewhere.

Skyrocketing Food Prices and the Commodity Crunch: Grain's Gains: Profits or Pains?
In Part 1 and Part 3 of my last series of articles, I discussed the way that commodities have been the hot sector for institutional investors seeking a safe haven against a falling dollar and a loss of faith in the stock markets. Today, I want to take a closer look at the reasons why this sector has been--and still is--the place to be.

Investing In Silicon Suppliers: The Secret Side of Solar, Part One
It is often overlooked that the raw material supply sector of the solar industry can be just as profitable as the companies that make the end product. I'm talking, of course, about polysilicon and the various stages it goes through before becoming a module, or the panels we see on roofs.

IMF Gold Sales: The International Monetary Fund Plans to Sell 400 Tonnes of Gold to Help Offset a $400 Million Deficit in their Budget this Year
Many are speculating that the IMF gold sales will drastically push gold prices lower and by extension help the US dollar recover. But this tactic has been tried before with little success.

Cleantech Investments: Profiting from the Transformation of Beantown to Greentown
While ‘going green' may not currently conjure up the same financial giddiness as the discovery of a giant new oil field, it should.

ETF Investments: 4 Simple Rules to ETF Profits
In fact, as we discussed last week, 2008 may well go down as the year of the exchange-traded fund (ETF). ETF investments have become the tool of choice lately for those looking for an easy way to diversify their portfolios without buying into a mutual fund. In fact, the demand for ETF's has become so great that the number of ETFs in the United States has grown by 48% in the last year. To date, there are now 703 of the funds sold by 30 companies.

The Truth About the Bailout: The Only Cure is the Free Market
It's from the Neil Cavuto show and it is a great follow up to Tuesday's post on the insane mortgage bailouts that are working their way through Congress. Cavuto's guest is Nicole Gelinas from the Manhattan Institute, a free-market think tank in New York. Nicole absolutely nails the complete idiocy of all of these plans, explaining to Neil exactly why they just won't work.

Mark these Words: I agree with Cramer...
Congress, according to Cramer, wants to give a $6 billion tax rebate to some of the United States' biggest homebuilders, a group that's partially responsible for today's housing mess. But that's what happens when homebuilders threaten to withhold political contributions after being left out of the stimulus package.