A Tesla's Life Expectancy Is Shorter Than You Think

When you buy a brand-new car, one of the questions you generally don't ask is: "How many miles will this thing go before it dies?"

While a perfectly valid question, it's rarely asked or even considered, because the expectation for modern vehicles is that with proper care, they'll last decades if need be, traveling hundreds of thousands of miles before finally clunking to a final stop.

In addition, most of us know perfectly well that we won't be around for that last tank-full, that last trip, or that last ignition cycle.

Cars rarely die in the hands of their original purchasers, as they're passed off to offspring or sold/traded on the secondary market, to be replaced by yet another new model whose last day is so far beyond the horizon that it's simply not relevant.

With the emergence of the electric vehicle, all of that is changing... Or at least it should be.

You see, unlike vehicles powered by traditional internal combustion engines, which can and have gone over a million miles with proper care, today's EVs, sexy as some of them are, have a built-in termination date that very little can be done about.

An iPhone on Wheels

That life expectancy can be measured in charge cycles. You charge your Tesla S, drive it 300–400 miles till it's time to charge again, and there's your cycle.

That's 300 x 300–400 miles — largely dependent on driving conditions and driving style. If you're heavy-footed and like to feel that famous acceleration, your range will plummet. If spend a lot of time driving in cold, wet, or snowy weather or live in a hilly or mountainous region, that figure will also be affected.

That range of 300–400 miles is a very broad average, but even with that, we can get a fairly reliable life expectancy for your EV: Somewhere around 120,000 miles.

After that, the individual cells will begin to fail. Some will start failing before you hit that 120,000 milestone. Some will last longer. It's impossible to predict which will go first and which will last the longest, but with over 6,800 cells in each battery pack, optimal performance will be long gone even before the odometer reaches 120,000. 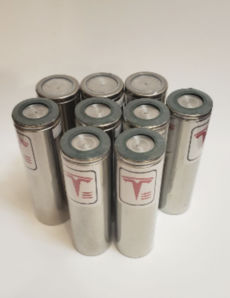 So what happens then? What do you do once your lithium-ion gas tank starts leaking fuel (metaphorically)?

Get a New One: The 21st Century Catch-All Solution

Most people will inevitably have sold their cars long before that point to trade up to a more current model.

The exhausted EV will be refurbished and sold off for a bargain to somebody who never had six figures to drop on a new car.

That's the typical Tesla story, and in many ways, it's a microcosm of modern life.

Like so many modern products, it comes out of the gates shiny and impressive, full of power and potential and cool features... but it wears out faster than the thing it was built to replace, finally dying after months or even years of declining performance.

You don't need to own a Tesla — or an EV of any brand — to know what that's like. Anybody who's owned a cellphone from the early 2000s and then upgraded to an iPhone is already very familiar with the concept of performance decay.

With Teslas, as with iPhones, the issue goes back to the lithium-ion battery.

Unfortunately, as lithium-powered rechargeable batteries are the current standard, there's simply nothing to be done. That's the truth we've been conditioned to accept. Batteries fail. Enjoy the cool features while they last.

Be ready to upgrade when that moment comes.

But what if that were not the case anymore? What if there were a real method for creating the elusive "million-mile battery"? Meaning you could have an electric vehicle that will last you as long as you want it and still remain perfectly functional to transfer into the secondary market when the desire strikes?

That would be nothing short of a game-changing evolution in the EV industry.

Well, right now such a technology is in the process of emerging.

It's no longer just in the experimental phase or sitting in the mind of some brilliant antisocial engineer.

There is a new battery already in production that could increase charge cycle life for EVs to 1,000, while at the same time increasing single-charge range by 50%.

No, it's still not the 1.5 million miles that a handful of ICEs have managed to rack up across the whole of automotive history, but it's more than enough to turn an EV into a "forever car" for just about any buyer.

Here's the kicker, though... These new batteries, which are currently being built in smaller models for the consumer tech market, have another market-changing advantage: charge speed.

Able to take on a full charge up to 70 times (that's no typo) faster than lithium-ion, you will be able to charge your Tesla from empty to 100% in less time than it would take you to fill up your ICE-driven car at the pump.

Charges Faster Than You Can Pump

Can you imagine that? In less than a minute, you could put another 600 miles of range into your car. Just like that, this new battery will destroy the biggest entry hurdle for prospective EV buyers.

This is only the beginning of the advantages that this new technology promises to bring. Other improvements include increased durability, a highly simplified supply chain (which is no small deal today, as you well know), and soon enough, lower cost.

The company that's building these batteries is already in talks with major prospective corporate clients about licensing the technology for a wide variety of consumer applications.

But here's the thing... It's not about the batteries themselves. It's about the production method of the space-age nanomaterial at the core of the batteries.

When you look at this material's physical properties, it's borderline alien. Here's just a taste: It's 200 times stronger than steel yet light as paper.

That comes at a price, however. And up until recently, that price was $100,000 per kilogram.

Ever since a small Australian materials company figured out a way to make it for less than 1% of that cost, the true potential for next-generation rechargeable batteries has started to become apparent.

There's obviously more to the story. Much more. Another taste: This company trades on two North American exchanges and is valued at less than a quarter-billion U.S. dollars.

Can you believe that? Less than $250 million for a company that could completely disrupt a multitrillion-dollar/year sector in just a matter of years.

Enter here to learn the rest.