2 Ways to Profit from a Bear Market

In 1994 when I was starting out in stocks, I asked an old, grizzled — yet highly successful — commodities trader for his secret to surviving a bear market.

“Son,” he replied in a cigarette-hoarsed voice, “it’s quite simple. My first course of action… a bear market is like dealing with a crazy wife.

Don’t waste your time trying to rationalize with her, because it’ll never work.

Accept it for what it is… and run.”

“Rule #2 — and this is very important, so listen closely — hide your cash.”

I began to laugh.

“Your first survival response will be to throw money at her… hoping that the new pumps she buys off of QVC will make her happy.

But nothing is further from the truth.

The euphoria she gets from getting your money is like a sucker’s rally in a bear market. It doesn’t last very long.”

Finally, he left me with this…

“When the bear market ends… just like your marriage, you’ll know.”

What’s next for the market?

Unfortunately, I think this dance macabre market will continue until the end of the year.

There are two events coming in the second half of 2010 that could prolong the bear market:

Check out the graph below. As you can see, Option ARM resets start to become an issue during the third quarter of this year, and really shoot up in 2011.

As Wealth Daily’s resident housing and mortgage expert Steve Christ has pointed out numerous times in these very pages, most Option ARMs are negative equity.

The prevailing interest rate isn’t likely be a problem, since mortgage interest rates are lower now than they were five years ago...

The problem is that most Option ARM borrowers have probably not been paying down their principal.

Back to the chart below. Notice that at its peak, the Option ARM wave will be a little bit smaller than the subprime wave of 2007-2008. The subprime crisis has over. 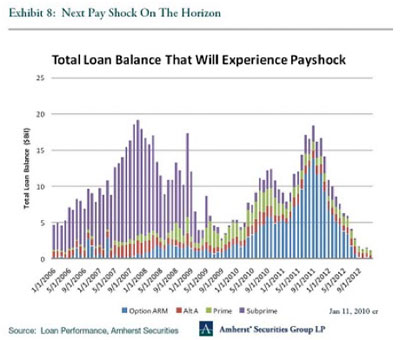 Thousands of American homeowners are starting to see their monthly mortgage payments skyrocket, dealing a fresh blow to the already shaky housing recovery.

So the market could get hit with a fresh slug of foreclosures… adding to the deflation fears we currently see in the bond market.

If that wasn’t bad enough, tax rates on capital gains are set to increase next year.

Obama has publicly said that he will let the Bush-era capital gains tax cuts expire on schedule this year, so it’s important to know how they will affect your investments.

Take a look at the tax rate charts below:

Here’s what the rates are this tax year: 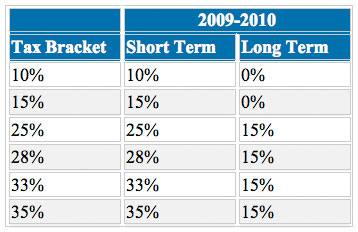 The 28% bracket was lowered to 25%, the 31% went to 28%, etc. If we assume the pre-cut brackets along with the pre-cut capital gains rates, we have the following: 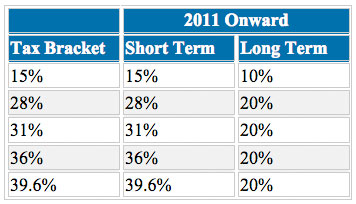 As for dividend income, they are set to be taxed as ordinary income in 2011.

Every professional investor and trader I’ve talked to has told me they have or plan to sell any profitable positions they have before the end of this year.

Selling is always a net negative for the market.

So what do we do now?

An excellent example of bullet point #3 is Nick Hodge’s natural gas play. Here at Wealth Daily and at Angel Publishing in general, we scour the earth looking for highly profitable investment.

Nick’s natural gas play is one of them. 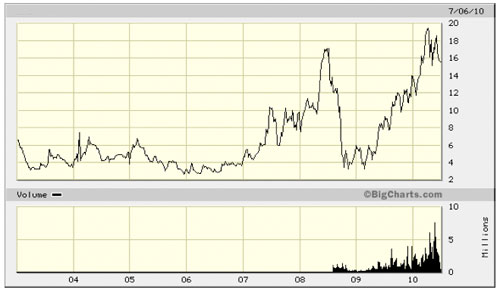 This stock was sitting at a five-year high just a few weeks ago.

And my Grey Plague stock is also sitting at a near a one-year high: 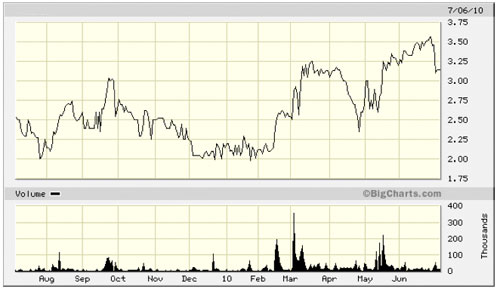 Winning stocks are out there… but in a bear market you’ll have to look closer.