And a Look at the Life of a Gold Company

It's arguably one of the most profitable secrets to investing in gold stocks...

A pattern of rapid growth found repeated in the early lives of today's most successful gold companies can be the key to guaranteed gains.

And it all starts to become clear when you take a closer look at the...

Life of a Successful Gold Company

The early lives of successful gold stocks correspond to the three general stages of any growing natural resource company: Discovery, Development, and Production.

In today's market, a new gold company will normally start off quite small when it first goes public. It will typically have a handful of unexplored gold prospects with a focus on one or two.

During this discovery stage, a gold company will conduct extensive field exploration on prospective mineral projects to identify and prove the existence of a significant gold resource. 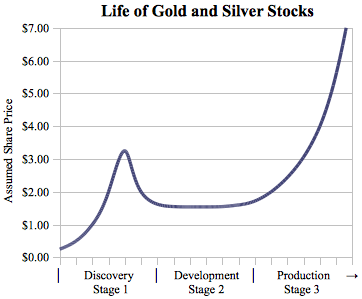 If a gold company makes a sizable discovery on one of its properties, speculation can send share prices soaring by hundreds — or sometimes even thousands — of percent in short order.

But as the initial excitement is quieted, the stock tends to pull back and stabilizes as the company develops the discovery into a producing gold mine.

This development stage can be a long and difficult — and sometimes boring — process. But it can also one of the most profitable times to be an investor.

The best time to buy gold stocks has historically been in the mid- to late development stage. At this point, the exploration risk has been essentially eliminated, while upside potential is maximized from near-term production earnings and future growth.

A successful gold company will eventually achieve positive cash flow and use it to expand operations and increase production for continued future growth. This growth creates new earnings that continue to propel share prices sharply higher.

A great example of this model is GoldCorp (NYSE: GG, TSX: G). Take a look at shares of GoldCorp as the company made their first big gold discovery:

But the initial excitement wore off; the stock pulled back below $2 as the company went into the long and difficult development stage.

After a few years of development, GoldCorp finally began production and share prices took off. The Red Lake Gold Mine has grown to now include two operating complexes: the Red Lake Complex and the Campbell Complex. Red Lake is Canada's largest gold mine and is expected to produce over 600,000 ounces of gold this year.

The company has expanded worldwide operations to now include 11 gold-producing assets that are expected to yield 2.4 million ounces this year. Today, GoldCorp is a $30 billion company with a $40 stock. Shares of the company have yielded a 1,900% since the company began producing gold from Red Lake.

The home run gains to be made from GoldCorp may be over. But there are many other public gold companies that can be expected to follow a similar model as they take their projects through discovery into production.

The three-stage model of the life of a gold stock also generally applies to all companies involved in natural resources, including other precious metals like silver. With that in mind, I'd like to very briefly tell you about...

Both of these companies have already made significant discoveries, which rapidly lifted their share prices. Today, both firms are working to develop their projects into economically feasible assets. Take a look:

Share prices increased as much as 600% from $0.50 to $3.50 between the time of original discovery and resource estimate. After that, share prices tapered off as the buzz from the big San Antonio gold find faded.

Pediment is currently developing the project and has recently reached a new 30-year agreement with the local government (called the Ejido) that allows Pediment to continue to freely explore the property and propose development and operation a future San Antonio gold mine.

In March 2005, Orko Silver began drilling exploration on its La Preciosa silver project. A few months later, the company made a significant silver discovery when it drilled into high-grade silver grading 200 to 300 grams per tonne. After three years of extensive exploration, the company reached its goal of 100 million ounces of silver resources in March 2008.

In April, Orko and Pan American Silver (NASDAQ: PAAS) announced that the two companies would create a joint venture to develop the La Preciosa project. The companies are currently working together to upgrade the category of the current silver resources. This is a necessary step in completely a feasibility study to prove an economic resource.

My colleague, Luke Burgess, is investing in gold and silver stocks in the same way. He recently recommend a small American silver company that just started production and is expected to ramp up output by nearly 20,000% over the next 12 months.

But he's not the only one. Many of my gold and silver analyst peers are quickly moving into mid- to late development stage stocks. This is typically the period when financial institutions and major investors will begin buying a gold stock. It's when the loose money rolls out and the more steady-handed investors establish positions and volatility is decreased in share prices.

In the mid-1990s, GoldCorp proved its ability to take the Red Lake gold project all the way through the development stage into production. Early investors have been rewarded with gains of almost 2,000% since that time.

Today, companies like Pediment Gold and Orko Silver are vying to prove their ability as well. As investors, we can leverage the development of gold and silver projects by owning shares of the companies that have advanced-stage development projects.

Peak Gold is a Myth
Wealth Daily Editor Luke Burgess discusses the differences between peak oil and peak gold, concluding there is less evidence to support a peak in global gold production.
Gold Mining Production Costs
Wealth Daily Editor Luke Burgess claims that a surge in mining production costs may help buoy gold prices for decades to come.
Gold Fever: Canada's Abitibi Greenstone Belt
Wealth Daily's Greg McCoach discusses one of the best places in the world to explore for and develop gold deposits.
Why I'm Buying Gold Dips
Wealth Daily Analyst Adam Sharp explains why the head-fake recovery may give us a rare opportunity to buy gold before it takes off again.
Buffett's Envy: 50% Annual Returns, Guaranteed
Warren Buffett once told investors at an annual shareholder meeting, "...it's a huge structural advantage not to have a lot of money. I think I could make you 50% a year on $1 million. No, I know I could. I guarantee that."