12 Shocking Facts about the Bakken

Why the American Oil Boom is Here to Stay

The extraordinary growth in oil production in North Dakota has been well-documented in Wealth Daily.

But I thought I’d change it up today and tell you about the law of unintended consequences regarding the hyper-speed growth in economic output in the Bakken.

Earlier this week, one of my sources sent me an article from Fargo, North Dakota radio station KFGO.

The article lists a number of new developments (some good, some bad) in Western North Dakota, where the economy is booming, the jobless rate is less than 1%, and there are bound to be some growing pains.

1. Traffic accidents, especially fatal traffic accidents, are of very high concern. At one location on Highway 85 south of Williston, a traffic count was conducted in October 2011. In one 24-hour period, there were 29,000 vehicles through the intersection — with 60% of the traffic being semi-trailer trucks.

2. Traffic is typically backed up for half to three-quarters of a mile. One person said he recently sat at an intersection on Highway 85 for 30 minutes waiting for an opening in the traffic to cross over.

4. Williams County allows three campers per farmstead; almost all of the farmers have three campers on their property — and are charging $800 per camper, per month for rent.

5. The Wal-Mart in Williston no longer stocks shelves; they bring out pallets of merchandise at night and set them in the aisles, and customers shop from the pallets.

6. On January 1, the Williston Wal-Mart had 148 campers parked overnight in the store's lot.

7. The Williston McDonald's just announced it will pay new workers $15 an hour — as well as a $500 immediate signing bonus and full medical benefits.

8. The local restaurants are full, and with limited staffing, they usually just have the drive-through open. The restaurants that have inside seating are now experiencing an hour-long wait at all times.

10. Trinity Hospital in Minot has just hired 115 nurses from the Philippines because they cannot get enough local nurses to apply.

11. The Williston General Motors dealership has now become the No. 1 seller of Corvettes in the upper Midwest.

12. The Williams County Jail has increased bookings by 150%, with a 100% increase in the inmate population. Bonds of $5,000 to $10,000 are typically paid with cash out of pocket. The Williams County Sheriff stated that a couple weeks ago, he received a $63,000 bond in cash, carried into the jail in a plastic Wal-Mart bag.

The dramatic growth in this region is only going to accelerate...

And the infrastructure needed to support this growth will be a boon, too.

Last month, Canadian Pacific Railway and pipeline company Enbridge announced they will be investing heavily in rail shipping capacity for crude oil in the Bakken area of North Dakota and Saskatchewan.

Enbridge Energy Partners, Enbridge’s U.S. subsidiary, plans to move 10,000 barrels of oil per day by July 2012 through the planned railcar facility. A second phase would add an additional 70,000 bpd of transportation capacity by early 2013.

The development would increase Enbridge’s existing railway system, which began in 2010. The total increase in capacity will be about 145,000 barrels per day, which will be essential in allowing the increasing production of Bakken oil to get to market.

The company recently opened a rail-loading facility 25 miles from the U.S. border. This facility allows railcars to be loaded directly from trucks coming from the Bakken oil fields.

Once constructed, the pipeline will connect existing Enbridge facilities to the Enbridge main pipeline system, which transports the products to the U.S. Midwest, Eastern Canada, and Midcontinent.

This development is pushing Bakken stocks to new highs.

As you read this, the largest Bakken producer, Continental Resources, is sitting at a multi-year high: 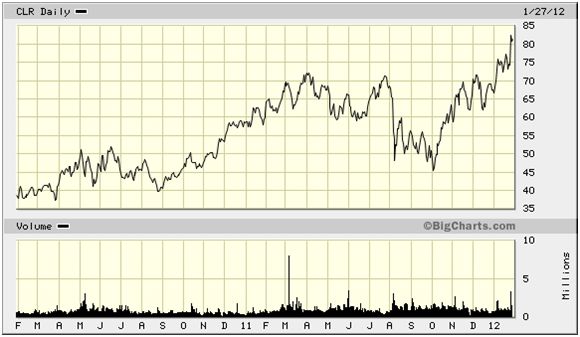 In the wake of the Keystone XL Pipeline delay, North Dakota once again confirms why its unemployment rate is the lowest in the nation.