Hyperinflation and the Next Depression

Written by Christian DeHaemer
Posted May 23, 2011

I just got back from a week in Nairobi, and I was stunned by the high prices.

I'm not saying it was like New York or Tokyo prices. But I am saying when I go to a third world hell hole, I expect to live like a king for a hundred bucks. If I wanted to pay $2 for a beer or $18 for a T-bone, I'd stay in Baltimore.

Those are not third world prices — or at least they haven't been for the past fifteen years.

There is no doubt the financial and political leaders in this country have set out to deflate their debts by destroying the dollar... 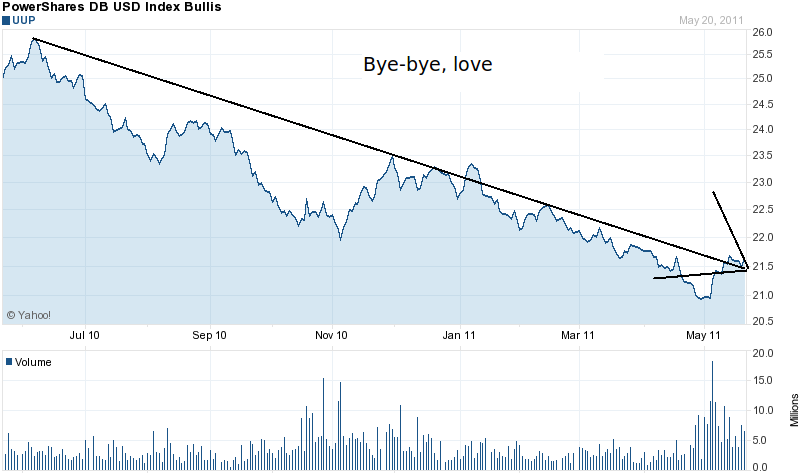 This destruction of the greenback is exacerbating the price increases caused by global demand for most commodities.

These costs are passed on to manufactures and again onto consumers.

The United States is destroying the dollar to pay off debt, “stimulate” job growth, save housing, and fight deflation. For the record, we have record debt, high unemployment, declining housing prices and, true, and end to deflation. One out of four isn't bad.

It's not a one-way ride down. As you can tell by the above chart, companies have gotten a respite as the dollar bounced in May.

Commodity prices in the dollar terms have taking a 20% hit this month. Oil is down to $98 from $112. Gold and silver sold off. Even wheat is down 12% since its February high...

This is a good entry point.

The selloff won't last; it's just a reflection of Europe's financial situation.

Greece, Portugal, Hungary, and Spain have yet to solve their debt problems. Anti-austerity riots have sent investors into the “safety” of the dollar.

This is rain-on-your-wedding-day type of irony.

Why would you buy an asset that can be made worthless by creating more of it?

Not only that — but those in charge of the printing press claim that they will do “everything possible” to destroy the dollar.

Bernanke even spelled out what “everything possible” entails: “meet the crisis through increased government spending and tax cuts.”

The smart European money is back into hard assets like gold. In Euro terms, gold is pushing a new all-time high:

The seesaw will adjust, and the dollar will continue its downtrend as all currencies (except the Chinese yuan) race to the bottom.

Once currency destruction and the subsequent inflation starts, it is extremely difficult and very painful to turn around. It always requires a new government with a new mandate. It usually requires a revolution and a new constitution.

The turning point is always the result of a swift and sudden collapse.

Already, the U.S. debt to GDP ratio is higher than that of Spain, Portugal et al.

For instance, we borrow 37% to cover federal spending. Greece only borrows 30%.

In the past fifteen years, we've seen three cases of excessive liquidity creating bubbles in dot-coms, emerging markets, and housing.

Never, ever, not once — nay, not even close — have the Fed or Treasury been able to switch from massive dollar pumping to a soft landing without a massive crash.

Here are the official inflation numbers. Remember that Social Security and other programs are tied to inflation, so it is in the government's best interest to under-report. Regardless, the trend is correct.

Since 2008, the government has been fighting deflation. But for the past year, what we've had is increasing inflation.

You can see the disconnect between the CPI and the PPI: The PPI is finished goods. The CPI is consumer prices.

These prices will continue to rise. The government has declared this is their goal. You can't fight the Fed.

What will happen when we have inflation and high unemployment and poor housing?

Will they print more?

Can you spend your way out of a debt problem?

Running Out of Time

The U.S. is printing and pumping and easing beyond what has ever been done before.

Each spending party was replaced by a morning hangover and a new bowl of cocaine on the coffee table. The U.S. economy is on a three-day bender and running out of money to buy more stimulants...

The drug dealer is brooding in the corner, playing with his walking stick and waiting to get paid. No one remembers who called him, or who it was who said, “Just keep filling the bowl.”

But good times don't last forever. This party is winding down.

No one quite knows the specifics of how it will end, but it won't be pretty... And the smart folk left the hotel room quietly hours ago.

I'm not telling you this to scare you; I'm telling you because it's time to protect yourself.

That's why we've put together this action plan on hyperinflation. Protect yourself and prosper.