Will This Carbon-Neutral Rocket Fuel Save the World?

When I was a kid, I remember one of the things that would really grind my gears was hearing other little kids talking about how fast the SR-71 Blackbird was.

"Faster than a bullet," was a phrase that they liked to throw around — and it was actually true, despite how hyperbolic it sounds.

The SR-71's top speed of 2,455 miles per hour (3,600 feet per second) made it about 20% faster than the muzzle velocity of a standard 5.56mm rifle bullet — the standard issue NATO battlefield cartridge.

So why did hearing these proclamations of greatness anger me? Because the SR-71, fast as it was, was nowhere near the fastest.

That honor went to a lesser-known, far less beloved, and far less beautiful aircraft: the X-15.

In order to achieve and sustain speeds like that, it also had to fly almost four times higher than the SR-71. So high, in fact, that several of its pilots were awarded astronaut's wings. 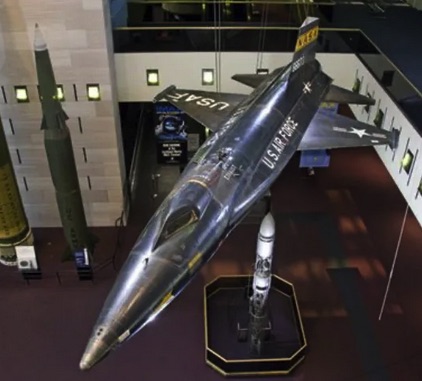 Had the SR-71 been flying alongside the X-15 on that day, it would have been overtaken at a speed differential of almost 2,100 mph.

Much about the machine is unique and amazing but perhaps nothing more so than the fuel that took it to those heights and speeds.

Yet despite its decidedly unglamorous reputation, ammonia is actually an incredibly versatile, potent, and environmentally friendly energy source.

Sounds like one of those too-good-to-be-true stories, but it's true. Ammonia fuel is so clean that its exhaust can be cooled and safely sipped from a glass... and yet still deliver enough power to bring airplanes to the edge of space.

So what's the catch? If it's so great, why isn't ammonia our primary fuel for the consumer and commercial markets instead of gasoline?

In five–10 years, your local filling station could be dispensing this stuff right alongside gasoline. In another five–10 years, it could dispense only this stuff, with gas and diesel a distant memory.

Right now, when the wind is blowing and the sun is shining, but nobody is home running their washing machines, lithium-ion batteries are used to soak up excess kilowatts. In the future, ammonia production facilities could be adapted to produce and store ammonia to either sell or transform back into electricity during peak-demand hours by using that ammonia to run a carbon-free generator.

Trading Electrons for Fuel and Back Again

The potential is so great it's hard to fully quantify... but it's safe to say that by the middle of the century, we could easily be running on an ammonia-dependent economy.

It's so new that it started trading under its current ticker symbol just two weeks ago.

In other words, it's an embryo — a tiny speck compared with the giant market its technology could be commanding in the coming years.

Get all the information now... or wait another day and watch the stock go up another 25%.

The choice is yours. Enter here for instant access.