Gold is a bit confused right now. But don’t worry, it may be telling us something many people are not paying attention to. 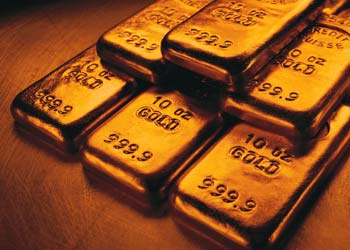 The more investors run to gold, the more the prices go up. But as soon as there is any upward movement in the dollar’s value, gold feels neglected, as investors sell and head towards currencies.

So why is gold rising even though it seems as though the dollar is getting better?

It seemed people thought, “Grab gold because Yellen will continue the stimulus.” We saw the same thing happen back in September when the Fed announced it wouldn't be tapering until the economy improved much more. That means there’s more money being pumped in, and that just devalues the dollar.

Plenty of investors have been against the stimulus for a while now. It’s made interest rates plummet, and the more money that gets printed, the less the dollar is worth. How can investors make money from that? Well, gold is one option.

But wait, gold has been declining this year… a lot. It plummeted 26 percent this year, and there’s not enough time for it to regain itself, so it will end up experiencing its first annual drop in 13 years. Again, it’s the Fed’s fault. That’s the confusing part. But here’s why.

Anytime there was speculation the Fed might taper, gold declined. If the Fed does scale back on its bond-buying, this would boost the dollar’s value. What better time to make money off currency than when it’s already at a low and on its way up? That explains why people dropped gold instantly.

However, the Fed didn’t taper, which explains the shift up for gold. Gold had a habit of going down before a Fed meeting announcement and then back up after it when there was no taper revealed.

Gold’s Future with the Federal Reserve

Let’s talk about what’s going to happen in 2014. Yellen is going to take over for Bernanke. Gold went up when the nomination came through, and it’s pretty safe to say the same will happen when she takes her seat as Fed chair.

After that, will gold rebound to the highs everyone would love? It depends on when the Fed tapers and by how much. If it’s a lot, gold will go down. If it’s not very much, gold will increase or at least stabilize.

People are already getting antsy about the Fed’s announcement in December. With the economy continuing to show improvements, it would make sense for them to taper, but are the improvements enough for that to happen? Maybe not just yet…

Yellen has been known to follow Bernanke, so she will likely keep the stimulus going for at least a little while when she first steps into office. She doesn’t want to ruffle any feathers as soon as she gets in.

Gold will rise with that… However, as many analysts predict, a taper is likely in March or April, just as Yellen gets comfortable, so gold will start to decrease.

Now, if Bernanke decides to taper before he leaves, well, then we’ll see the drop in gold much sooner.

According to Kitco News, gold will probably end up dropping another 12% before it enters a bull market.

So what is gold telling us?

Gold is still at the mercy of the dollar. What this means is as volatile as it is with the Fed’s back-and-forth on the possible taper, gold will continue to play off what the dollar does into 2014.

When the taper does happen, you’ll see a sell-off in gold. Gold will go down, and you may want to consider picking it up. The economy is going to suffer when a taper happens, and what happens when the economy suffers? People run to gold.

And what happens when people invest in gold? Prices go up. Hopefully, you’ll already have it in hand, so you can cash in on those returns before the economy strengthens enough to make gold prices fall once again.