Why Rich People are Living in Tents

This week is “Winter Awareness Week” in North Dakota.

Some of the precautions the North Dakota Department of Emergency Services recommends to prepare for the state’s brutal winters include:

I live in Baltimore, Maryland... And even I would know to do these things if I visited NoDak during the winter.

But in North Dakota — a state that averages three feet of snowfall per year — the average temperatures for the months of January, February, and March are 9, 17 and 28 degrees respectively…

You would think North Dakotans know what to do to prepare for a wintery onslaught...

But the truth is North Dakota officials have real reason to be concerned.

You see, the housing shortage in North Dakota is so bad, makeshift tent cities are popping up in parks and parking lots all over eastern part of the state.

And the people living in these tents are from states like Texas, Louisiana, Alabama, and Oklahoma.

Many are from Mexico — and have never seen snow, much less a blizzard.

The housing crisis is so dire that a former church in Killdeer and a former hospital in Stanley, ND, are being converted to apartments.

In towns like Minot and Williston, temporary housing used in the Winter Olympics in Vancouver and for people displaced by Hurricane Katrina is being shipped in...

Obama even sent HUD Secretary Donovan to the state this past August to get a first-hand look at the housing crisis.

Housing prices have jumped 20% from a year ago. Only 1% of the total rental property supply is available for rent.

Lease and real estate agents can barely keep up, often not returning phone calls for days.

The convenience store in Stanley — the Cenex — is struggling just to meet demand.

“We really just can’t hardly keep up with the explosion of new business. I’ve been here just over a year and we’ve been doing construction, remodeling ever since I got here. Right now, we just need to catch our breath,” said a store manager.

What’s going on in North Dakota?

It seems like new oilfields are being discovered almost every year in NoDak.

If you followed our advice from the very start, this is what you made from our Bakken boom stocks: 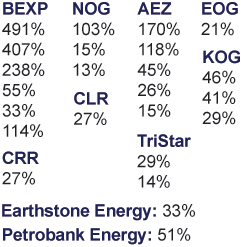 It’s been a profit bonanza for sure in the Bakken.

But with the technological breakthrough of fracking and horizontal drilling proven in the region, other previously undrillable formations are now open for business...

The latest is the Spearfish formation in ND near the Canadian border. In April of this year, EOG announced the Spearfish discovery.

The Spearfish is a Jurassic formation, and is at a much shallower depth than the Bakken — only about 3,000 feet below the surface — so it should be cheaper to drill.

Drilling times for the Spearfish wells on the Canadian side (called the Waskada) were only about four days from spud to reaching total depth...

With 80,000 net acres, EOG holds a sizeable amount of Spearfish acreage and plans to utilize six laterals per 160-acre spacing.

Initial production of the wells is estimated at around 200 barrels per day. The two existing U.S. wells are producing 285 and 305 barrels per day, respectively.

The Spearfish is picking up steam.

This past August, Minot-based media outlet KXMCTV reported, "… Major oil companies are making moves that suggest a second oil boom is in its infancy."

Lynn Helms, director of the North Dakota Department of Mineral Resources, indicates oil companies are expecting to drill 50 wells this year to figure out the edges of the primary part of the Spearfish play, and 50 to 100 next year.

They then expect to go into full development mode, which means they could drill anywhere between two and seven thousand wells up there.

Of course, we’re hot on this development.

And we’ve discovered a $7 stock that will go great guns with the development of the Spearfish… as well as many of the other fracking and horizontal drilling formations.