Why Donald Trump is Always Bankrupt

Donald Trump - the Don of real estate – has been betting his chips on casino development for decades, and has made a fine go of it, becoming the undisputed Godfather of the luxury entertainment resort industry.

But did you know that the Don has gone bankrupt on three separate occasions? Make that four.

With one of the company’s two hotel casinos already closed, the remaining one is on its last breath, struggling to survive, and could succumb any week now. In fact, the entire gambling industry in Atlantic City itself – the home of Trump Entertainment Resorts – is on the verge of succumbing as well.

What went wrong? If this can happen to the most famous property entrepreneur of our time, might there be a lesson here for the rest of us investors of humbler means? Whether we invest in properties, stocks, or anything else for that matter?

There certainly is an important lesson here, one which Atlantic City is learning the hard way.

The Fall of Atlantic City

For all its fame, Trump Entertainment Resorts Inc. owns (or owned) only two casino hotel resorts, both in the once popular gambling mecca of the east coast, Atlantic City, New Jersey. Since gambling was legalized in 1976, the city became famous as the good twin to Las Vegas.

But over the past several years, the lour of easy money swayed other states in the region to approve legalized gambling as well, including Connecticut, Pennsylvania and New York. Atlantic City’s monopoly on gambling in the east has been steadily corroding ever since.

As the first of Trump’s two casino resorts in the city - Trump Plaza Hotel and Casino - closed its doors in September of this year, the Washington Post summed up what the closure meant:

“In a rather remarkable illustration of Atlantic City’s downswing, this is the fourth casino to close in the city this year, costing thousands of people their jobs. Atlantic City began the year with 12 casinos, but a third of those have closed — and a fifth casino, Trump Taj Mahal, is expected to shut down in November.”

But a brief reprieve has been granted to Trump’s second casino, Trump Taj Mahal, just this week, thanks to a last minute loan by the company’s largest creditor, Carl Icahn, whose $5 million emergency loan should keep the resort operating until January. If the casino manages to turn itself around and emerge from bankruptcy, Icahn has agreed to fund the company with an additional $100 million.

Of course, Icahn is not extending the loans simply to be a nice guy. If Trump Taj Mahal survives, and if the courts approve of Trump Entertainment Resort’s bankruptcy exit-strategy, Icahn would become the sole owner of the property. There is no word yet on whether Trump will appear on an episode of his own Apprentice show in which he would promptly fire himself. Wouldn’t that make a great episode? I bet it would beat the Super Bowl in viewership.

But what went wrong? Things were going so well for Atlantic City for so many decades since the late 1970’s, becoming known the world over for its gambling… Oh, that’s it, isn’t it? It became known for its gambling and pretty much nothing else.

“Starting with the 1978 opening of Resorts, the nation's first casino outside Nevada, Atlantic City for years was the only place to play slots, cards, dice or roulette in the eastern half of the United States,” explains New Jersey On-Line. “The cash kept pouring in, the busloads of visitors kept coming, and the revenue charts went one way: straight up.”

NJOL then isolates the city’s folly: “Intoxicated by years of success, Atlantic City missed numerous opportunities to diversify its offerings, widen its customer base and fend off competition that clearly was on its way even 20 years ago.”

As per the graph below, the signs pointing to Atlantic City’s demise were visible as early as the turn of the millennium. As more and more states began legalizing gambling, fewer Americans saw the need to travel to the traditional hot spots of Las Vegas, Reno and Atlantic City. The upstarts were invading on the old-timers’ turf, which is clearly reflected in the employment figures for the casino industry across the nation. A changing of the guard was unceremonially taking place. 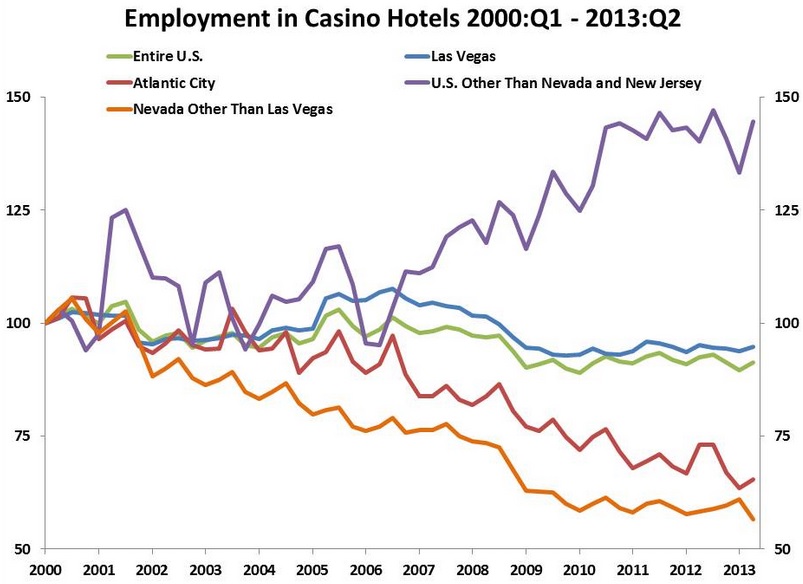 For a while throughout the 1980s and ‘90s, Atlantic City was at the forefront of a new wave that was destined to sweep across the region, and it stood as the top provider in that market. But it had a one-trick pony, and when all the other ponies started performing the same trick, Atlantic City had nothing else with which to stand out and shine.

It really is as simple as that… diversification.

Learning from the Don

Investors can learn a great deal from the experiences befalling Trump Entertainment Resorts and Atlantic City, the greatest of which is the importance of owning more than winning holding.

For instance, a high flying stock like Apple (NASDAQ: AAPL) or Tesla Motors (NASDAQ: TSLA) or Amgen (NASDAQ: AMGN) can seem at the moment to be invincible with absolutely no end at all to its winning streak. But isn’t that what casino operators like Trump himself believed regarding Atlantic City?

You can’t ignore the possibility – or better said, inevitability - of tomorrow’s up-starts coming along and taking business away form today’s top dogs. As investors, we mustn’t be so comfortable with our winning holdings that we neglect to keep searching for the next outperformers to add to our portfolios.

Because at some point, every top dog gets overthrown. Even the big boss himself will one day get fired.