Why Did All Digital Currencies Drop This Week?

There was blood in the water for digital currency investors this week. Almost every coin tumbled in value, and it painted Coin Market Cap red. 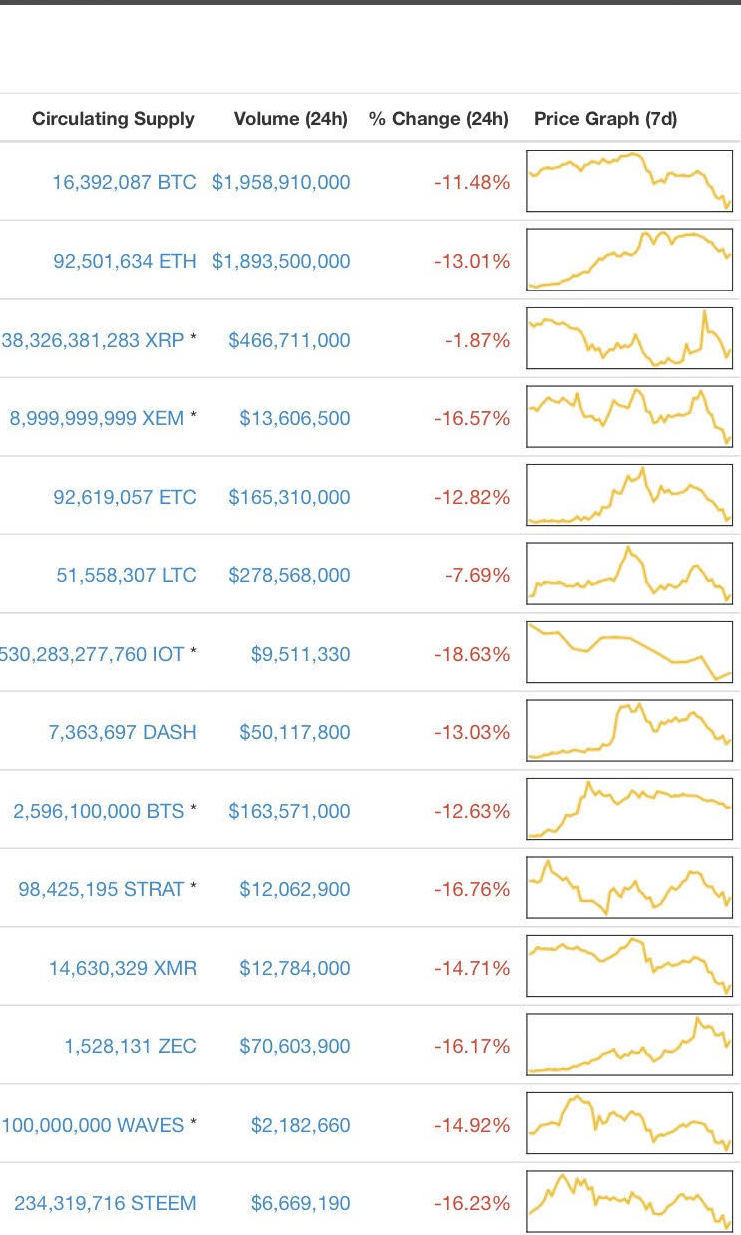 Before the bloodshed began, Ethereum (ETH) and Bitcoin (BTC) were on a tear. Both coins increased in value dramatically over the last two weeks. Investors rejoiced. Analysts began to sweat.

No matter how you reacted, the value surge was too dramatic in comparison to past trends. Surges in the past have triggered violent corrections. That meant that when Ethereum sat at $420 and Bitcoin was near $3,000, a crash was imminent.

The crash came on June 15th. In a day, the total digital currency market lost $16 billion in market cap.

Today, the total digital currency market cap is back at $100 billion. Ethereum is holding $350, which indicates that it's stabilizing.

But the effects of the massacre have resounded with investors: Thousands panicked and sold.

Regret is a sad story being told all over Ethereum Reddits and other forums.

But these things will happen again and again.

Ethereum, like all markets, has its corrections. It's best to learn about the corrections. Trust me, I know it's hard not to sell when you're bleeding money. But you can rationalize it and pull through.

ICO and an Overdue Correction

As you can see in the screenshot above, every currency took a hit. And a lot of it was because all of them rose too quickly alongside Bitcoin and Ethereum.

And there was a key event that drove Ethereum's rise: Initial coin offerings (ICOs).

For those of you unfamiliar with ICOs, they basically provide companies with a way to generate venture capital through their own cryptocurrencies.

The problem with this is that many of these companies ask for payments in either Ethereum or Bitcoin.

Ethereum has become the most popular ICO currency. This created a bubble as many investors bought Ethereum as an exchange rather than as an investment. These investors hoped that if they forked over ETHs for a handful of ICO tokens, they would end up millionaires.

Of this, I am skeptical. There are dozens of ICOs that are drifting around the internet right now. I would say 95% of them are useless.

ICOs present many of the same dangers as crowdfunding. When the Jumpstart Our Business Startups Act (JOBS Act) happened in 2012, normal investors began to dabble with crowdfunding or private equity. But many investors didn't know how to analyze a young company for long-term potential, which led to a lot of failed investments.

The same thing is happening with ICOs.

Startups that generate capital through currencies take advantage of investors. And it has an impact on Ethereum's price with price drops and surges.

A good example is Bancor, a recent ICO that someone pointed out in the comments last week. (Thanks, H. Baker. You made a fantastic point!)

The Bancor ICO definitely bolstered Ethereum prices. To date, Bancor has raised more capital than any startup in history. It raked in $147 million in ETHs. And that's an obscene amount of money for a startup to collect.

It doesn't matter how cool Bancor's token or concept is — it encouraged investors to buy more ETHs and spiked the market. And it isn't just Bancor, dozens of ICOs come online every day. Some show promise, like Raiden (which I will follow up on closer to an ICO).

And Then There Was Bitcoin

Long-term Ethereum holders are eagerly awaiting "the flippening" — the moment when Ethereum surpasses Bitcoin in market cap and all hell breaks loose.

The time is coming. And it will hit us sooner rather than later.

"The flippening" may cause crypto chaos, and it will also finally get Ethereum out from under Bitcoin's shadow.

I often tell investors that Ethereum is like Bitcoin's little brother. It will follow Bitcoin through every stupid dip and correction without question. We have observed that since the beginning.

This means that until Ethereum surpasses Bitcoin, we will have to endure the same corrections Bitcoin goes through and so will every other digital currency.

With Ethereum, I'm the first to admit when I don't know what's coming. The correction has thrown the market into a murky place.

We need to hold $350, which became a new point of resistance after the correction. The EEA announcement (when it finally happens) will likely influence prices.

A new hold formed at $260 and it appears that for now, the carnage is over. If you watched GDAX during the digital currency correction, you would have seen many Ethereum "whales," or people who hold over 1,000 ETHs, buying and selling back in. When big players exit Ethereum, regular investors panic, and big players get to buy back in at lower prices.

"Whales" ultimately influence prices. But their long-term interests are in Ethereum's growth. Such buying and selling has ceased.

I know, I know. We've waited patiently all week and the EEA still hasn't announced its members. But a small nugget of hope appeared on the web yesterday. This rumor is not confirmed. I want to emphasize that so investors don't lose their heads. But, based on an application that was quickly hidden on the website, Mastercard is an EEA applicant.

The screenshot above was taken from a cached version of the EEA site, meaning it has since been removed. The post appeared yesterday. The source remains unproven and will not be proven until the official new members are announced.

Good luck with your investments as we head into the weekend.

As always, feel free to follow me on Twitter at @AlexandraPerryC. I try to stay on top of article questions.