Why Copper Prices Could Soar in 2014

Copper is Going Up!

Many investors stay away from investments that have been sold off because they fear they will go further down. While this makes perfect sense, it’s not always the right move. 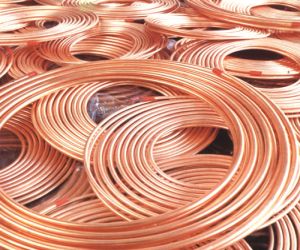 As you know, what goes down must come up eventually. Speculating when investments are about to go up is the way to cash in on a lucrative return.

Copper is one of these investments. Over the last year, its price has been the lowest in history. Last January and February, prices jumped above $3.80, but they decreased all the way to a bottom of just under $3.10 by the summer. Since that low, they've been rising to the current level of around $3.33.

The recent increase in prices is expected to continue as China uses up its surplus of copper and boosts its demand. The nation has the money for it because of its improving economy. Its service industry has also been growing at a steady pace, showing there is going to be a growing need for copper.

China is importing more copper every year. In October, it imported 406,708 tons, and in November this grew to 435,613. That’s a significant increase, and it China's copper demand is strong and growing stronger.

But it’s not only China affecting future copper prices. The United States’ weaker dollar is coming into play, too. The weaker the dollar gets, the easier it is for foreign buyers to purchase the metal, which is priced in dollars. This has helped boost demand.

Supplies also have a big hand in the rise in copper prices. One of the biggest mines in Peru decreased output due to limited power supplies. Chinalco Mining Corp International (OTC: CNMLF) reports its Toromocho mine output will be 37 percent lower than expected in the next year. This will aim to reduce fifth of next year’s surplus, which could end up affecting London’s copper prices.

Australia is also low on production. Oz Minerals Ltd (ASX: OZL) has hit a low in copper production that hasn’t been seen in 20 years.

And though there's still expected to be a surplus, copper producers will have to increase their production by 2 million tons a year through 2025 to maintain current production, chief executive officer of the copper unit at Rio Tinto (NYSE: RIO) said to Bloomberg.

To do this, Rio Tinto has tried to expand its Oyu Tolgoi copper mine. The project has been delayed though because of a few issues, including funding. It’s now waiting on the government to proceed.

As you can see, increases in production are not looking as positive as demand. And for you, that's a good thing. A high demand and a low supply is the perfect recipe for high prices.

Right now, you can benefit from copper prices being so depressed. Remember, they have hit a recent low. And with China about to increase demand and suppliers slowing down, copper is poised to start heading up.

One thing to watch is the Federal Reserve as it starts to consider tapering the stimulus. While many experts believe this won’t happen until March, there is still some worry over it happening much sooner, such as this month or next.

If the Fed tapers, the dollar may become stronger. This may affect copper prices slightly. However, the taper will be slow, which means the effects of it will be small at first. There’s plenty of time to cash in on rising copper prices before they start to be affected by the Fed’s tapering.

Some investors are starting to look at mining stocks such as Cliff Natural Resources Inc. (NYSE: CLF) and Freeport-McMoRan Copper & Gold Inc. (NYSE: FCX). They are going to have to increase production through 2014 and many years afterwards to meet demands, so they will end up making money from the increase.

The good news is you can nab these stocks and others at a low price right now because of the pullback in the last year or so. As the mines rev up production to make up for the misses in demand, you may just see a nice return coming in.

It’s been a depressing year for copper, but the metal is poised to make a comeback in 2014.