What's Going on at Tesla?

So far, 2019 has been a very schizophrenic year at the world's biggest electric vehicle maker.

Starting in January, the first of a series of announcements publicly stated the company's intent to lower prices on its entire line.

Just weeks later, along with a reshuffling of its model designations, Tesla announced another round of price cuts.

Things really got interesting in late February when the company announced that it would be closing the lion's share of its retail locations and dismissing the bulk of its sales staff in order to transition over to online sales — presumably leading to even more price reductions.

Less than two weeks after that, the company pulled a 180 and announced that its retail locations would remain open and that its product prices wouldn't be reduced at all.

In fact, all four of the company's current models, the S, the 3, the X, and the Y (yes, that spells S3XY, for those following along, and no, it didn't happen by accident), would be going up in price by an average of 3%.

That puts the company's newest line, the Y, unveiled earlier this month, up for a price hike just days after going on the market.

Who's Driving This Bus?

It's not often that you see this sort of beheaded chicken-like behavior from a company valued at nearly $50 billion.

And this back-and-forth, up-and-down, side-to-side mentality has had predictable effects for the investment community.

Nothing that Tesla (NASDAQ: TSLA) has done lately — not the price change announcements or even the release of the company's second SUV — has managed to give the share price a bump into the next level.

Or, in this case, back to previous highs. 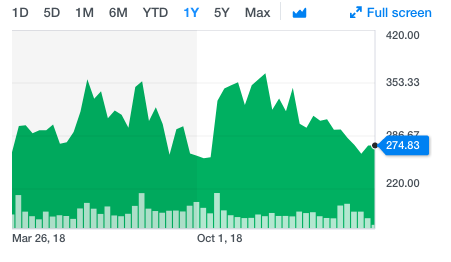 Which begs the question: What is going on at Tesla?

It's become common knowledge that Elon Musk isn't exactly what you would call mentally stable.

That much is clear to anybody who's spent any amount of time on his Twitter feed, where he diagnosed himself as bipolar; turned a garden torch into a promotional gift; posted pictures of himself smoking weed; and made off-the-cuff comments about future (unsubstantiated) plans to take the company private.

He's an eccentric billionaire who hasn't been anchored to reality in decades, a fact that's not outweighed by any amount of intellect he may possess.

But the big question is: Is his personal behavior the product of an overactive mind (remember, he's got SpaceX to think about, too), or is it the product of too much stress?

One particular theory has been gaining steam in recent months, and it's not something shareholders are going to like.

Nevertheless, they deserve to know.

What You Don't Know Can Hurt You

There's a good chance that Elon is stressing out from facing the reality that at the heart of his biggest, most successful business venture is a fundamental flaw that just might sink the company in the next couple years.

The problem isn't the idea of the electric vehicle itself.

As an industrial trend, the EV has plenty of validity and will likely, almost definitely, become the standard of the future.

The same goes for the company's line of distributed energy storage solutions, the Powerwall.

The fundamental ideas behind both are sound, revolutionary, and will become commonplace in the coming decades.

The issue with both the cars and the Powerwalls is that they are, for lack of a better term, already obsolete.

These little-known but nonetheless deadly flaws, affecting the electric motors and the batteries that power them, have the potential to destroy the company from within, rendering its gigafactories useless even before coming online.

But what are these flaws, and if they're so profound, why haven't they been addressed yet?

The problems have been universal, both for electric motors and for rechargeable batteries, since the very advent of the technologies.

For electric motors, the problem goes back nearly 200 years, to the very first prototypes created by Michael Faraday.

The issues are a technical nightmare to solve but are fairly easy to understand.

Electrical motors only function at peak efficiency at one preset speed. Run them above or below this optimal speed, and efficiency drops like a rock.

And because electrical generators are essentially electrical motors working in reverse, the exact same issue plagues power production across the globe.

In the case of the batteries, the issue is cell fatigue rates.

Up until now, there simply has been no way to accurately predict and respond to natural wear and tear on a molecular level.

The result is that modern rechargeable battery arrays, like the kind powering every electric vehicle in existence, age and fail at highly varying rates, regardless of usage patterns.

This makes resale of used electric vehicles a potential hornet's nest. It also makes catastrophic malfunctions, like the kind that wind up turning shiny Teslas into bonfires, more and more common with each passing year.

Up until quite recently, these flaws haven't exactly been flaws. They've been natural characteristics of the technology.

We've accepted and dealt with them as inevitable drawbacks to otherwise beneficial innovations.

They only became flaws when a company other than Tesla itself came up with a solution.

Maybe it's only a coincidence that Elon's own erratic behavior went into high gear at the exact time the solutions to these age-old problems came into being.

On the Other Hand... Maybe it's Not

In the past, when revolutionary new technologies have threatened the status quo, Tesla has taken the pragmatic route and simply purchased them.

It happened just weeks ago, when Tesla bought out California-based battery maker Maxwell at a 56% premium to market price.

Will the same fate befall a company whose electric motors and battery technology make the heart of every Tesla product obsolete?

I can speculate on that, but instead, I'm offering you a chance to make up your own mind.

To get the full low-down on this company, click here to access my recently released video presentation.

You'll get all the information you need, including the stock ticker (yes, it's trading already).

But don't dawdle. This video has been getting a lot of attention from our readers, and I don't know how much longer I can keep it online for open access.