What Is the Real Purpose Behind Musk's Mysterious New Factory?

The question has been posed before, in jest, by late-night talk show host Stephen Colbert all the way back in 2015. But these days, it seems less and less like a joke.

Two years ago, he launched his own personal Tesla Roadster into space as part of a demonstration of SpaceX's new heavy-lift launch vehicle, the Falcon Heavy.

Today, he's in the process of multiplying the total number of artificial satellites orbiting the Earth by a factor of 15.

Below is a photograph of just a tiny sampling of what might be coming to a nighttime sky near you in just the next couple years, courtesy of Elon.

In 2022, he's set to launch the world's biggest spaceship ever, with the capability to put 100 people in space... and take them all the way to Mars.

That ship looks like something out of a 1930s comic book. 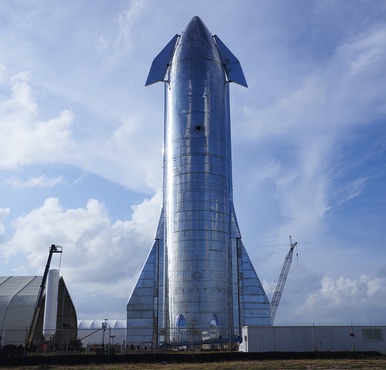 And right now, news of a new, mysterious Tesla factory is making waves through the mainstream media.

Why Is the World's Biggest Attention Seeker Keeping a Massive Secret?

Codenamed "Roadrunner," it is currently under construction on the former site of the “tera battery manufacturing facility.”

On its own, none of that is strange. Musk has been building massive production facilities for years. What is strange is that this one will be consuming an absolutely staggering amount of electrical energy.

According to official documentation, this new plant will require 92,800 megawatt hours per year (MWh/yr) to run — an increase of 72,800 MWh/yr (364%) from the facility it's replacing.

To put things into perspective for you: That's about the amount of energy it takes to run 8,600 average American households.

Other known facts: There will be 400 people employed there, working in shifts around the clock, meaning that the total number of workers on site at any one time will be around 100.

Not a lot of human labor for all that energy consumed leads to the obvious conclusion that this plant will be heavily automated.

Still, that leaves the question of exactly what Tesla's employees, human and robotic, will be spending so much time and energy building.

Will it be more batteries? We know the demand for Tesla's automotive battery arrays as well as for its Powerwall distributed energy storage units is almost impossible to satisfy.

That seems a likely answer, but it begs another question: Why all the secrecy? Musk has never been one to keep the facts about his achievements far from the public ear.

Putting all the knowns and unknowns together, I have somewhat of a different theory.

Now, this is purely a theory, mind you; but it's a theory compiled from years of studying the man, the company and its products, and most importantly, the evolution of the market.

You see, Tesla's cars, successful as they are with consumers, all have a dirty little secret.

Despite the abundant performance they deliver, Tesla's electrical motors all share a common flaw.

Now, before you go selling off your Tesla stock, let me be clear: This isn't a problem that's isolated to Tesla products or even to electric vehicles.

Up until pretty recently, every electric motor in existence shared that exact flaw. It's a fundamental design limitation, built into the motors' DNA.

This limitation isn't a secret. It's not news. In fact, it's been with the electric motor for nearly 200 years — since its very advent by the 19th-century British scientist and inventor Michael Faraday.

The limitation is a natural byproduct of the way the electric coil inside every motor operates.

Here's the problem in a nutshell: Traditional electric motors can only function at peak efficiency at one set speed. Go above or below that speed, and power drops off.

And with a drop in efficiency comes an increase in resistance, which leads to increased wear and tear, shortened service life, and an increased likelihood of failure.

This was the unavoidable nature of all electric motors — something that the industries which rely on them and the end-users who buy them were all perfectly willing to live with.

A very 21st-century solution, involving artificial intelligence algorithms and the super-precise management of current flowing into the coil, finally addressed this 19th-century problem.

AI in Every Copper Coil

Electric motors equipped with this new technology immediately saw a substantial increase in torque at all engine speeds as well as corresponding increases in efficiency and service life.

As much as he may have wanted to, neither Musk, nor any of his companies, could lay claim to this invention.

Those patents belong to a small, almost-unknown young tech company operating out of British Columbia, Canada.

But the implications for Musk's biggest asset, Tesla Motors, was nonetheless substantial.

It basically means that unless he retools his production lines, his motors, and by extension every car that rolls out of his factories, will be obsolete before it's delivered to its proud new owner.

They Consume Half the Energy Produced by Humanity

Well, it's more than that... It's pretty terrifying to the rapidly expanding EV industry, not to mention dozens of other sectors that heavily rely on electric motors.

Maybe terrifying enough to warrant the construction of a whole new factory with unprecedented power requirements?

But what isn't a theory is the technology.

The company behind this revolutionary new tech is already licensing it for installation in a growing list of consumer and commercial products.

It's already finding its way into electric bikes and electric boats. Pretty soon, high-speed trains and wind turbines will be added to that list.

Eventually, it will completely replace the aging, two-century-old Faraday motors.

There's much more to this story. It's been one of the best kept secrets in tech for the last few years, but now, that secret is starting to leak out.

Over the last six weeks, share prices of this company have climbed as much as 300%.