Some rather positive news came out of the January jobs report released last Friday, which have changed many minds regarding the commencement of the much debated interest rate normalization process.

But you won’t find these upbeat numbers in the headlines, nor in the first few paragraphs of the countless articles covering last week’s report. Two particularly juicy data points are somewhat buried a little deeper in the report, and require some digging around to unearth.

Before we get to them, let’s get past the headlines first.

The Two Most Watched Numbers

Right off the bat, all eyeballs jump to the number of new non-farm jobs created; in this case +257,000 for the month of January. Incidentally, these jobs are separate from farming jobs, since agriculture tends to hire a great deal of temporary workers seasonally, with wild swings in farming payrolls throughout the year.

Where does last month’s new non-farming jobs number fit into the grander scheme of things? Actually, it turns out to be not that great, landing right in the middle of the last 12 months, with 5 months below it and 6 months above it, or just a tad below the annual average of +267,666. But looking back over the past six years since the economic crisis of 2008-09, January’s new non-farming jobs number is really quite nice, well above the five-year monthly average near 200,000.

Another top priority number everyone looks for right away is the unemployment rate, which was 5.7% in January.

Where does this sit on the charts? At a very good spot, in fact, as the second lowest unemployment rate since the middle of 2008 in the midst of the economic crisis that ultimately saw the rate rise as high as 10% by the end of 2009. We’ve come a long way since then, nearly cutting the rate in half. 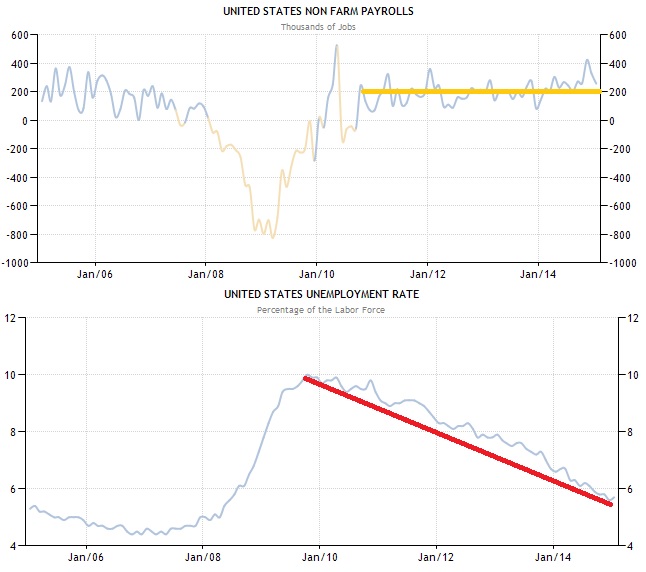 While both of these metrics – the steadily rising new nonfarm jobs and the steadily falling unemployment rate – have been really quite encouraging for several years, the Federal Reserve has remained reluctant to change its stance on interest rates, keeping them down near zero still after more than five years. Why? Because of two other metrics which have been rather dismal all this time.

Two Other Figures Holding the Fed Back

Leading up to last week’s January labor report, average hourly non-farming wages in the U.S. had fallen from an average monthly increase of roughly +20 cents to some +15 cents, as shown in yellow below.

Such stubbornly slow wage growth weighed very heavily on the inflation rate straight across the economy, and was largely responsible for keeping inflation tightly contained between 1% and 2%, averaging roughly 1.5% annually since mid-2012, as noted in red below.

Unless wages rose more robustly, inflation would remain stuck as well, since the average American would not be able to afford higher prices on such sluggish wage raises. 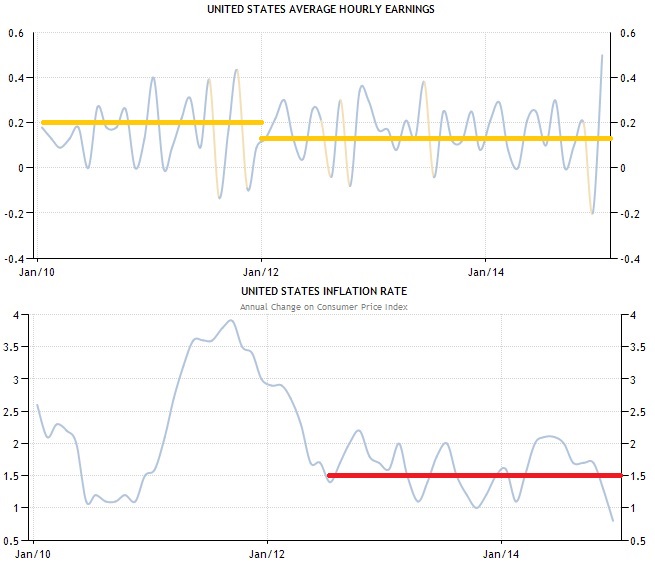 One reason why wages had been rising so slowly was because the labor force was so large, with the number of unemployed persons reaching as high as 15 million in late-2009. And although that number has been steadily declining since then, it is still currently sitting just shy of 9 million. With so many people looking for work, employers did not need to raise wages to fill their vacancies.

Hence, although jobs were being created at a very steady rate averaging 200,000 per month since 2010, wage growth actually slowed given the oversupply of unemployed workers, preventing inflation from taking hold.

But the lack of meaningful wage growth did more than just prevent inflation from moving up, it also prevented the Fed from moving interest rates up. Remember that one of the Fed’s two mandates is to maintain “price stability” by keeping prices on an upward slope of 2% per year. With inflation averaging just 1.5% per year, the Fed’s hands were tied regarding interest rates.

But things may have begun to change…

Since the non-farm payrolls have been growing steadily for years, and the unemployment rate has been declining for years, the only thing the Fed was waiting for was a rise in wages. That third and final green light may have finally arrived:

That explains the sharp spike upward we see in the graph above, as average non-farming wages increased a whopping 5 cents per hour - the highest increase of any month and the only 5 cent increase since the 2008 crisis.

Better still is the annual increase in wages of 2.2% since the previous January. Why is that even better? Because it’s well above the inflation rate of 0.8% recorded in December, and it’s also above the Fed’s target of 2% annual growth.

There is yet one other improved metric that increases the chance of the Fed changing its mind, and that is an increase in the labor participation rate by 0.2% up to 62.9%. This is the percentage of the adult population that is currently either employed or actively seeking employment, those who are considered part of the available workforce.

Though January’s figure of 62.9% is only one twentieth of a percent above the 12-month average of 62.85%, as noted in yellow below, it does look like it is putting in a bottom after having been in decline since 2007, as also noted below.

Why might this add to the likelihood of the Fed changing its mind? Because more people working means more people earning paychecks, which pumps more money into the economy, which ultimately fuels prices higher. Again we get down to that all important rise in inflation for which the Fed has been waiting all these years. 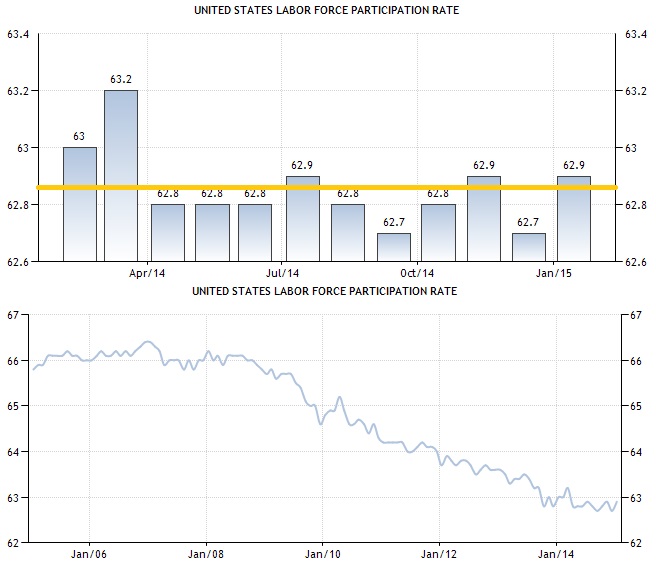 So what does all of this mean for investors? As the stock markets have been showing us since Friday’s report, the latest jobs data point to a possible new phase in the economic recovery – one that is characterized by rising wages and a rising participation rate, both of which have been absent since the recovery began.

Traders are taking this as meaning that the economy is continuing to move back to its normal self again, without so much parental supervision required by the Federal Reserve going forward. It means that Fed is just a little closer to stepping back into the background, which gives the markets a new-found sense of independence. Of course, the Fed still needs to see several more solid jobs reports over the coming months before it feels confident enough with the economy’s strength to start raising interest rates.

Perhaps last week’s report serves as the first sunbeam in the dawning of a new day in America’s economy. The sun appears to be rising, encouraging investors to get on out there and buy themselves a share of what looks like the start of a new economic age in America.