Tomorrow’s Fortunes Will Be Made TODAY

Greetings and welcome back to the week!

I hope you had a good weekend and got some time to relax and forget how terrible everything is out there.

But the thing is that we’ve been here before. And things always start looking their absolute worst before they start to get better.

Which brings me to the point I came here to make today. And that’s this...

Tomorrow’s fortunes won’t be made tomorrow. They’ll be made today. And they’ll be made by people who put their emotions aside and take risks while everyone else is too scared.

I say this mainly because I want you to be one of those people.

I want you to set your fears aside and be bold.

I want you to make the investments today that will translate into a fortune tomorrow.

But I also say it because I’m seeing those exact investments start to pile up on my desk.

You see, I don’t only invest in the stock market. I like to diversify my holdings.

So I invest in what are known as “alternative investments” as well.

It includes real estate, debt, and direct investments in private companies, to name a few assets.

And what I’m seeing now is the same thing I see every time we go through tough economic times and a market crash.

I’m seeing a lot of companies that were ready to go public push those plans back.

And who can blame them? Who wants to go public into a market that’s tanking?

But those companies that had plans to go public and are now waiting for a better time also had plans to spend the money going public would have generated for them.

And they need to keep growing in the meantime. So just because they’re not going public doesn’t mean they won’t need that money.

That’s leading to a lot of opportunities to invest in private companies that are already well-established.

And that’s the closest thing you can get to a guarantee of a profitable exit in any market.

Because, historically speaking, the few years after our markets come out of a recession are the absolute biggest for IPOs. 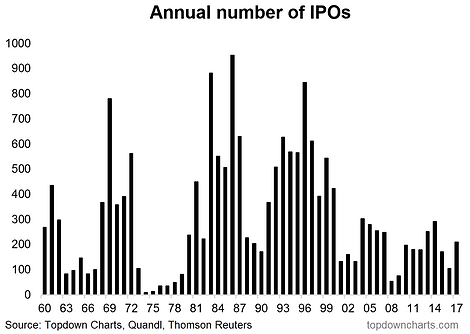 Which makes sense if you think about it…

All the companies that missed the window before the recession and held off on listing during it are going to jump at the opportunity to get out there as soon as it’s over.

And that, my friends, puts us in a very lucrative position…

Opening the Doors of Profit

You see, last time the country went into a deep recession like the one that’s facing us today, there was a law that literally forbade anyone who wasn’t already rich from investing in these private companies.

So the last time an opportunity to secure massive private market profits came about, the only people who benefited were already millionaires.

But this time, it’s different. And it really is…

Because this time, those private markets that just got so incredibly lucrative for investors are open to EVERYONE!

Thanks to a line or two of legalese slipped into the Jumpstart Our Businesses and Startups (JOBS) Act, those previously off-limits markets are now open to any investor with an internet connection and a pulse.

And when I say “lucrative,” I really mean it. According to research firm McKinsey, private investment profits have outpaced those in the public markets and experienced less volatility at the same time.

In fact, over the past 15 years, private equity notched 14% annualized returns, while venture capital returned about 15% and angel investors took home 25%.

It’s just not even the same ballgame!

And as those IPOs heat up, those average gains are likely to heat up right along with them.

Your Chance at MILLIONS

So now we get to the real point of today’s missive: I want to help you pick out the best private investment opportunities.

You see, I’ve been investing in this market for years myself.

And I built a huge network of venture capitalists, angel investors, serial entrepreneurs, and private equity offices during my time on Wall Street.

That’s why I’ve noticed the uptick in private deals from late-stage companies: My network has been calling me daily with new opportunities.

These are companies that were literally on the verge of an IPO as the stock markets started to tank.

They’re late-stage, profitable in many cases, and severely undervalued.

And when the timing is better and the stage is set for a resurgence of IPOs, they’re going to be among the first to list shares and get their investors a profitable exit.

I want you to know the exhilaration of selling shares INTO an IPO instead of buying them from one.

And I’ve got a hunch (and history says it’s right) that we’re going to get a lot of IPOs hitting the market and making investors rich in the next year or so.

So, to help you take advantage, I've put my top two private investments prepped to IPO into a special report.

If you want a piece of that action, you’re going to have to make those investments now, though.

Remember, this whole thing started with me telling you that the fortunes of tomorrow will be made today.

And these private investments are exactly what I’m talking about.

Investors who help these private firms get through the next few months are going to be greatly rewarded on the other side.

Will you join me and my community of pre-IPO investors and be one of them?

As always, the choice is yours.