The market is in flux.

Here is the Russell 2000, the index of small cap stocks.

Historically, small caps have led the market both up and down... 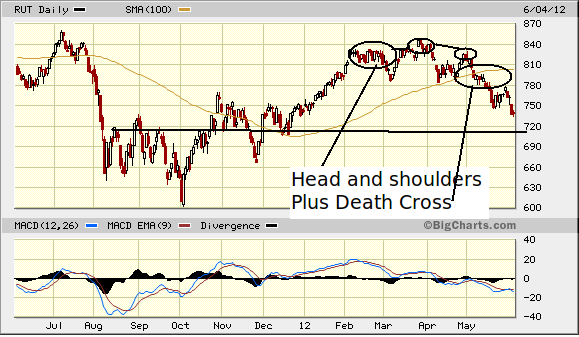 Both of these are bearish patterns — and were proven correct in this case. There is more support at 710, but we have yet to get there.

The DJIA, NASDAQ, DAX, Shanghai, and most other major markets are acting in a similar fashion... but as they say, “There is always a bull market somewhere.”

Last week I made the bullish argument to buy silver. This week I'll give you a safe haven to put your money so you can sleep at night.

The biggest change in the world today isn't Greece or the employment number. It's the price of oil.

Agricultural stocks have also taken a big hit. The Agribusiness ETF (MOO) is down about 16% in the past two months.

This sets up those companies that have commodities for a cost center.

To get some ideas on who will benefit, let's see what stocks are hitting new 52-week highs today...

We have the normal mix of one-off biotechs like Medtox Scientific (MTOX), iPhone-driven rumor stocks like Vringo (VRNG) and AuthenTec (AUTH), as well as buyouts like Market Leader Inc. (LEDR) and lawsuit settlements.

Don't get me wrong; I love these types of “gap-up” trades.

But they tend to be small caps that are hitting new highs based on one-time events.

The trick to playing these stocks is to buy the rumor and sell the news. The smart money bought these stocks months ago. They are dropping them into the news-driven frenzy today.

What we are looking for is organic change — bellwethers, if you will — and one stock sticks out: Duke Energy Corp (DUK). 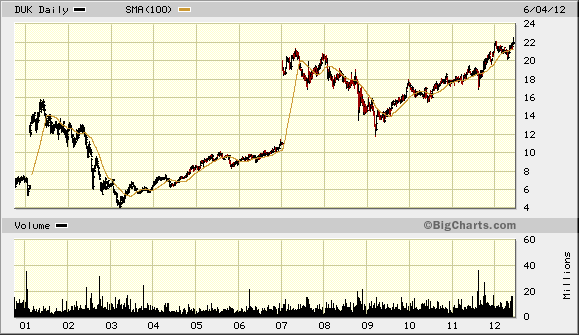 Oil is dropping in price. Natural gas and coal are dirt cheap. Plus, rates are going up in states like North Carolina.

This covers the new manufacturing hub of the United States and is littered with auto manufacturing such as BMW's plant in Spartanburg, South Carolina.

This means higher demand for electricity.

Duke is currently merging with Progress Energy, Inc., which will make it the largest U.S. utility provider with more than 7.1 million customers. This merger will go through on July 8, 2012.

Despite the decade-long whipsaw in stocks, if you had held for the last ten years, $100,000 would have turned into $165k — and that's if you didn't reinvest the dividend.

Today Duke pays out a 4.5% dividend and has a five-year dividend average of 5.3%.

That's a dividend that beats the heck out of the ten-year T-Bill, which is sitting at all-time lows.

The company has a modest debt-to-capitalization ratio of 44% and sits on $2.1 billion in cash.

If you are looking for a safe place to hide while the world comes apart at the seams...

If you don't care about Greek unions or Chinese slowdowns...

Then Duke Energy is for you.

Be safe and prosper,