What This Contrarian Indicator Is Telling Us Now

Don't look now, but the administration that swore it was ignoring the daily gyrations of the stocks markets has suddenly turned bullish.

While Wall Street tumbled earlier in the week, President Obama remarked, "What you're now seeing is profit-and-earning ratios are starting to get to the point where buying stocks is a potentially good deal if you've got a long-term perspective on it."

And while the long-term view has been the bedrock pitch of fund managers everywhere for decades now, the market simply wasn't buying it—even from the new President.

In fact, since the new administration grabbed the wheel of this burning bus, the S&P 500 has dropped another 15% for a total decline of 52% over the last 52 weeks.

Hope, it seems, has turned back into fear.

That has every trader on Wall Street fixated on the VIX fear gauge as a window into the market's next move.

You see, the VIX is one of the so-called contrarian indicators. That is, it tells you whether or not the markets have reached an  extremely high level of fear. If so, that tends to be a sure sign the markets are about to stage a reversal.

The idea here is if the wide majority of traders believe the world is coming to an end, the market is usually ready to turn the other way.

Of course, "the crowd" hardly ever gets it right. (So much for the rational market theory.) So, the smart money simply uses the VIX indicator as a sign to bet against them all.

There is only one small problem with this time-tested strategy... But, first, it's important to understand how the VIX works because, in a sense, we're not in Kansas anymore.

So, What Is the VIX Indicator?

Developed by the Chicago Board Options Exchange in 1993, the CBOE Volatility Index (Chicago Options: ^VIX) is one of the Street's most widely accepted methods of gauging stock market volatility.

Using short-term near-the-money call and put options, the index measures the implied volatility of S&P 500 index options over the next 30 day period.

But because it is basically a derivative of a derivative, it acts more like a market thermometer than anything else.

And like a thermometer, there are specific numbers that tell the market's story.

A level below 20 is generally considered to be bearish, indicating that investors have become overly complacent. Meanwhile, a reading of greater than 30 implies a high level of investor fear, which is bullish from a contrarian point of view.

In fact, the old saying with the VIX is, "When the VIX is high, it's time to buy." That's because when volatility is high and rising, it means the crowd is scared. And when the crowd is scared they sell, and stock prices fall dramatically, leaving bargains for money-making traders.

What the VIX "Fear Gauge" Is Telling Us Now

Unfortunately, given the depth and breadth of the current bear market, what has worked in the past with the VIX indicator has been largely tossed out the window.

That's because the combined forces of the credit contraction and the economic downturn have pushed the fear levels well beyond those time-worn figures.

In fact, at the height of the market meltdowns in October 1998 and August 2002, the VIX failed to go above 50. However, in today's tumultuous markets, the VIX routinely trades above 50, while a reading of 30 would be something of a welcome sight. 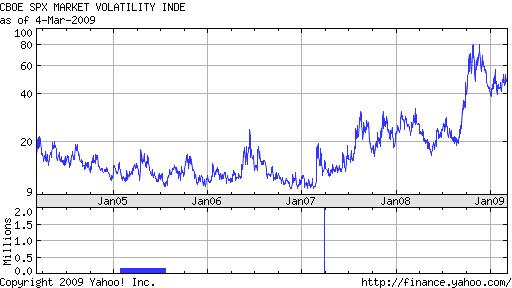 As you can see, the old 20-30 routine has been left completely in the dust. So as a market thermometer, the VIX readings of old have lost their meaning completely.

Instead, what the current readings on the VIX are telling us is something that's not exactly news: that this current crisis is like nothing the markets have ever seen before, especially when compared to more recent experiences. As the markets go "off the charts," so has the VIX indicator.

As a result, options investors are essentially paying twice the ten-year average on the VIX to insure stocks against losses well into the future.

In fact, according to Bloomberg, "Contracts to protect against a decline in the Standard & Poor's 500 Index for two years cost $15,160 on the Chicago Board Options Exchange at the end of last week, compared with $6,875 in 2007."

That's a signal that investors in these contracts see the current bear market extending into 2011.

"There's a real panic in the markets, with some people wanting to buy long-term insurance at any price," fund manager Peter Sorrentino told Bloomberg. "People have lost hope."

So, while President Obama now believes that stocks have become cheap, the options activity in puts has headed in the opposite direction.

The key, of course, will be watching to see if and when the VIX returns to "normal." That will be a clue that investor confidence has finally been restored.

Until then, it looks like this bear market still has some room the downside.

P.S. With the economic stimulus package now part of the rescue plan, The Wealth Advisory's team has already identified two stocks set to soar—no matter what happens to the rest of the market.

In fact, these two industry leaders stand to reap a big portion of the profits as new "green energy" mandates add over $100 billion to energy infrastructure investments over the next few years. We'll be releasing these two new trades, along with our full analysis, in the coming weeks. To learn more about The Wealth Advisory click here.