The Torches Come Out in Iceland

Protests break out in Iceland over bank bailouts

$5b almost seems like an insignificant amount these days. But to a tiny country like Iceland, it's a ton — 13,000 euros per capita, to be exact.

Icelandic lawmakers have proposed the public cough up $5b to pay back England and Holland, to make up for the failed bank IceSave. English and Dutch depositors lost money when the banks failed, and their respective governments compensated those individuals.

Iceland originally agreed to pay those governments back, but the public is strongly opposed to the bailout. Why should the country as a whole pay for the recklessness of a few (you could say this is a recurring theme worldwide)?

Due to extreme backlash, the President of Iceland has so far refused to sign the bailout bill into law. The U.K and Netherlands aren't happy, but the already hurting Icelandic public are breathing a sigh of relief.

The pictures below are from one of the protests that lead the President to veto the bill. Remember all that talk about torches and pitchforks? Well, Iceland went ahead and broke out the torches (ok - they're flares, technically): 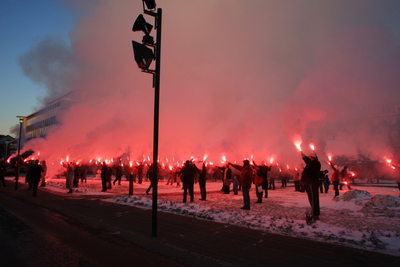 More on the political situation from Spiegel.de:

On Tuesday, however, President Grimsson announced he had refused to sign a law to enable the repayment. It has cast his country into what seems to be a full-blown constitutional crisis, since both the nation's parliament and the rest of its government had already approved the repayment plan.

Under Icelandic law, the president is required to sign all legislation approved by parliament. Refusals to do so are extremely rare. President Grimsson, who is now serving a fourth term in the office he has held since 1996, last did so in 2004 when he refused to approve a new media law.

In the last few days, the president had said he needed more time to come to a final decision on the repayment bill, which had passed through parliament last Wednesday with a slim 33-30 majority. The government had reached a deal with Britain and the Netherlands in June to repay the lost savings, but it required parliamentary approval.

On Dec. 31, 52,000 Icelanders presented him with a petition protesting the law. By Tuesday afternoon, that number had grown to 62,282, representing close to a quarter of the island nation's entire population.

Prime Minister Johanna Sigurdardottir, who threatened to step down if parliament did not approve the repayment bill, has been left with two options. She can either withdraw the bill or call for a public referendum on the matter.