The Spark That Will Ignite the Revolution in 2022

As promised last week, I’m back with more coverage of the robot revolution that’s about to completely transform the way work gets done.

And today, also as promised, I’m going to explain why I’m convinced we’re going to see that revolution accelerate faster than anyone expected in 2022…

Show Me the Money!

Over the past few years, we’ve started to see more and more robots creep their way into our daily lives.

And as the push for a mandatory minimum wage of $15 or more gathered steam, we started to see a lot more of them.

Companies like McDonald's, in the face of collective demands that it increase its pay, did what you’d expect. It raised the wages of its employees.

But it also cut back on the size of its workforce, as you might also have expected (in the face of massive increases to its labor costs).

Instead of six or eight people waiting to take your order and cook your burgers, there were now two or three people and a bank of touchscreen displays where you could place that order.

Now, McDonald's didn’t do this because it’s some terrible heartless corporation. It didn’t want to reduce the use of humans in the workforce.

But it’s a business, and the point of a business is to make a profit for its shareholders.

And since McDonald's can’t call up its suppliers and explain that it won’t be paying full price for all that beef anymore because people expect to make a living by asking, “Would you like fries with that?”…

It really didn’t have much choice but to reduce its workforce so it could cover the extra cost of paying people that $15 an hour they were clamoring for.

Just as a side note: I had to get a degree in finance and economics before I made the equivalent of $15 an hour. But I digress.

The decision worked out well for companies like McDonald’s. The robot workers never call out sick or start a fight with customers. They also don’t take breaks or ask for raises.

And that’s more to my point here. Robots made a big push into our lives because they’re cheaper and more efficient than their human counterparts.

They also got a little help making that move from ideas being pushed by politicians.

How Dare You Profit?!

That situation I’m seeing is our “brilliant leadership” in D.C. pulling in oil executives to demand they explain why Americans are paying so much for gasoline at the pump.

I know it doesn’t seem like that’s related to robots at all, but bear with me. Because it most certainly is.

You see, oil prices are high because there’s a disconnect in the markets. Demand has risen but supply has not risen as much.

It’s basic economics. They used to teach it in high school. They probably still should. Because it’s obvious none of our politicians have ever heard of it.

The irony of the party in power calling all these CEOs in to testify is that the reason production hasn’t grown is because oil companies have shareholders who don’t want them to produce oil now.

And why is that, you may ask? Well, part of it has got to have something to do with the 20-some years’ worth of rhetoric flowing from D.C. about how bad oil is for the planet and how oil companies need to be punished.

Now there are a bunch of activist shareholders and board members pushing oil companies to stop producing oil.

And when those politicians who hated oil so much up until a few months ago really need that oil, the oil companies aren’t drilling or pumping more because the shareholders make those decisions.

And the shareholders don't want them to invest in oil production anymore.

So why are oil prices so high? It’s not because Exxon and Shell are gouging you at the pump.

It’s got a lot to do with the people calling their executives to testify, though.

And that, my friend, is where this all comes back to robots…

That’s because, as I’m sure you’ve noticed when you head out to the grocery store, gasoline isn’t the only thing denting our wallets this year.

Everything costs more than it did even a year back. And with inflation running hotter than it has in my lifetime, you better believe those prices are going up more in the future.

Do you really think they’re not going to do that with every other company that makes a product we can’t afford anymore?

In the words of Joe Brandon Biden, “C’mon, man.”

They’re going to call every last one of them in and rake them over the coals and call them selfish and greedy and all sorts of other terrible things.

Then they’re going to tell them to find a way to lower prices.

And those companies are going to look at all the costs they have absolutely no control over and the one cost they do, and they’re going to make a tough decision.

There will be mass layoffs as companies do the only thing they can to cut costs: reduce payroll.

Like I said last week, Rosie is willing to work 24 hours a day, seven days a week, 52 weeks a year. And all she asks for is regular maintenance and a $1,000 monthly lease (that even covers the cost of the maintenance).

That’s a pretty far cry from the $15 companies have to pay people just to drop potatoes in the fryer these days.

So when Congress comes calling and demands that companies lower their prices, they’ve got an easy way to reduce the payroll costs by half.

And the robots have another leg up thanks to politicians who lack the ability to think about the big picture.

It Could Happen to You

And I know what you might be thinking: “That could never happen to me because a robot can’t do my job.”

Well, servers at restaurants thought the same thing up until this year. So did the guys who ran the die-casting plants for the automakers back in the 1960s.

So did the people flipping burgers at fast-food joints. And the carpenters that framed your house. 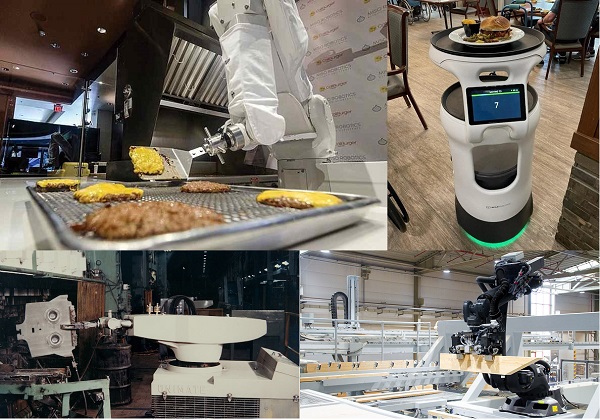 But all of them have been replaced by robots at many of the companies in those industries.

The robots are coming, and they’re coming to take all our jobs. But that's not so bad...

Because we’ve got a “safety net” to make sure that even if robots do take our jobs, we’ll still be able to take care of our families.

The Best Offense Is a Good Defense

Our defense against the robot revolution hurting us in the pocketbook is a steady and growing income stream called “Robot Royalties.”

It takes advantage of all the cost savings companies experience when they hire robots. And it lumps a portion of that cash off to be distributed to participants.

It's kind of like having a way to get paid every time a robot takes a person's job or even performs a task for its operator.

It sounds a little crazy, but it’s 100% real and the income stream you can generate is pretty phenomenal.

I’ve already taken a lot of your time to talk about the catalysts coalescing to accelerate the revolution today, though.

So I’m going to attach a report all about “Robot Royalties” here so that you can read it at your leisure.

Just don’t wait too long. These payouts are real, they’re growing, and the next one is coming soon.

Trust me. You don’t want to miss out on any more, whether you think a robot’s coming for your job or not.

So take some time right now and learn how to start collecting your “Robot Royalties” TODAY.