The "Model T" of the Ammonia Fuel Era

Killer tech is nothing more than a historical footnote without a killer application.

It's what personal computing did for microprocessors. It's what serialized programming did for television. It's what the automobile did for the internal combustion engine.

Ammonia fuel, if you've been following the story, is now rapidly gaining traction as the heir apparent to fossil fuels for the world's heavy shipping industry.

It's the carbon neutrality, specifically, that has the shipping industry most interested, as current plans have targeted a 50% overall carbon footprint reduction across the sector by midcentury.

Major retailers including Amazon and Ikea have raised the stakes by targeting a zero carbon footprint by 2040 for their own shipping fleets.

But up until now, all of this campaigning and planning has not yielded any tangible results.

Well, that ends today, as we get our first look of what will be the "Model T" of the ammonia era. 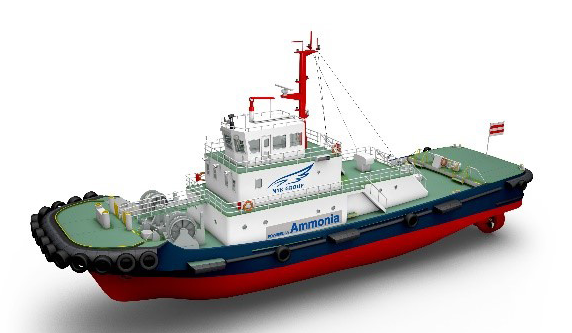 It's not a car, of course, but a vessel. Specifically, a tugboat. Simple, utilitarian, and ubiquitous, these tugboats will serve as an ad hoc pilot program for a massive industrial transformation.

In less than a decade, similar propulsion systems will replace current marine diesel power plants in many of the world's biggest ocean-going vessels.

But this transformation won't end in the maritime sphere.

Ammonia's benefits make as much sense on the ground as they do in the water.

Considering the amount of infrastructure that will be required to completely retool the world's roads and filling stations to provide sufficient charging stations for hundreds of millions of new EVs, ammonia's greatest effects may indeed be felt in the automotive market.

That's even before you consider the charging problem itself — namely the current inability to fully charge a battery in a period of time approaching that of a standard gas fill-up.

With ammonia fuel, you can fill your existing car up with a new fuel at an existing station and be on your way.

If you could do that and stay carbon neutral, why even bother with that shiny new Tesla in the first place?

The obvious question in your mind right now is probably: If all this is true, why aren't we running the world on ammonia?

You see, traditionally, ammonia as a fuel has been a non-starter because producing it was a costly, dirty process.

Today, however, ammonia fuel can be created with nothing more than water, air, and electricity, with absolutely no greenhouses gases or toxic byproducts produced in the process.

And there's a company headquartered in Toronto that's got the patent to the technology that makes it all possible.

It's really hard for me to overemphasize the potential importance of this technology. In a decade or two, ammonia could very well be one of the staple fuels of humanity, supplying not just our personal lives, but our industrial and commercial needs as well.

And it will all hinge on clean ammonia production.

Right now this tech is still in testing at the University of Ontario. They are slowly scaling up the size of their production facilities, working out the kinks, and optimizing everything for the ultimate goal: commercialization.

Once that begins, the sky is the limit. There is literally no major sector where an efficient, carbon-neutral fuel source wouldn't make a difference.

We're talking about trillions of dollars' worth of market capitalization that will be directly impacted and tens of trillions that will be influenced indirectly.

The company I mentioned is small and basically unheard-of.

You Won't Hear About It From Your Wealth Manager

That's how these things start. Small. Unnoticed by the retail investors. The insiders, founders, and a couple forward-thinking people will be holding all the shares early on.

Then when the story blows up, it'll be too late and you'll be left reading the headlines. The early shareholders will be cashing out and retiring.

It doesn't have to be this way. Not this time.

Because this company's stock has been trading on two North American exchanges since earlier this year. Things are still quiet, but it's hard to say how much longer that will last.

All you need to make your decision is the ticker symbol and the full back story.

I've put together a video presentation for just that purpose. Get instant access, no registration needed.