And the company that's about to change EVERYTHING

Electric vehicles, or EVs, have a major problem they need to overcome. Well, to be fair, they’ve got a lot of problems to overcome if they ever hope to replace internal combustion-powered vehicles on the global highways.

One of the biggest issues that’s getting about the least amount of coverage, however, is their disposal.

You know from my previous articles that EV batteries have a life span. And it’s a pretty short one compared with how long your average person plans to drive their car.

I’ve pointed out how expensive it is to replace these batteries (up to $7,000 for the cheapest Tesla on the road). But I haven’t talked about the major problem with those dead batteries…

And that’s the fact that they’re ending up in landfills and polluting the planet.

It might surprise you to learn that Arnold Schwarzenegger made a more environmentally conscious decision when he bought a first-generation Humvee than he did when he bought an electric vehicle version a few years back.

But it’s completely true. From the cradle to the grave, a Humvee pollutes less than the very top-of-the-line Tesla. And that’s got a lot to do with what happens to the vehicles after their useful life.

You see, 100% of a Hummer is recyclable. The tires, the rims, the frame, the body panels, the engine, the fuel tank — you name it. Even the batteries are recyclable.

But only a fraction of an EV can be recycled. And the biggest pollutants in them, the batteries, are pretty much unrecyclable and packed full of toxic metals.

Nickel has been shown to cause lung and nasal cancers and bronchitis. Cobalt can cause asthma and pneumonia (and it might be carcinogenic, too). Manganese can cause problems to develop in the lungs and the neurological system.

That’s what the current generation of EV batteries is packed with.

And right now, less than 5% of EV batteries are recycled after they lose the ability to power your car. Most of them are just shipped to developing countries with lower environmental standards. 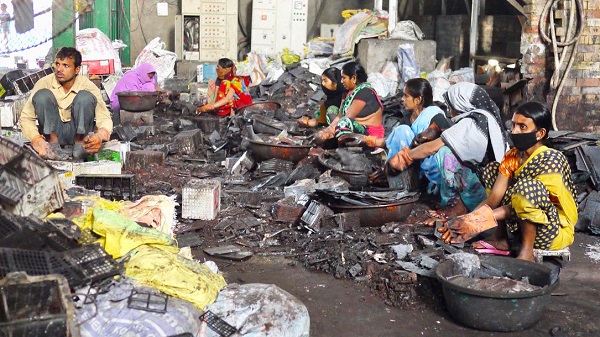 Only two countries have standards in place requiring manufacturers to take back old batteries. The U.S. isn’t one of them, so most of our batteries end up in landfills.

And the recycling process for the less than 5% of the batteries that do get recycled today isn’t really recycling at all.

At least not the way we think of it…

You see, right now the “recycling” process for these batteries involves getting the few high-cost metals out and throwing away the rest.

So about 50% of each battery is actually reused. That’s the cobalt and a few other expensive metals. The rest of it gets released as air emissions or gets added as “filler” in concrete and other construction products.

Air emissions. Think about that for a minute. Isn’t that what we’re trying to avoid by making EVs? Aren’t the emissions from ICEs (internal combustion engines) what’s going to kill us all?

So how does creating more emissions help alleviate that problem? Spoiler alert: It doesn’t!

The majority of the EV batteries we produce today will be leaking out toxic materials in a landfill a few years from now. And that’s not helping make the planet a greener place.

But one company may have just created a solution. Or at least something that will help us get to that real and lasting solution to the EV battery dilemma.

This company hasn’t created a recycling process that can reuse 100% of the batteries. I’m still on the lookout for that.

But what it has created is a battery that could potentially last as long as the car it’s powering. So instead of replacing your battery every few years and likely sending it to the landfill, you’ll be able to keep it in your car until you’re ready for a new car.

Or, if you’re one of the less than 5% of EV owners who manage to recycle your batteries, you won’t watch 50% of it go up in smoke (literally) as the unwanted parts are incinerated.

What it’s given the EV industry is a little extra time to get its act together and figure out how to make these cars actually help the environment instead of hurt it (like they do now).

And as this company's batteries get into more and more consumer vehicles, it’ll help provide a solution to another problem plaguing the battery industry (and especially the recycling of said batteries).

And that problem is the massive differences between all the EV batteries out there. Every battery maker uses different ingredients to make their batteries. They all use different sized and shaped cells and modules, too.

That means there is no standard way to recycle EV batteries. They’re just too different for any company to design one process to recycle them all.

They’re not like aluminum cans, paper, and glass. They’re different from each other on a structural level. And that makes recycling them even more complicated and expensive.

But as this company’s batteries start to power more and more vehicles, that’s going to change. They will become the standard in EV batteries.

And having a standard means processes can be designed to recycle that standard easily and efficiently.

So not only has this company solved many of the problems holding back EVs, but its technology could lead to revolutionary innovations in recycling as well.

And that’s where we really need change if we’re going to save the planet with EVs. Because we’re not doing it by mining up metals and then burying them in landfills a few years later.

Thanks to one small change in the chemical makeup of the lithium-ion battery, this company may have solved all the problems keeping EVs from being a truly viable source of transportation.

It’s extended the batteries' useful life by several years. It’s made them capable of packing far more power into a far smaller space. It’s eliminated the risk that they’ll explode while you’re driving or charging them. It’s even managed to cut the charging time by more than 50%.

And on top of all that, because of this company's partnerships with some of the largest auto manufacturers in the world, its batteries are likely to become the standard for all EVs going forward.

And that means we might finally be able to recycle the biggest source of pollution stemming from the EV market.

If that’s not enough to get you excited, maybe this is: The company’s stock is currently trading around $30 a share, but once its technology makes it from the lab to the factory, I’m predicting it could change hands for as much as $300 a share.

Because as this company’s batteries grow to power the majority of the global EV fleet, the potential investment gains are really limitless.

It’s not incredibly likely, but bigger gains have happened before. And I think the possibility exists for this company to deliver gains like that too.

That’s completely reasonable to expect from a company with a disruptive innovation like this one.

Because I’m so bullish on this company and so excited about the possibilities its technology opens up, I’ve put together a formal presentation on the opportunity:

It’s got all the information you’ll need to make an informed decision yourself. You’ll learn about the roadblocks facing the industry. You’ll hear about the genius inventor behind this revolutionary innovation (and how his inventions have already changed the world not once but twice).

And, most importantly, you’ll learn how you can get invested before the crowd.

It’s pretty brief and I’ve spent a lot of time making sure it’s got only the information you need and nothing more. So I’d appreciate if you took a few minutes from your day and watched it.

But if you’re rushed or if you just don’t have time to watch right now, I’ve also got a written report that’ll give you all the same details.

You can get access to that report by clicking this link.

And you can access the presentation by clicking this one.

Like I said, I’d appreciate if you watch the presentation; my team and I spent a lot of time putting it together for you. But I really just want you to get the information and I don’t really care how.

Or download a copy of my report and give it a read at your leisure.

I just ask that you don’t wait too long to get the details. You see, this company is in an explosive position. And I wouldn’t be surprised to see it shoot up 50% or more in the next few weeks.

That means if you want access to the lion’s share of the profits, you’re going to need to act fast.

So take some time today, watch the presentation (or read the report), and get yourself positioned to ride a wave of profits before someone else is cashing them out.