China is still a growth machine, averaging around 9% GDP lately. But a growing chorus of bears thinks they're cooking the books, and that the whole thing is a huge bubble waiting to pop.

I think Shanghai stocks are a bit pricey here, trading at a P/E of around 30x. So while I consider myself a long-term China bull, it's always good to examine the other side of the argument...

Jim Chanos is probably the best-known China Bear out there. He's one of the few guys who saw the Enron collapse coming, so people tend to listen to his warnings.

He thinks China's economy is only being propped up by massive stimulus spending. He points out that their $900b program represents nearly 1/4 of their $4.3t GDP.

It's also not clear how wisely the money is being spent. In some cases, it looks like it's being flushed down the toilet. The empty city in Inner Mongolia is a good example...

China spent billions to build a huge city in the middle of nowhere. It has a huge luxury mall, Venice-like canals, and thousands of empty houses. You can watch an amazing video about the project here. Some see this type of project as a clear sell signal.

Questions are also being raised about how real China's growth is. For example, official numbers show excellent growth in auto sales. But sales of gas are anemic. Are they fudging the numbers? Chanos suspects they are, and plans to short auto and infrastructure stocks.

A government-controlled economy will always be full of waste and inefficiency — that's the nature of socialist markets. Bureaucrats generally make awful businessmen. With hardly any stake in the outcome, workers inevitably get careless and make bad decisions. Corruption also tends to creep in.

But there are some promising projects taking place in China. And compared to the prospects of developed markets, China is one of the better long-term bets.

Jim Rogers is probably the most well-known China Bull. He dismisses talk that China is a bubble. He recently made a not-so subtle dig at Chanos, saying, "I find it interesting that people who couldn't spell China 10 years ago are now experts on China."

Rogers thinks that selling Chinese stocks today would be like selling American stocks in 1905. I agree. It might be a bumpy ride, but if I had to put money somewhere for the next 10 years, China'd be near the top of the list.

And while some stimulus money is clearly being wasted, some projects look good. One of the more impressive is a $200b high-speed rail network, scheduled to be complete in 10 years.

Efficient public transportation is a no-brainer for China. Combine rising energy costs with 1.3 billion citizens in need of transportation, and you have a socialist's dream-project. If well-executed, it'll provide superior transportation and a lower cost of living for hundreds of millions.

Here's a map of how it'll look like when it's done: 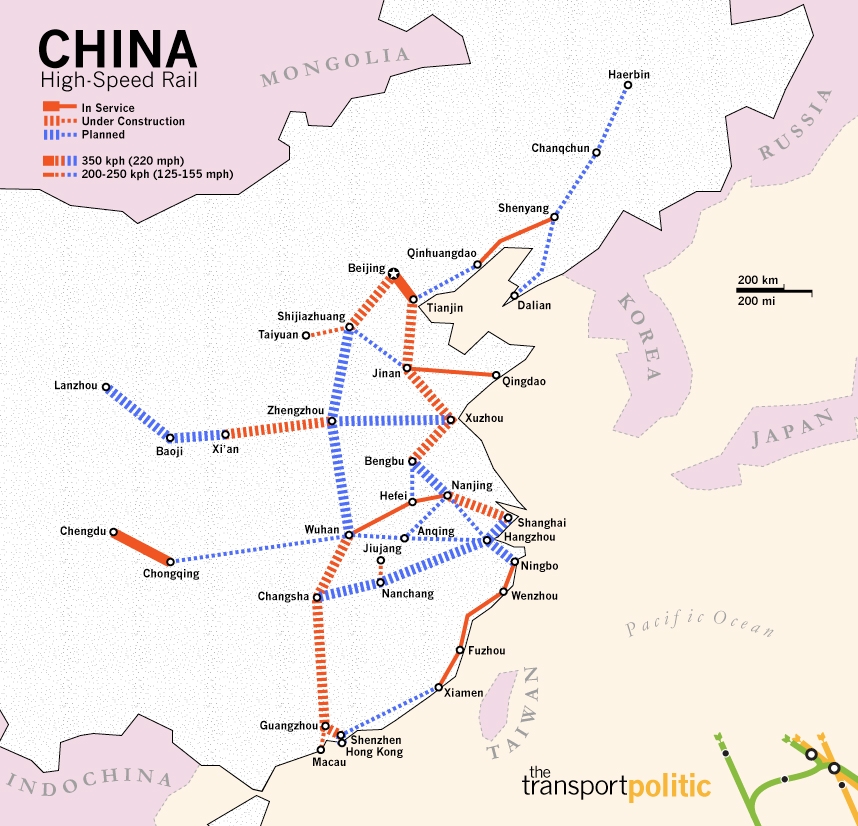 Now consider the fact that the U.S. has spent around $180b bailing out AIG. For about the same price, China will have a huge high-speed rail network in 10 years. I doubt our investment in AIG will look so good.

The China bull case comes down to growth. Even if they're cooking the books a little to hit their goals, it's still growing faster than 90% of the world.

Chinese stocks have historically traded at a premium due to their growth. However, I would probably wait for a pullback to pull the trigger. With the near 100% run Chinese stocks had in 2009, it's prudent to wait at this point.

At 30x trailing earnings, Shanghai stocks are priced for extremely strong growth going forward. And the China bears do have some good points, especially the dependence on stimulus spending.

That said, if we do get a big pullback, I'll be looking to add to my Chinese ETFs — PGJ in particular.

There are a few stocks that are worth a look, but I'm steering clear of the broad-based index funds for now. I recently found a small-cap stock that looks great here. It's China Security & Surveillance Tech, and trades under CSR. It's dirt cheap, trading at a 10x P/E with strong growth prospects.

P.S. As I said, China has seen stellar growth in its auto industry. And that growth will continue as a massive middle class grows hungrier for personal automobiles. Amid the fray, one tiny company has made a huge impact on the auto market in the Middle Kingdom. This report has all the details about the Chinese growth company some analysts think could grow into the world's largest carmaker.