A Rising Tide of Foreclosures

As sure as the two cardinals that are perched outside my window, I'm beginning to think that Lawrence Yun could use a lucky rabbit's foot or two.

Better yet, maybe he ought to consider spending the day combing through the grass in search of four-leafed clovers...

Either way, he can use all the help he can get this spring.

Because as any honest realtor will tell you, the next few months of activity are the ones that will set the tone for rest of the year. And given the ongoing free fall in housing, it is make-or-break time for the 2010 housing market.

As the NAR's chief economist is well aware, the open houses will either be on the quiet side this spring, or jammed with those buyers that Yun insists are still somewhere on the sidelines.

All I know is that after hanging his hopes on these mysterious folks for the last two years, Yun's sideline buyers have yet to materialize — even though all the king's horses and all the king's men have tried to lure them out of the woodwork.

The 2010 Housing Market Teeters on Edge

Meanwhile, the pain of those trapped by the fantasy of the bubble continues to grow as REOs and foreclosures add more supply to the bloated market.

In fact, based on data from the one of the nation's biggest mortgage servicers, nearly 7.5 million loans are in some stage of delinquency or foreclosure, while an additional one million properties are already bank-owned.

That's an 8.5 million "shadow inventory" of homes that needs to close just to clear the overhang of distressed properties alone. At present sales rates, that represents a nearly two-year supply.

Keep in mind, of course, that those are static figures. Three months from now, those figures will be even worse; 346,000 borrowers became delinquent for the first time in January, adding to the burden.

What's more, with nearly one-quarter of U.S. mortgages now "underwater," almost 11 million borrowers are now trapped in loans backed by assets, the value of which is dropping like a stone.

As a result, more and more homeowners are just simply walking away from their troubles — even when they can afford the payments.

For borrowers like Wynn Bloch, walking away was nothing more or less than a business decision, plain and simple. A retired psychologist, Bloch is a renter today after defaulting on her $385,000 2006 home purchase.

"There was not a chance that house was ever going to be worth anywhere near what my mortgage was," Bloch told the LA Times after finding out that comparable homes in her neighborhood were now selling in the $200,000s.

Hardly alone, these strategic defaults accounted for about 35% of the December 2009 defaults — up from 23% in March of 2009, according to Luigi Zingales, a professor at the University of Chicago's Booth School of Business.

Think of it as a "thanks, but no thanks" on a grand scale.

We're from the Government and We're Here to Help

As for the alphabet soup of government programs designed to stem the foreclosure tide, they might as well be trying to drain the ocean with an eye dropper. Like everything else in this bust, it is extend and pretend all the way; nearly 70% of all modified loans re-default within 12 months anyways.

Take HAMP, for instance: This is the Home Affordable Mortgage Program that was supposed to save millions of homeowners from foreclosure.

According to the U.S. Treasury, just 170,000 borrowers nationwide have had their loans permanently changed under HAMP. That's a mere 5% of the 3.4 million borrowers who are eligible under the program.

But even then, that's only half of HAMP's problems. The other is — for the most part — the majority of these "saves" have only delayed the inevitable. Take a look: 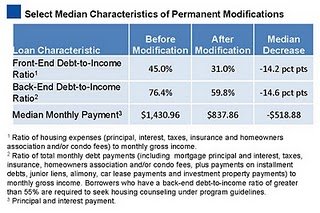 Consider this: Even after receiving a permanent modification, the median HAMP borrower is still left with a debt-to-income (DTI) ratio of nearly 60%! That ratio is simply off the charts — and it's an improvement from their previous loan.

In fact, before the industry jumped the shark, a 41% DTI was considered high in a more rational time.

Just think about it... After paying the mortgage, installment debt, alimony, 2nd liens, and other fixed payments, these median borrowers are left with just $1,086.52 before taxes to pay for everything else.

That leaves about $200 a week to pay for groceries, utilities, insurance, repairs, and other expenditures.

And while that is better than the $125 a week they had before the modification, it's nowhere near enough to keep the majority of them from defaulting in the future. The numbers simply won't add up.

As a result, the foreclosure crisis will undoubtedly be with us for some time, weighing heavily on the housing market. And I haven't even brought up the prospect of the option arm debacle that will begin to bust later this year.

Existing home sales dropped 7.2 percent in January after falling 16 percent in December — the biggest declines since comparable records began in 1999, according to figures from the National Association of Realtors.

And keep in mind that's with interest rates on a 30-year fixed rate under 5%. As the Fed pulls out of the mortgage market in the next two weeks, those rates have nowhere to go but up.

And according to my mortgage pals who have over 40 years in the business, this is the sum of all fears.

"Steve," they told me last week, "if rates go over 6%, you can stick a fork in it because at those levels, it's game over for housing." Already it is as bad as they have ever seen.

So maybe Lawrence Yun is just being optimistic when he says, "We will see weak near-term sales followed by a likely surge of existing-home sales in April, May, and June."

Personally, I think he would be better off rubbing Buddha's belly.

P.S. Let's face it: We're nowhere near the end of the foreclosure crisis. Yet, as bad as it sounds, our own Ian Cooper has discovered three simple ways to profit from it all. We're talking about companies that profit when homes are foreclosed.

And Ian believes these companies will be quite busy — and profitable — over the next few months. In fact, one of them is already up 20% in just last few days. To learn more about this opportunity, click here.