Tellabs and the Smart Phone Tsunami

TLAB: Poised to Profit from the Smart Phone Tsunami

If you've ever tried to use an iPhone in New York City, you know firsthand how badly wireless networks need to be upgraded.

People aren't happy with slow wireless, and providers are being forced to upgrade to meet demand. The market is projected to grow at an astounding annualized rate of 131% until 2013, as this chart from Cisco shows: 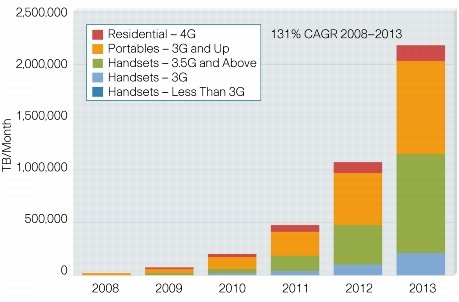 Growth like that should set alarm bells off in your head.

Because certain companies are going to make a killing off this inevitable — and huge — wireless upgrade cycle.

One of them is Tellabs (NASDAQ: TLAB), and I think it's a buy here. Let me explain why.

First off, Tellabs is a $2.6b company sitting on $1.3b in cash. Debt is minimal at $268m. They're profitable and the company just started paying a dividend this quarter (current yield: 1.2%). Their balance sheet is immaculate. Management has been on a cost-cutting crusade over the past year and is now shifting the company's focus to high-margin products.

While TLAB should also benefit from the wired broadband market, wireless is where the real growth is at. Demand for their wireless data management products soared 52% last year. According to Reuters, Tellabs CEO recently said at a recent conference that he expects 60%-70% growth in 2010.

Smart phones like Apple's iPhone are pushing wireless networks to the breaking point. Customers are using more data than expected, earlier than expected.

Apple took the industry by surprise with the iPhone; it was the first mobile product that's truly fun to use on the web. But they're not the only company with a great web phone anymore... Their lead is slipping, and demand on 3G and 4G networks will only get heavier as competitors like Google and PALM catch up.

Tellabs has products to help solve these data problems. One of their new releases — the Smart Internet Breakout Gateway — is a good example. The name is a mouthful, but the product has big potential. The Gateway routes traffic and data more efficiently through mobile networks, saving bandwidth and improving performance. It's currently being tested by major mobile operators.

TLAB has just about everything I look for in a stock: a rock-solid balance sheet, a strong growth catalyst, and a dividend (albeit a small one).

There's also some buyout potential, but that's not on top of my list. Tellabs has great technology, a portfolio of intellectual property (patents), and a pile of cash. When recently asked about takeovers, the company's CEO said, "There have been inquiries over time but we are still a standalone company and we like it that way and so do our customers."

So a buyout may not be on the table in the immediate future, but it's always a possibility. Small strong companies like TLAB are attractive acquisition targets. Especially with giants like Cisco sitting on $40b in cash...

If the price were right, I'm sure the board would come around.

P.S. By now, you've heard all about the devastating 8.8 earthquake that hit Chile over the weekend. From a purely investing standpoint — as my Crisis and Opportunity colleague Christian DeHaemer agrees — any significant pullback would be a buying opportunity. Chile is a strong country — and much better-prepared than Haiti to handle a situation like this. I expect them to rebuild rapidly and come back stronger than ever. I'll be watching the iShares Chile ETF (NYSE: ECH).