Is Russia Moving to a Gold-Backed Currency? 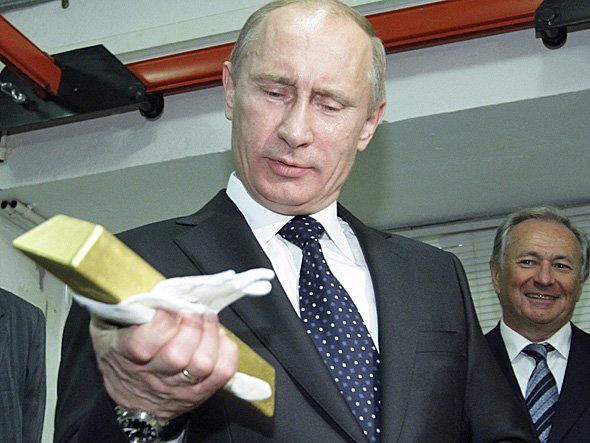 While the IMF still reports the United States as the largest holder of gold reserves by far, these are essentially self-reported numbers. They are not reliable because countries could have incentives to under report or over report their gold reserves.

It is thought by many that China, at least up until this point, has under reported its gold reserves. It seems the Chinese have been accumulating more and more gold over the last several years.

Interestingly, Russia tends to get less attention. It's a smaller economic power than China, but still not to be ignored. The Russian central bank recently announced that it bought 30 tons of gold in March.

According to IMF statistics, Russia is the 5th largest holder of gold, not including the IMF itself. China is just behind Russia, but it would probably jump up the ladder if it reported its true gold reserves.

There was an opinion piece in the Washington Times saying that you should worry because Russia is hoarding gold. I have to disagree. You shouldn’t worry, unless you happen to be a U.S. politician or central banker.

Usually I read stories about how China is going to back its currency with gold and knock out the dollar. In this Washington Times piece, the author talks about a gold-backed currency for Russia.

I don’t discount this as impossible, but it's still highly unlikely at this point.

Russia has politicians and central bankers just like everywhere else. They may feel their backs are against a wall and have less to lose, but it's hard to imagine a bunch of political officials giving up power, unless the population heavily demands it.

Giving up a fiat currency and setting up a gold-backed currency severely limits government power. If followed, it essentially ends the need for a central bank, at least as we know it today. It would be hard to believe that Russian officials would voluntarily do this.

It seems that Russian officials are actually doing some rational things these days. The central bank there allowed interest rates to go quite high in order to stabilize the ruble. They have also been selling off U.S. Treasuries, and now we have the story of them accumulating more gold. What's going on?

I believe much of this stems from the tensions between the Russian and U.S. governments. With the situation in Ukraine, U.S. politicians foolishly imposed sanctions against Russia, and in particular, certain Russian officials.

It has actually left Russian officials with few choices. They are basically being forced to abandon using the U.S. dollar in international trade because of the sanctions from U.S. officials.

Meanwhile, it seems that Russian officials are taking the opportunity to trade these U.S. Treasuries for more gold. From the standpoint of the Russians, this makes perfect sense. They are certainly going to rely on gold more at this point than promises from the U.S. government, especially when the U.S. government is making it difficult to even use dollars.

I don’t think this is a move to officially back the ruble with gold. It's more likely a move to stabilize the ruble. It may also be a move to poke a stick back at U.S. politicians.

I stated above that you should not be worried. U.S. politicians may have reason to worry. If more countries start doing what Russia is doing, then the U.S. dollar is going to lose power globally. It does not have to be used as a middleman as much as in prior times.

This may hurt the American consumer in the short run, but it would actually be beneficial in the long run. The reason is that it will make it tougher for the U.S. government to run huge deficits.

Right now, there's a global fear that's driving investors into government debt. Despite selling from Russia, interest rates have remained low in the U.S. They are negative in parts of Europe.

But there will come a day when it will be harder for the U.S. Treasury to find buyers of its government debt. The Fed can’t buy forever without risking severe price inflation. If China and Japan ever follow Russia’s lead, then it will make it more difficult for the U.S. government to spend so much money. In the long run, this will help the average American.

Russia is probably not going to issue a gold-backed currency. It's not going to overtake the U.S. economically in any way. However, the Russians can set a good example of smarter economic policies moving forward for some of the other big players such as China and Japan. That includes exchanging U.S. government debt for gold.