I have exciting and profitable news to share with you today, so I'll get into it without wasting any time.

Just when I thought it was dead in the water, the solar industry is undergoing a rapid expansion.

Don't roll your eyes... If you miss this, you're missing easy gains.

As we enter the second half of this year, official investment numbers are being reported from 2011.

The solar industry unexpectedly grew to a record $91.6 billion last year, up from $71.2 billion the year before.

But that's just the beginning...

This surge happened so fast, the stocks haven't caught up yet.

Yes, it's true solar stocks have been brutalized over the past year. Yes, it's true there were notable bankruptcies in the industry.

But I'm officially declaring a bottom.

The time to buy is now.

Even though the solar industry posted record growth last year, it's only the beginning of a massive turnaround. And acting now will ensure the biggest gains for your account.

As the Clean Edge industry report that compiled these figures noted:

These market numbers, while impressive, do not fully capture the extent of actual industry expansion. While total market revenues were up 29 percent, installations climbed more than 69 percent from 15.6 GW in 2010 to more than 26 GW worldwide last year. This reflects a more than 40 percent decline in crystalline module prices between 2010 and 2011.

What Does That Mean?

It means the cost of solar panels is falling extremely fast.

And as the price falls, demand is surging. Installations were up almost 70% year to year.

To put that in perspective, demand for oil was flat. No growth.

That's what I love about the solar industry: It's still so tiny that years of explosive growth are ahead of us.

The era of solar subsidies is over.

Panels are getting so cheap that people will soon be begging to have them installed on their roofs.

Between now and 2021 we project that installed costs for PV will continue to decline, falling to nearly one-third of their current levels.

That implies another 42% growth for solar in less than a decade. Hardly any other industries are growing that fast. And all the growth is thanks to the rapid fall in the cost of solar.

It's almost funny, because all you hear in the mainstream is how expensive solar is. And that used to be correct.

As recently as 2010, electricity from solar panels cost as much at $0.30 per kilowatt-hour. If you pay the bills, you know that's a lot. I pay about 9 cents here in Maryland.

And by 2012 — when the market will be worth hundreds of billions — solar electricity will cost as little as 5 cents. 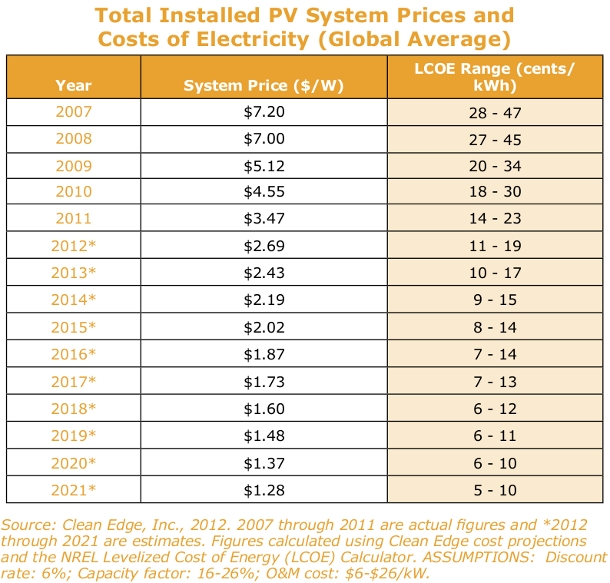 This market will take a lot of investors by storm and leave naysayers in the dust.

Don't be one of the latter.

Now is the time to invest in the companies that will profit the most from reducing the cost of solar.

It's not going to be the popular solar names you've probably already heard of. Those guys will be fighting for pennies per panel.

Instead, I've found one company that has a special coating process that all other solar companies can use. It's a simple process that can double the output of current panels while cutting the cost in half.

And this company will license to any solar production company.

The stock is still below a dollar, but customers are lined up from North America, Europe, and Asia.

This one's going to take the market by storm. Make sure you see it here first.