Putin Out, Poland Up, Gold Falls, Brent Jumps and More...

Gold Will Go Down, Then Up

Look for gold to flat-line around $1,500 an ounce in the first half of the year and bounce heading into the 2nd half. 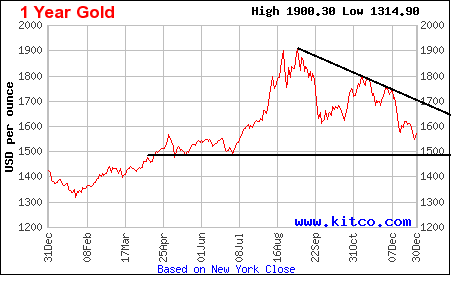 As you can see by this one year chart we've been in a down-trend since August. 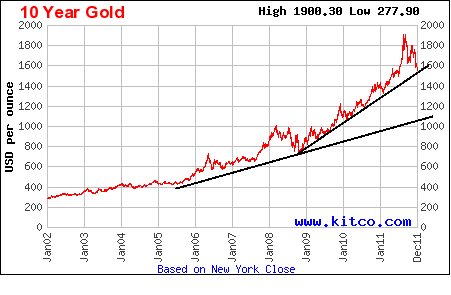 There is support around $1,497 an ounce. If the price falls through that level we are getting to $1,000 real fast. Remember, no one ever went broke taking profits. Gold won't cry if you sell it.

My paternal grandmother was from Lithuania. Family lore has it that she was carried as a baby over the border – with the help of a well-paid guard – to escape the communist threat in 1919. When I was in the Navy a guy named Miles from Philly told me “a Lithuanian is like a Pollock with his head kicked in.”

For that reason and none other, I'm a fan of Poland. I'm glad to see them on the rise. Poland has low debt, strong growth, a solid balance sheet and a large population of 38 million.

The Mall of America was overrun last week by Bloods or Crips – I can't tell the difference between these thugs. One group wears a blue handkerchief and the other wears a red one. They are like sneetches with glocks and bad aim. Alas, look for this type of twitter generated mayhem to continue. (By the way I am selling flashmobriot.com if you are interested.)

There are hundreds of thousands of people marching in the streets of Moscow. The shoe in for the next president of Russia is looking vulnerable. He will cheat his way at the ballot box to garner a majority of the vote, but the backlash among the population will force him to resign citing his health.

This will set up the best “blood in the streets” play of the year on cheap Russian stocks. Vimpelcom (VIP:NYSE) – my favorite Russian telecom – pays a 15.80% dividend, has a PEG of 0.76 and $3.56 billion in cash. Look to buy at the height of unrest. The riots will be bad for its share price but great for its balance sheet. It will make even more money as the mob texts their righteous anger.

The U.S. Will Embrace Hydrocarbons

Next year the Bakken will pass Ecuador in production output. As Brian Hicks wrote yesterday, “The Bakken, Marcellus, Eagle Ford, Utica, Piceance, and the Greater Green River Basins will be the buzzwords in energy for 2012 — and quite frankly — for the years to come.

Cheap energy, less power to OPEC, jobs and growth — what's not to like?

Iceland Tells the Banks to Stick it

The scare tactics used by Wall Street and Washington to bail out the banks at the top of the credit crunch ensured that they'd live to rob another day. But in Iceland they said enough was enough and decided to let the banksters stew in their own juices. It's paid off.

Iceland defaulted on $85 billion of debt. The pundits and talking heads said their country was finished. They were wrong. This year, Iceland GDP grew by 2.5%, and it is forecast to grow by 1.5% next year. That's pretty good. Capital controls are being relaxed, and the currency is strengthening. It seems you don't need to bailout the banks after all.

All these companies have lots of cash, solid businesses and pay a nice dividend. In the 1930s the companies that paid a dividend produced the highest returns over the decade. Make sure some of your safe retirement cash like your IRA and 401k is in blue-chip tech stocks that pay a dividend. It's a good feeling to know you'll make 7% next year.

The price of West Texas Crude was up 13 percent last year. Look for the price to continue to bounce around $100 in the first half of the year. In the second half, growth in China, Brazil and Germany – coupled with Iran sanctions - will push the price of Brent Crude to $135.

Chinese national oil companies will continue to court East African countries in order to secure their energy needs. East African oil is one of the seven last under-explored places with evidence of huge hydrocarbon deposits. It's the next international oil boom.

It seems like everyone I talk to is in cash. No one believes in equities anymore. 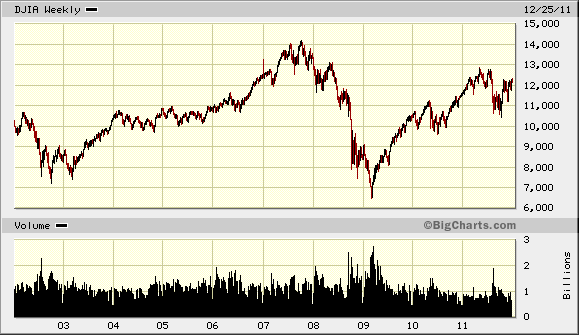 You can make a strong case that in 2012 unemployment will drop, housing will tick up, South America will boom, and Europe will calm down.

It's not hard to envision a string of positive market events that put 1,700 points on the Dow. A drop of unemployment from 8.6% to 7.6% would add 1,000 points alone. Toss in some M&A activity, stronger banks, and some increased exports and we are right back at the old high.

I'm not guaranteeing it will happen – but there's a good shot it will.